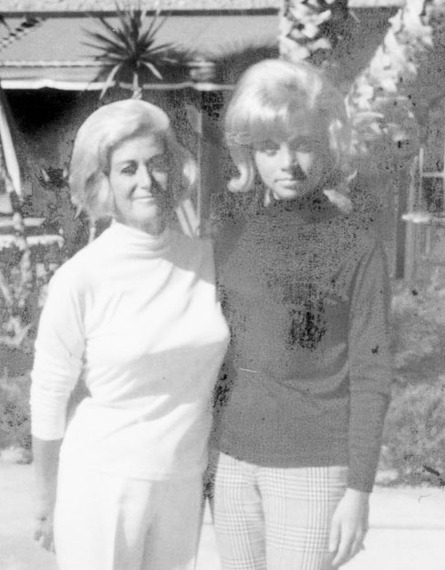 Perhaps Judy Jaffe Gelfand saw the demon coming after the disease had stolen her mother; she never spoke about it. Alzheimer's often pursues in cunning stealth until the demon pounces. Such talk then was taboo, as was talk years earlier of cancer -- the "Big C," a conversation expressed quietly, almost in hand signals, in closed circles, in the family kitchen.

So Judy, as her mother had done and as instincts guided, led by a heroic example that inspired her family, underscored the need to find a cure for Alzheimer's, and inspired a nation to talk about this haunting disease that seems locked on to a gender, affecting women far more than men.

The math is numbing. To say that Alzheimer's disease disproportionately affects women is an understatement parallel to saying that Judy Jaffe Gelfand had the courage and heart of a legion of fighters.

Observes Judy's daughter Elizabeth Gelfand Stearns, co-producer of the Oscar-winning film Still Alice, "As the smash Broadway musical Rent asks us to consider: 'How do you measure a year? In daylights, in sunsets, in midnights, in cups of coffee, in inches, in miles, in laughter, in strife.'"

Perhaps all of the above.

Like the fictional Harvard Professor Alice Howland in Lisa Genova's bestselling novel Still Alice, Judy Gelfand, a pianist at the Julliard School of Music, has become a face of Alzheimer's and a barometer of the tempest that is brewing. Women are at the epicenter of this disease. More to the point, says the Alzheimer's Association:

So do the math.

"As tragic as it is, Alzheimer's picked the right person in Judy Gelfand," says Elizabeth in an interview. "We all stood by, watching her slowly fade, a heart breaking train wreck for our family. Yet in spirit, my mother fights on."

It is the spirit of The Judy Fund that offers the greatest promise igniting awareness of the staggering number of women afflicted with Alzheimer's. Since its establishment 10 years ago, The Judy Fund has raised more than $5.5 million to support Alzheimer's research and advocacy in partnership with the Alzheimer's Association.

"The Judy Fund is a wonderful example of how one family chose to transform loss into action, honoring Judy, while also working to change the future for millions," said Angela Geiger, Alzheimer's Association chief strategy officer. "Over the years, The Judy Fund has contributed to Alzheimer's Association mission activities including, research, care and advocacy, and most recently the focus has been on raising awareness and learning why women are disproportionately impacted by Alzheimer's disease, says Geiger.

"The gifts of my mother continue to flow," says Elizabeth. "She is present in our family's lives, a role model to strive for. She was a beautiful woman physically and at heart until her last breath. In Alzheimer's, she had incredible capacity to still be Judy, even in her silence. That's also the power of the message of Still Alice.

"There needs to be a much better plan in place today than there was for my mother and my grandmother" states Elizabeth, "the tragedy for them, is that there was no plan in place."

To fight an enemy, one must study the enemy, and have a plan. As the great Chinese General Sun Tzu, author of The Art of War, once counseled, "Tactics without strategy is the noise before defeat." The Alzheimer's Association does have a plan in place, but not adequate funding. Not even close. Consider the issue of how Alzheimer's is impacting women.

"We've never really taken the time to figure out why," says Elizabeth. Historically, she says, science and trial studies have ignored women.

Most of the research studies, to date, have been done on men. Surprisingly, with the high incidence of Alzheimer's among women, a gender under siege, there has never been a comprehensive study done of women's brains and Alzheimer's. With an increase in the number of woman diagnosed, we are now at a tipping point--an irreversible moment in time, like a glass of fine Bordeaux Cabernet Sauvignon spilling over onto a white-linen table cloth. Standing up the glass will not retrieve the wine nor will it remove the crimson stain.

Of particular concern, says Elizabeth, is the fact that 66% of the Alzheimer's population here in the US are women, and those women share another biological fact - the loss of estrogen through menopause. When studied, this estrogen loss may be a factor that leads to deficits in brain metabolism that could lead to Alzheimer's. While women live longer than men, the estrogen impact could be significant. In short, the manner in which women's brains change later in life could put them at higher risk for Alzheimer's or a decline in cognitive function.

Beyond the hunting symptoms, beyond the disturbing statistics, beyond the cost of caregiving is the stark fear--fear of losing self in a slow death of a thousand cuts, exacerbated in families with a history of Alzheimer's.

"Am I afraid? Of course I'm afraid," says Elizabeth Gelfand Stearns. "I lost my grandmother and my mother to Alzheimer's. I'm a face of this disease."

Following lines of the family tree, Elizabeth and her husband Richard fear for their three children: Ella, 15, a high school sophomore; Jackie, 20, who's working this summer at the University of Wisconsin's Alzheimer's Research Institute; and Greg, 23, an engineering major at the University of Michigan.
"But I've decided there's a lot I can do," says Elizabeth. "There's a lot we can all do to stop Alzheimer's. That trumps my fears."

And like Elizabeth, my mother, Virginia Brown O'Brien, is the hero of my life; she taught me courageously how to live with Alzheimer's in faith, hope and humor, refusing to give in until the demon consumes.

Elizabeth and I have bonded.

"Yes, I'm afraid," says Elizabeth again, as we talk about our mothers. "I don't want this disease. We can make a plan, and do far more in funding and research for a cure. We can do it in our lifetime. The fear of Alzheimer's drives me. There's no way I'm going to just sit back and allow this diseases to keep going. Not happening. No way!"

Judy Jaffe Gelfand is smiling. Her daughter makes her proud.

Greg O'Brien's latest book, "On Pluto: Inside the Mind of Alzheimer's," has won the 2015 Beverly Hills, the 2015 International Book Award for Health, and is a 2015 Montaigne Medal Finalist as well as a 2015 Eric Hoffer Category Finalist. He is also the subject of the short film, "A Place Called Pluto," directed by award-winning filmmaker Steve James, online at livingwithalz.org. In 2009, he was diagnosed with Early Onset Alzheimer's. His maternal grandfather and his mother died of the disease. For more information go to: OnPluto.org. O'Brien serves on an Alzheimer's Association advisory group for Early Onset Alzheimer's.