The Jung-Kirsch Letters: The Correspondence of C.G. Jung and James Kirsch (Routledge, 2011) is one of the more amazing books to surface in recent publishing history. This book will not be a bestseller and may only be read by a handful of people who are interested in the extraordinary history of ideas and the world that flows through it. But, this correspondence is recommended to anyone who actually cares about how the modern exploration of psyche unfolded in the early and mid twentieth century. The relationship between Jung and Kirsch as revealed in this exchange of letters is highly complex. At times it reads as a privileged communication between doctor and patient. At other times, Jung appears as the guru and Kirsch as the eager disciple seeking the wisdom of the master. And then there is Kirsch as a practitioner in his own right requesting consultation in puzzling cases with fascinating symbolic material emerging from the unconscious. And there is Kirsch and Jung muddling through the politics of establishing an international movement. And, most dramatically, there is Kirsch the young Jewish disciple writing from Palestine and challenging Jung the older master on the question of Jung's relationship to Jews and Judaism in 1934. Dream interpretation, transference and counter transference, theology and politics, all course through this exchange. The reader has the opportunity to imagine his or her way into history, the climate of ideas, the challenges of a world erupting with inner and outer demons on every front as psychoanalysis is gaining a foothold in a world in turmoil. 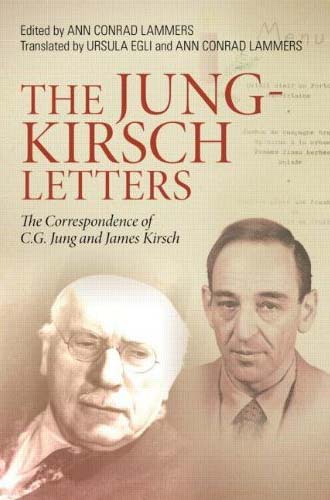 As a fan of spy novels, I found myself spellbound by the evocation of place, time, pace, events and the style of ideas and relationships that unfolds in these pages. Like a good spy novel, what is not said and the gaps that the reader has to fill in makes it all the more intriguing in following the exchanges between Jung as mentor, teacher, colleague, and guru with Kirsch as colleague, student, patient and soul searcher in quest of his own individuation. Almost always, Jung seems too busy to answer Kirsch's entreaties to interpret a dream, help with understanding a difficult patient, present at a seminar or make himself available for a consultation but that does not stop the flow of material from Kirsch that gets richer and richer with each lack of response from Jung--perhaps like an analysis itself. But, Jung is not always too busy or too withholding in his responses to Kirsch and, at times, he delivers quite amazing interpretations of dreams and other symbolic material. One of the wonderful qualities of this book is that one gets close to Jung, how he actually relates to individuals and how much he clearly cares for his younger colleague. The same care is evident in the extraordinary editing of the book with wonderfully informative footnotes by Ann Conrad Lammers and seemingly effortless translation by Lammers and Ursula Egli.

The first letter of this volume begins with Jung's response to Kirsch's request for an hour of consultation in November, 1928. Jung is 53 and in the prime of his career, almost twice the age of Kirsch who is only 27 and just beginning as a psychiatrist and Jungian analyst. Jung responds to Kirsch's request for a meeting with professional formality, even distance:

I'm afraid it's quite impossible for me to reserve time for you in January (1929), since my time is already fully accounted for. The earliest date when I could work with you in person would be in early May, and if you decide on that I have to ask you to let me know as soon as possible, since I always have to book my appointments far in advance.

The correspondence begins rather modestly but it is not long before the reader is launched into one of the most significant recorded exchanges in the history of psychoanalysis when Kirsch, writing from Tel Aviv, challenges Jung on anti-Semitic charges that are circulating about him in Palestine.

The story of Jung's relationship to Jews and Judaism, along with his alleged pro Nazi, anti-Semitism, is a highly complex and subtle narrative that will not be solved by any one book or review of any one book. But, this correspondence adds to the record most important and intriguing first hand material in which Jung pens his own responses to allegations of anti-Semitism in response to the direct questions from his young, Jewish disciple, who challenges Jung in the early days of the rise of Nazism. For instance, in response to one of the more virulent allegations about Jung's attitudes to Jews that Kirsch raises, Jung responds: "It is a downright lie to maintain that I said Jews are dishonest in analysis. People must think me extraordinarily stupid if they really think I could hold such an opinion." (p. 45)

Kirsch's responses to Jung's explanations are equally fascinating in the way in which he first challenges his guru and then rather miraculously finds a way to defuse Jung's reckless and inflammatory statement that the "Jew... will never create his own form of culture, because all his instincts and talents presuppose a more or less civilized host-people for their development." (p. 42) Kirsch asserts that the "host-people" idea in Jung arises from the fact that Jung's only real experience with Jews comes from his contact with Jews such as Freud who suffer the "soulless materialism" (p. 52) of the "Galut" Jew (p. 42) who has been exiled from the Temple, assimilated into European culture and is therefore estranged from the real Jewish spirit. Essentially, Kirsch lets Jung "off the hook" because Jung hasn't had contact with a real Jew so it was easy for him to come to false conclusions about the role of Jews in cultures other than their own. What makes Kirsch's formulation so ingenious is that he manages to find a way to release Jung from the accusation of being anti-Semitic and simultaneously kill off Freud as a "galut", the equivalent of a betrayer of the real Jewish spirit. It is pretty amazing stuff and each reader has to work out the mystery of what is real or true for himself. The issue remains absolutely relevant today because every Jew has to ask him or herself if he is a "galut" or not a "real Jew" if he doesn't support Israel.

We do not live in an era in which our public discourse about conflicts between individuals and groups is noted for its complexity and subtlety. Simplistic, dogmatic opinions purveyed by screaming partisans on all sides is the style of our times in which people demand answers to problems before they have even asked the questions. This has been true of the question of Jung's alleged anti-Semitism for almost 100 years. But, just reading Jung's passionate response to the allegations that Kirsch raises directly with him in their 1934 correspondence makes this book a rare treasure--and that exchange is really just the beginning of what they have to say to one another over the next several decades. Indeed, comparing the content and tone of the 1934 exchange of letters about anti-Semitism with the final letter Jung writes Kirsch in 1960 signals the vast terrain that they cover in that long stretch of time. In Jung's final letter to Kirsch in 1960, he fiercely warns Kirsch of the dangers of becoming identified with the God image that dwells inside each person.

Their correspondence spans thirty-two years and comes to an end when Jung is 85 and Kirsch is 59 in 1960. In those intervening years, Kirsch has lived in Berlin, Tel Aviv, London, and Los Angeles. Jung has remained in Zurich for the entire time but they have both had several lifetimes of inner and outer transformations that reveal the early development of the depth psychological tradition as it grapples with the nature of soul, matter and spirit in a world challenged by enormous destructive forces dwelling within the individual psyche and in the outer world's collective mania. This book takes one on that journey in a most spirited and intelligent exchange between two fierce souls who dedicated their lives to exploring the innermost secrets of the interplay between the human, the divine, and the demonic.