Start the great debate right now. Is The Jungle Book the best kid's action film ever made? Possibly. Expect to hear both sides of that argument waged by millions over lattes at Starbucks after they exit theaters. Performances. Direction. Script. Production Elements. Special effects. They all blend together seamlessly into a visual wonder and an emotionally satisfying drama. 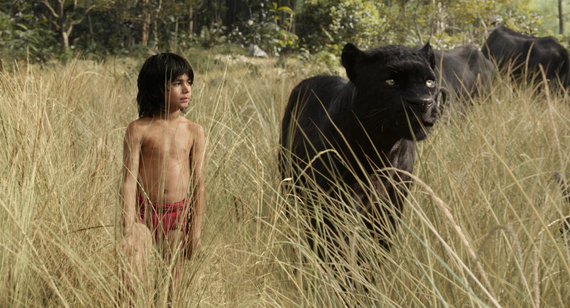 British author Rudyard Kipling, who was born in Bombay, wrote the original children's book back in 1894 and set it in India. The essential storyline involves a kid raised in the jungle by animals who could converse with him. In 1967, Disney adapted Kipling's tale into an animated feature film directed by Wolfgang Reitherman (101 Dalmatians), adding songs, like the popular "The Bare Necessities." Nearly five decades later, with a dazzling array of special effects technology at hand, director Jon Favreau (Iron Man) assembles a top notch tech crew, a brilliant cast and uses the imaginative plotting and dialogue from a screenplay by Justin Marks to craft the ultimate kids' fantasy adventure film.

Mowgli (Neel Sethi) is a man-cub raised by wolves. His protective mom is Raksha (Lupita Nyong'o, 12 Years a Slave) and his father Akela (Giancarlo Esposito, Breaking Bad) is the leader of the pack. Mowgli was brought to the wolves years ago, as a foundling, by the panther Bagheera (Ben Kingsley, Gandhi), who remains his mentor.

When the animals in the jungle gather at a popular lake, seeking water, they encounter a nearly dry sand bed, the result of a severe drought. During these times, the code of the Peace Rock rules: Animals who gather here, must act peacefully. It is the first time Mowgli is exposed to other creatures and he is keenly aware that he is different.

One angry cat won't play nice in the sandbox. It's a rogue, one-eyed tiger named Shere Khan (Idris Elba). He smells the scent of a man, his archenemy, and swears one day he will kill Mowgli. Akela comes to the man-cub's defense, but a threat is issued that could spell doom for the wolves. To avert a massacre, Bagheera is determined to guide Mowgli back to human territory, where the boy belongs. Back to the people who have the power of the "Red Flower," fire. Nothing involving their sojourn goes right. Mowgli meets a selfish bear (Bill Murray) and a menacing gigantic ape (Christopher Walken). Meanwhile, the tiger is relentless. Who can stop him? Legend has it that if they stick together, they can: "The strength of the wolf is the pack. And the strength of the pack is the wolf."

It's a fantasy story, but everything looks real. The trees, rivers, mountains. The birds, reptiles, mammals. The fights, chases, stampedes. An opening scene with Mowgli running through the jungle seemingly being chased by a monster is electric. You know from the very beginning that the tech crew and director know how to ratchet up the action to very compelling levels. And when the action scenes take a break, the viewer is left with scene after scene of eye candy.

Many viewers will claim their favorite adventure sequence. One scene in particular stands out: Shere Khan stalks Mowgli. The boy is chased into a deep riverbed, with the tiger on a bank above. Just as you think this is the end, a herd of water buffalo appears galloping through a trickle of water. They camouflage the son of the jungle, he climbs on one, and they run off into the distance. The riverbed is a deep chocolate brown and so are the animals. It is an indelible image.

Kind critics won't mention where this film was shot. It is up to the audience to discover where the big-branched trees exist, the ancient monkey city is staged and the steep cliff that Baloo and Bagheera climb looms. When viewers find out the exact locations, they will go into shock.

An A-team of special effects wizards deserves applause: Visual effects supervisors Rob Legato (Avatar), Adam Valdez (Maleficent) and Dan Lemmon (The Lord of the Rings: The Return of the King). The visual effects producer is Joyce Cox (Men in Black 3) and the film's animation supervisor is Andy Jones (Avatar).

Neel Seth is the glue that holds the performances together. He's a likable kid-next-door type who is both inquisitive and endearing. You don't want his Mowgli to suffer. On the other hand Idris Elba, as the ferocious tiger does more in a growl and a gravely voice than most actors do when their entire body is on screen. Damn, Shere Khan is evil incarnate. Bill Murray doesn't have to stretch much to play the affable, manipulative bear. Lupita Nyong'o is perfect as the mother wolf; ditto Kingsley as the sage panther.

There are two scenes that are nods to the 1967 animated movie that involve characters breaking into song. Mowgli riding on Baloo's belly as they float down a river singing "Bare Necessities" and Walken as King Louie breaking out in a show tune. These scenes, though they show homage to the first movie, take away from the drama of this movie.

Jon Favreau turns out his finest piece of direction ever with this interpretation of a centuries old story. And the script by Justin Marks builds to a more than worthy climax. Debates will rage about this kids pic's place in film history. Is it the best, or one of the best? That's the kind of a conversation that will thrill the team behind The Jungle Book.