Christmas Eve: You're cooking dinner, late to the party, get your leg tangled in a garland of Christmas tree lights, and knock the tree onto the cat. You come to the corporate party, dance till you drop, get up at 1 pm the next day, wishing that by some miracle humanity has recently invented a more powerful treatment for headaches. You wake up at home, or at your friends' place. In the first case, you can crawl under the blanket and go back to sleep. In the second, you have to get up and go home.

I flew to Paris, and from there by train going north to my final destination -- the port of Calais, which is located next to Europe's largest makeshift refugee camp, "The Jungle."

Stretched across the field are rows of makeshift houses. For construction, anything goes -- polyethylene, tent awnings, and a strange canvas material were stretched over wooden beams. There are houses made of plywood, but more often it's just a tent. Shoes become covered with mud in the first couple of minutes. There's terrible humidity with icy winds, so that it seems that the wind isn't just under your jacket, but under your skin. 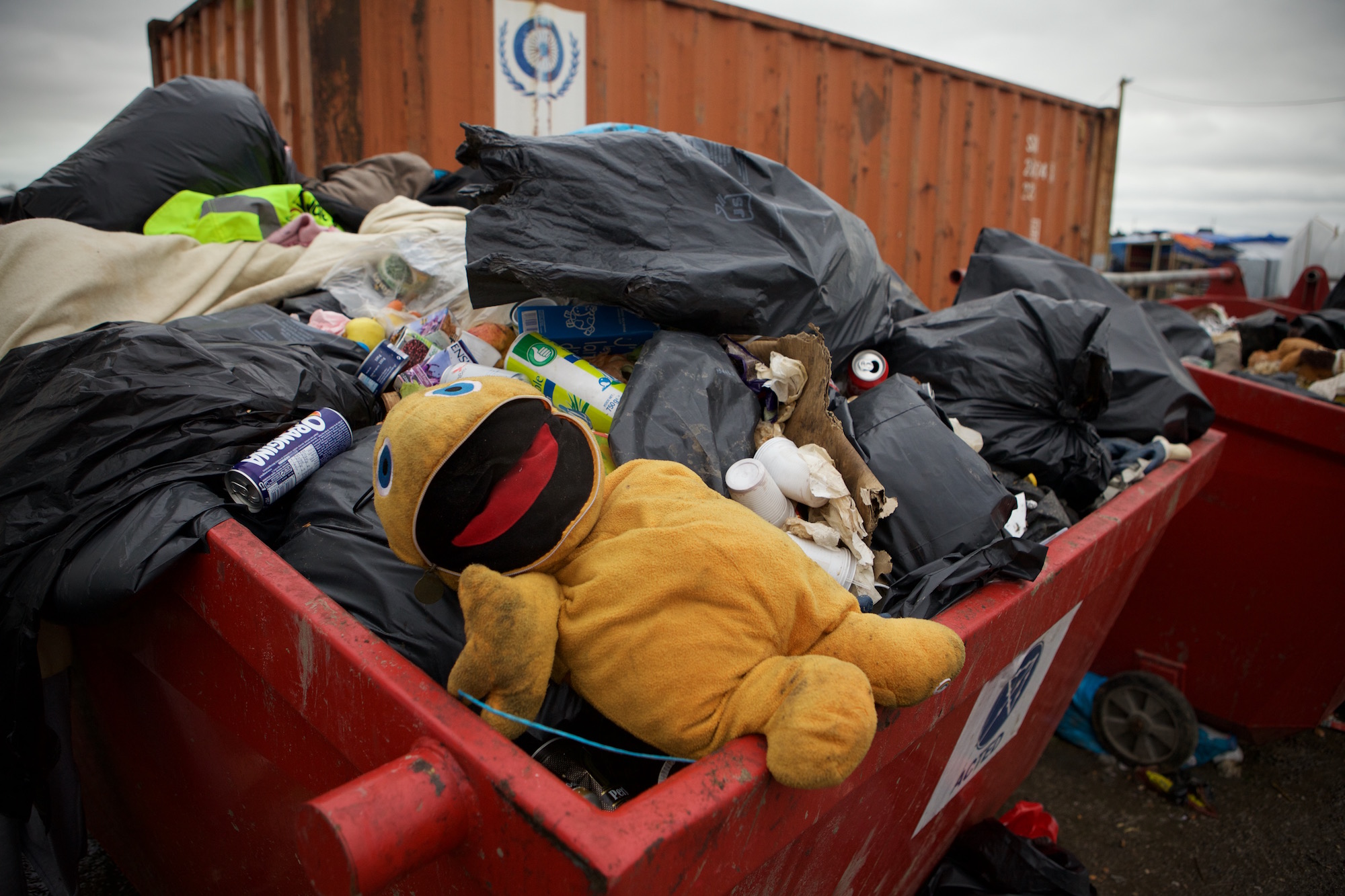 If there, where you once had a house, you were a doctor, engineer, or animator, now you are a stranger. You are not French and non-English. People look at you sideways, clutching their bags tighter and quickly moving away. Your neighbors, the French, build a fence and write, "This house is protected by a dog." A cop sprays you in the eyes with pepper spray because you weren't invited. Officially, this camp doesn't even exist.

Main Street diverges into two sides, and there are actually shops on both in this non-existent city. Shops with food, coffee -- all powered by generators, and every couple of hundred meters there is a pipe with water for washing hands and shoes. In the whole camp, there are four showers, and at the reception for free food, which consists of one plate a day, there is a long queue.

They fled from Libya, Iraq, Iran, Syria, Afghanistan -- a total of more than 10 nationalities. They fled from the wars and armed conflicts, crossing borders at great risk to life, month after month. Now at the camp of more than 4,000 people, a few dozen new refugees arrive every week. Behind them was the Middle East and past life. Ahead is the Strait of Le Mans, which they hope to cross over into the UK. That's the United Kingdom, which everybody talks about. The UK is James Bond, Sherlock Holmes, a big clock tower, and the queen.

If at night you manage to stow away in a shipping truck, a train, or a boat, and if you manage to evade the police on the way over, your mission is accomplished.

London is calling -- I first see graffiti under the road bridge, there is an invisible border camp, there are policemen in flak jackets, high boots to the knee, above which are packs. All the policemen are wearing masks. 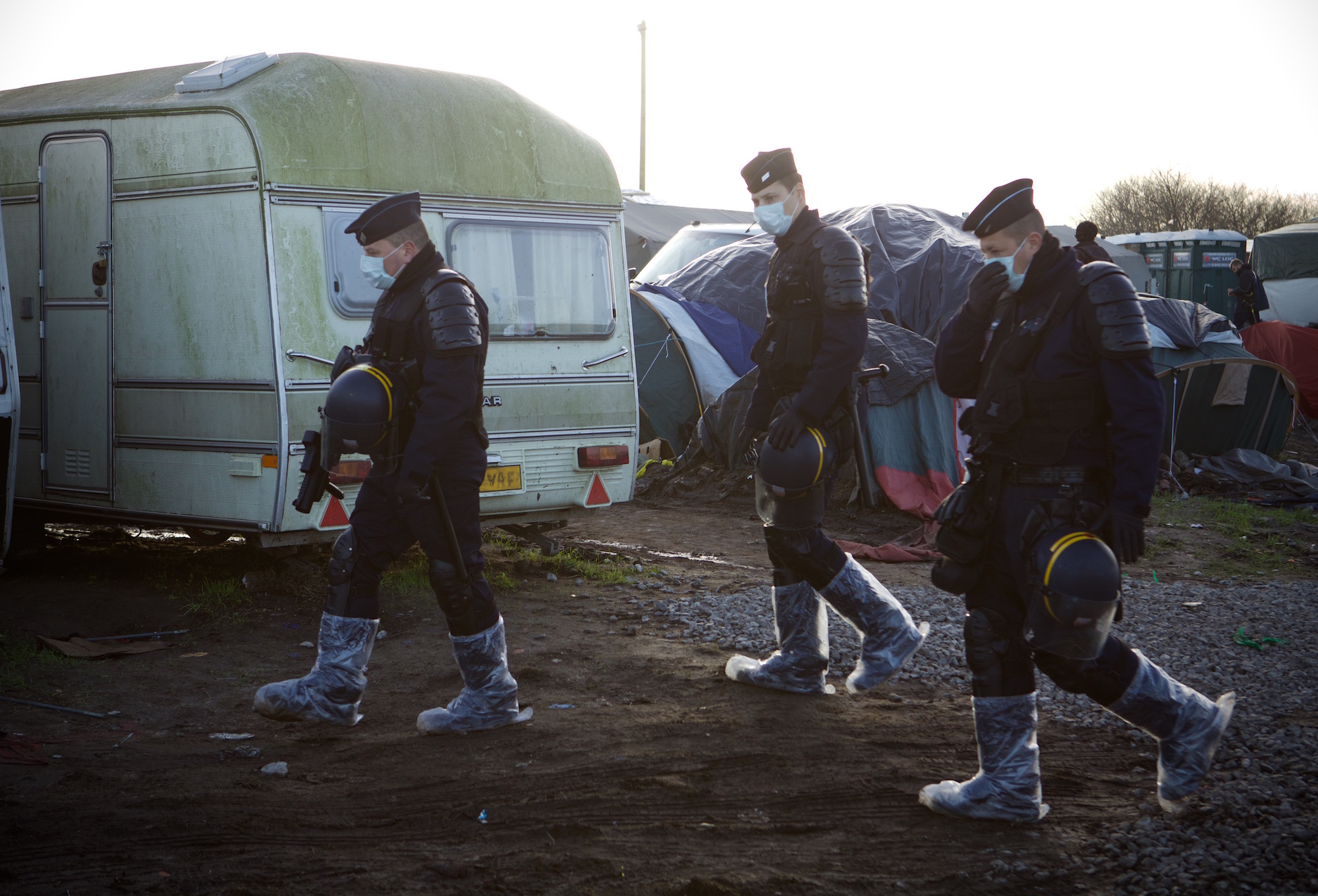 It's because of you that this white policeman is wearing a mask, thinking you will upset quiet European life with infection. Without even asking you a single question he's decided you're dangerous. Your child won't be allowed in any of the local schools.

Eyes are watery from the constant cold.

You cannot take pictures of a person because of fear that they will be used on a wanted poster.

Calais -- a conservative town where most of the votes for the blonde leader of the right-wing National Front party, Marine Le Pen. Here after midnight you can't even buy a cigarette lighter. Previously residents worked at a sewing factory, and now there is one of the highest rates of unemployment. Inhabitants began to flee the city when they realized that the camp is not going anywhere, and will likely continue to grow.

As long as politicians do not know what to do and spend months discussing the migration crisis in closed cabinets, refusing to take a decision, volunteers from Europe come here to build houses, health centers, and bring humanitarian aid. I met one of them on the first night. The volunteer was a student at Yale, one of the most prestigious of U.S. universities, whose faculty accepts lords. He casually walked in a yellow raincoat and told how he learned Russian, went to Moscow, and refused an internship in a luxury bank to go to the camp and help refugees for Christmas.

The camp is divided into different sections by nationality. In the part where the refugees are from Afghanistan there is a huge white ball -- a theater built by two Englishmen Joe and Joe. Come inside and feel like a character in a Stanley Kubrick film. When Joe and Joe came to the camp to build a theater six months ago, many of their friends called it a gamble. "We are here to make camp at least a little more like home," they say. "Refugees believe in the values of the UK and want to live in security."

"If we in Europe call humanity one of our fundamental values, ​​then we cannot leave the people who are turning to us for help to freeze in the field."

All cafes bake bread and people eat it with an extraordinarily divine mixture of vegetables and eggs with hot sauce. Fried rice, beans, spinach. French fries. Brewed milk tea is very tasty and very sweet. When we come out of the theater into one of the Afghan Cafes, they bring us that tea on a tray.

While we are on the road inside the camp, I imagine that the tragedy of the inhabitants of this small suburb seems ridiculous. You took out a loan, paying it back over many years. You bought a house overlooking the field, thought to go and look in the box in the morning. And then suddenly, under your windows there formed a camp with 4,000 residents from the Middle East. If you look at the windows of the houses in the evening, the lights aren't on.

"We have a dream" -- over the letters which were painstakingly applied to the hillside with white paint there is a double-iron fence topped with barbed-wire rings. Surely for each of the hundreds of children in the camp, there was a question: "Why are we living fenced in by barbed wire?" 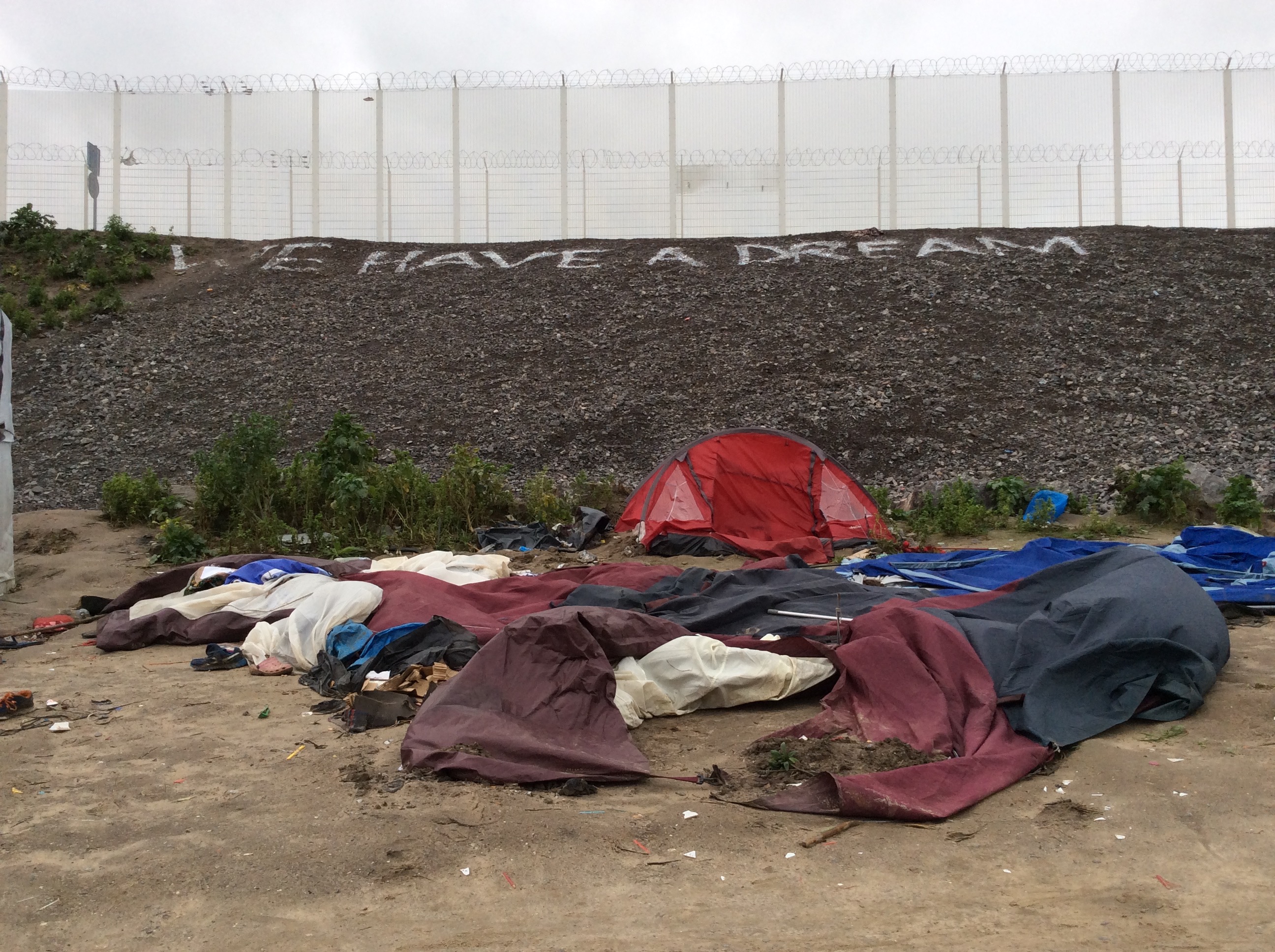 Together with the children we make drawings. On huge sheets of paper the children draw desires within their silhouettes. The first is named Avrist, an eight-year-old from Iraq. Here in the camp he lives in a white trailer wagon. Avrist speaks four languages -- volunteers called him a genius. Inside his silhouette he wrote the word "guitar" and the word "professor." A boy who wants to be a professor but who isn't allowed in any school. 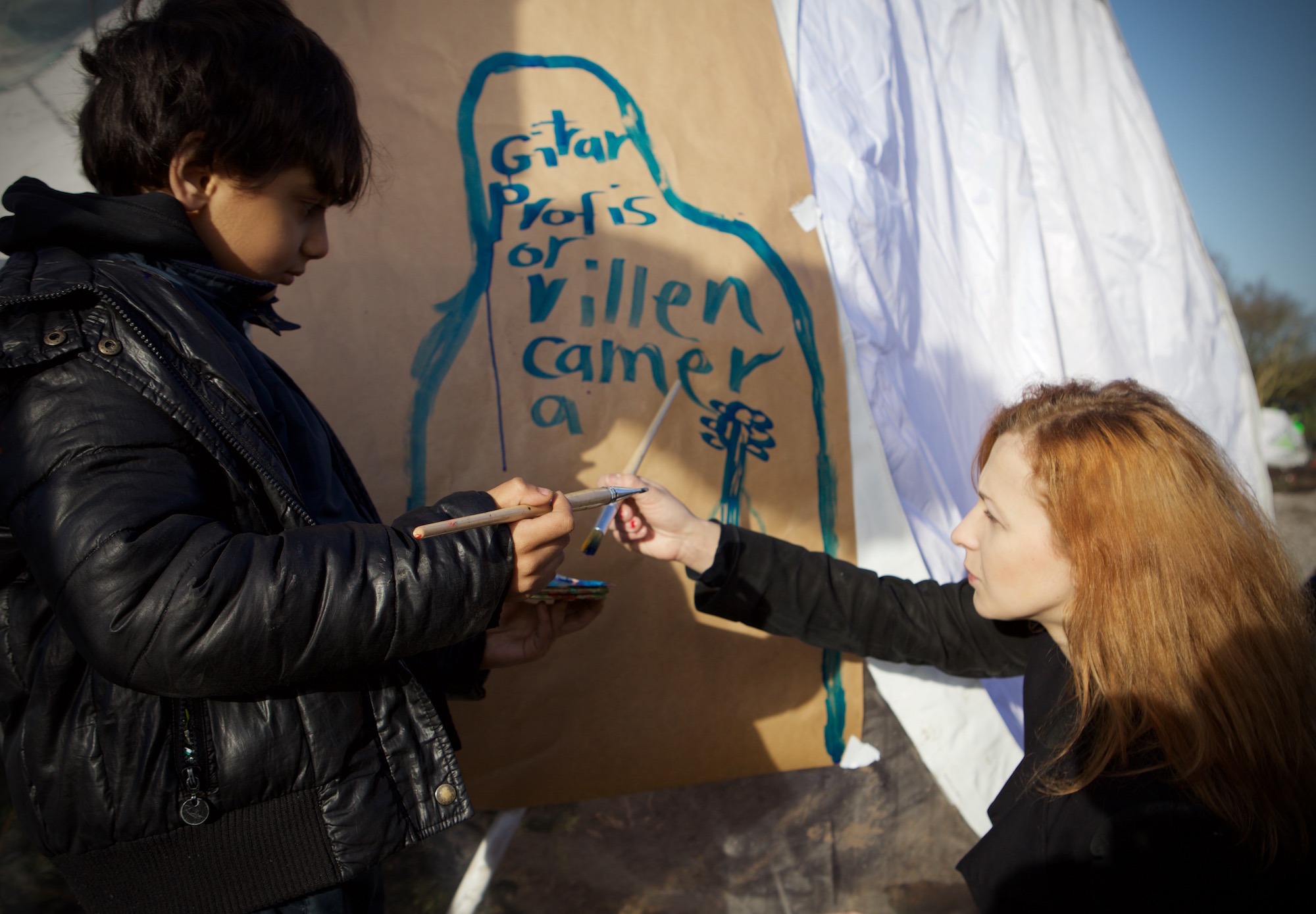 As a child you were told, "If you behave, Santa Claus will bring you a lot of gifts, and if you misbehave -- nothing." What is good behavior? Do not skip school to return home on time. And what would you say to Santa Claus if you're not allowed to enroll in school, and if, instead of the house every night you go back into an icy tent?

At Christmas you can dream of a miracle, or you can try to be the miracle for someone else.

"To Avrist from Pussy Riot and the Belarusian Theatre" -- I wrote on a white piece of paper and put a note in a black guitar case. Buying a guitar in Calais -- that was a quest that deserves a separate story. The city only has one music store, it is not on the map, and all the others are closed down because they do not bring profits.

Miracle -- it's not just a word in a book, but also your purchased ticket to the refugee camps, it is your gift, your two hours in which you listen to the story of one of the refugees because he wants to tell it. Miracle -- it means not turning away someone you don't understand.

My friends from the theater decorate the Christmas tree with the children. Painted in watercolor snowflakes from paper, and origami balls, it is a very beautiful tree. This with the smell of pine needles, this is Christmas, and you are in a warm house next to the photos or pictures on the wall.

Our tree is within the improvised tent to avoid being knocked over by the wind. Right behind it on the wall is a photograph taken by one of the volunteers. In the picture is a hand holding a spent tear-gas cartridge that the police had fired into the camp. 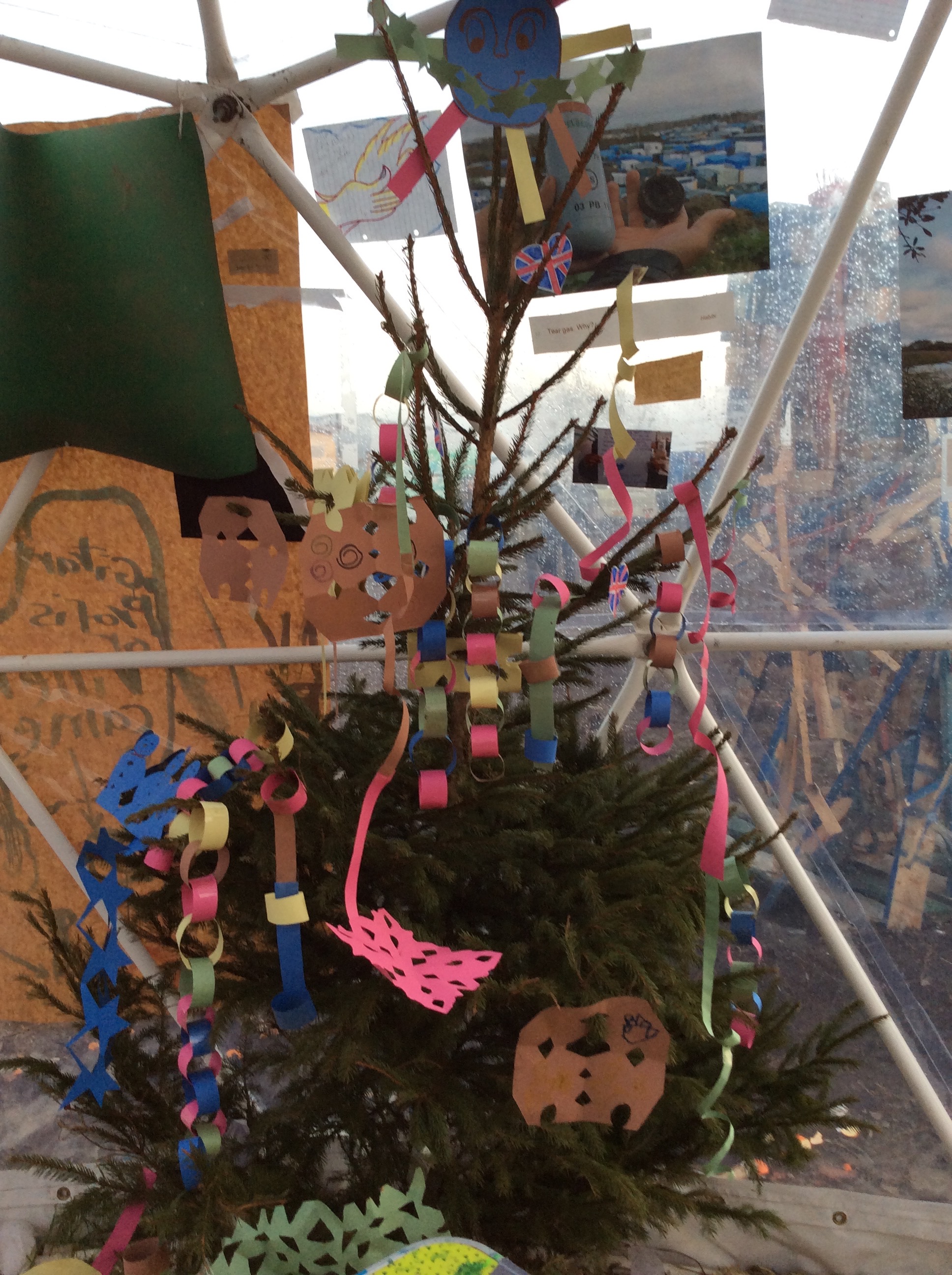