JUNGLE STORIES from gillianzinser on Vimeo.

'The Jungle' is the infamous nickname given to the transient refugee settlement in Calais, France. This makeshift slum-labyrinth is one of the biggest migrant camps in Europe and has been 'home' to an estimated 6,000 people from all over the Middle East and Northern Africa who have fled their war-torn countries and hope to make it to the UK and apply for asylum there. Although French authorities began the demolition of the camp back in March, an estimated 4,946 refugees are still living there.

Bored and fed up with the consumer culture that's come to surround the holiday season, I decided to spend last Christmas giving in a different way and went to volunteer in The Jungle with an organization called Help Refugees UK. I went to Calais because I wanted to understand the situation with my own eyes. I went to listen and to learn. In the face of so many unwilling politicians and impotent systems I had to do something - even if that was as simple as showing up. Making eye contact. Looking these people in their eyes and reminding them that they're not invisible or forgotten. That they're not alone in their struggle. That their lives matter. All lives matter.

The atrocious conditions were heartbreaking to bear witness to. Below is a photo essay that I hope will better share what I experienced than my words could. But what I'm most interested in sharing with others are the refugees' experiences in their own words. I made this short film to bear witness to the struggles, hopes, opinions and dreams of four different migrants I became close with in the camp. In order to protect their identities from ISIS and other extremist groups in their countries, they asked that I only film their eyes. These voices offer a different perspective from what we see on mainstream media that I hope will help to challenge the ignorance, prejudice and racism surrounding the global refugee crisis. Most people will never get the chance to sit and talk with someone in these circumstances and be humbled by just how relatable their wants and needs in life are. I hope to help humanize this community of refugees by sharing these profoundly articulate and heartfelt voices.

It's pretty easy to live with the idea that its impossible for one person to make a difference, especially in a crisis of such magnitude. But I left Calais reminded that collectively, our individual choices, voices, and actions really CAN and DO make a difference. One by one. The only reason thousands of people are not starving and freezing to death only two hours from both Paris and London is because of ordinary people who won't stand by and let others suffer. I hope my lens might persuade you to reconsider who a refugee is, what their situation is, and how you as an individual really CAN help. It's not out of your reach.

PHOTOS FROM THE JUNGLE 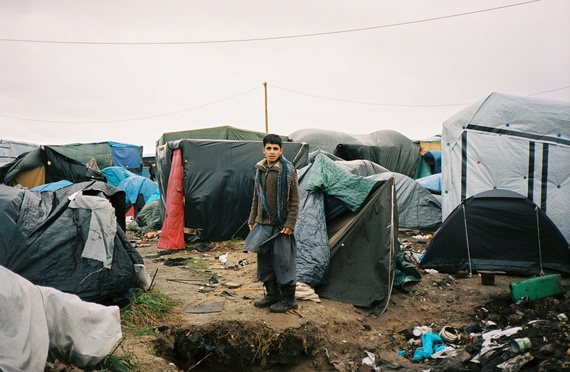 You understand why The Jungle got its nickname as soon as you step foot in the camp. It's not a place for human life. 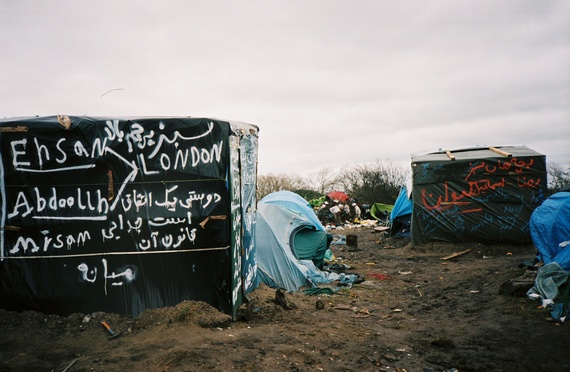 A pop-up third world shantytown less than two hours from two of the wealthiest European capitals, Paris and London. 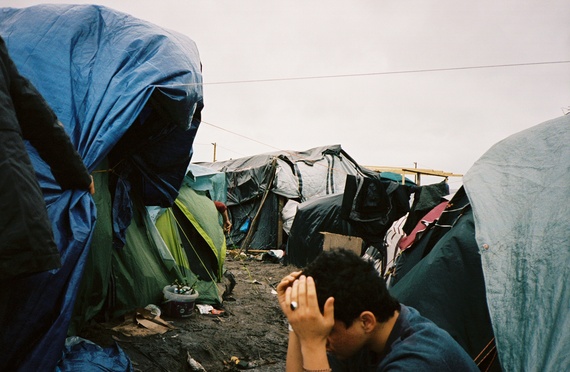 Tucked right off the side of a busy highway, these muddy grounds were once the local garbage dump. Most people are living in flimsy, uninsulated tents or makeshift shanties completely inadequate for winter conditions. 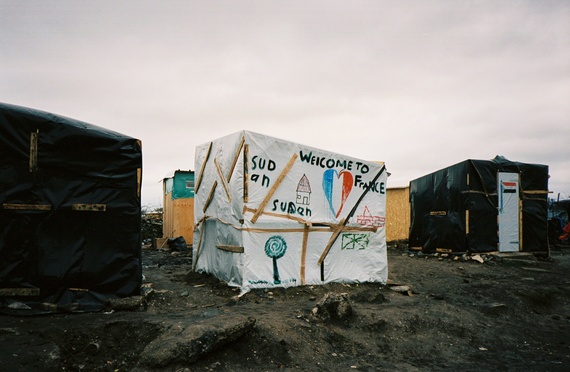 The camp is loosely divided among ethnic lines. The Sudanese, Eritreans, Syrians, Afghanis, Pakistanis, Kurds, Iraqis and Iranians all have their own sections of the camp. 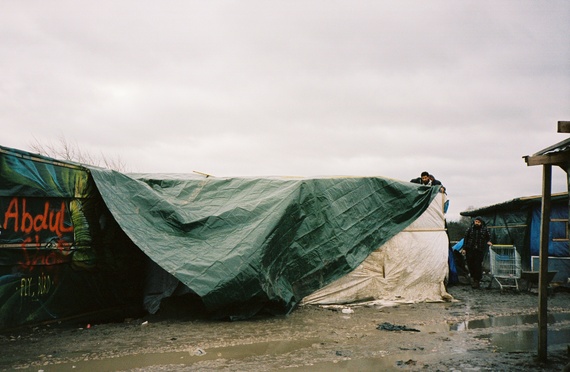 This is one of the many refugee run restaurants in the camp. Everyone kept asking us for plastic tarps to cover their tents or structures with to try and keep out the torrential winter rains. 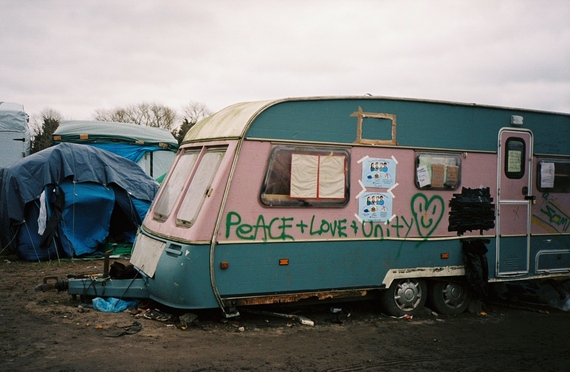 The Pink Caravan is where a volunteer from Help Refugees sleeps every night in order to give people who arrive to the camp in the middle of a night a tent and some blankets. 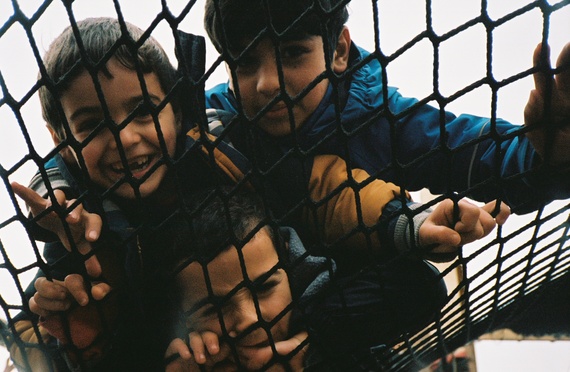 Some children are lucky enough to still have their parents, while others were forced to make the perilous journey across Europe alone. There are an estimated 514 children living in the camp, 294 of whom are unaccompanied minors. The average age of the minors in camp is 14 years old. The youngest unaccompanied child is 8 years old. 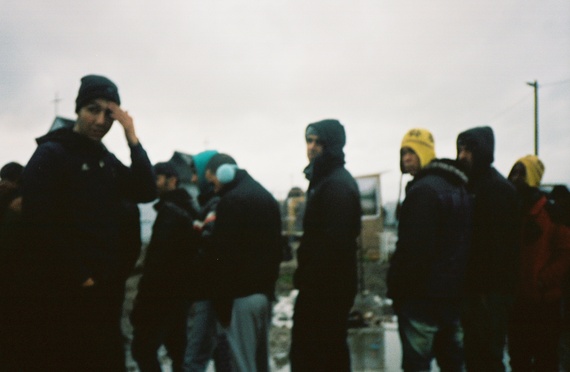 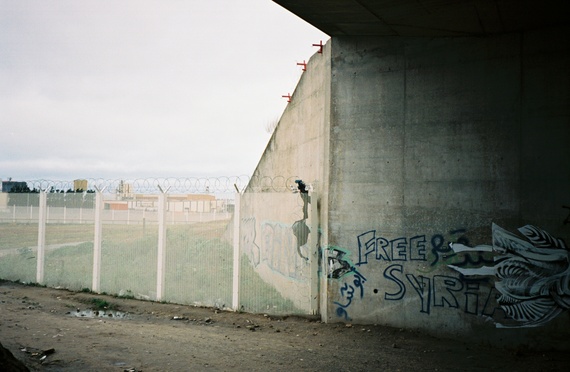 This is the literal divide between worlds. The entrance to The Jungle begins on the right, and the millions of dollars the British government spent on fencing to keep migrants from making it onto the roads (where they try and hide in the backs of trucks heading to England) begins on the left. 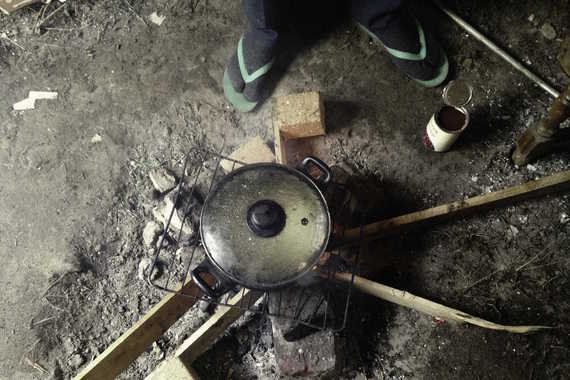 A Sudanese man cooks a meal. These flip flops were his only pair of shoes in the dead of winter until we gave him a new pair of winter boots. 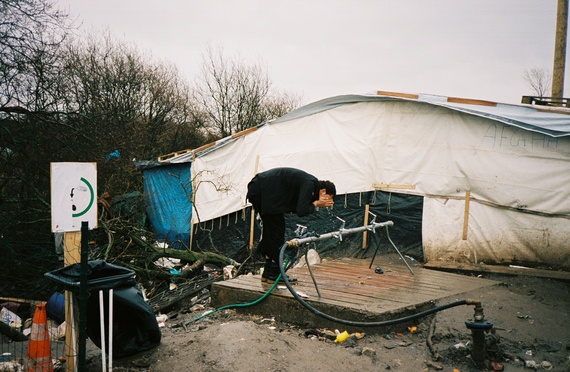 This is one of 7 water points in the whole camp. There are a few showers but you have to pay to use them and often the wait can take up to 6 hours so most people have to use freezing cold water when they want to bathe and have no privacy. 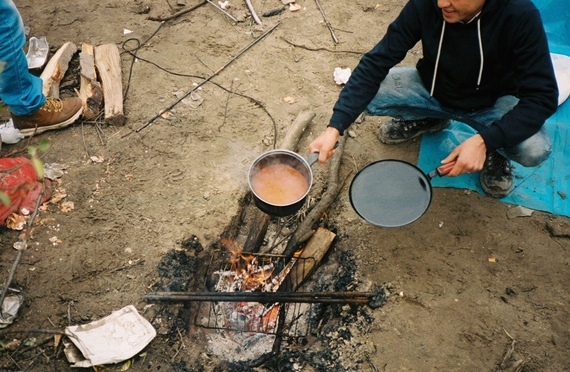 A man from Afghanistan cooks a meal. One of the most pressing needs in The Jungle is food. There is one volunteer-run kitchen and a few refugee-run restaurants for those who have money, but the majority of the people there go hungry every single day. 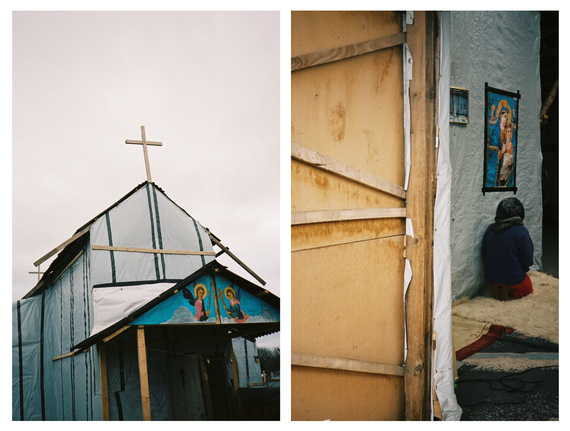 A woman saying prayer inside the Eritrean and Ethiopian Othordox church. 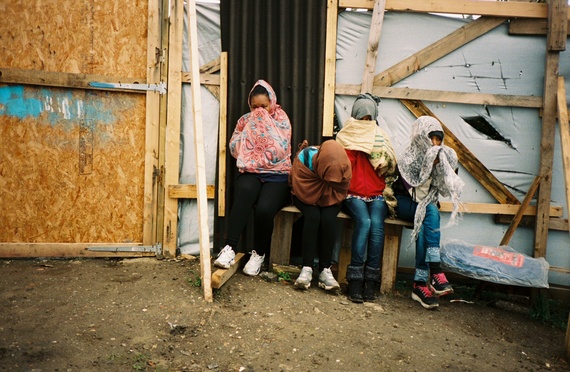 These women had just arrived from Eritrea in the middle of the night before and only had these clothes on their back. It was in the middle of winter and because of the distribution scheduling, warm jackets weren't goign to be available for another few days. While the distribution system is essential to keeping the camp in some form of order, I found that one of the best things I was able to do as a volunteer with a car was to talk to individuals, find out their exact needs, and then run back to the warehouse to get them so that in situations like this people didn't have to go cold unnecessarily. 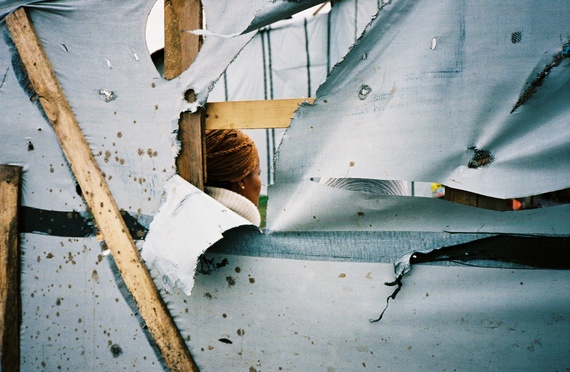 The winds in this part of northern France are extremely cold and so strong that they can rip holes right through tarp. 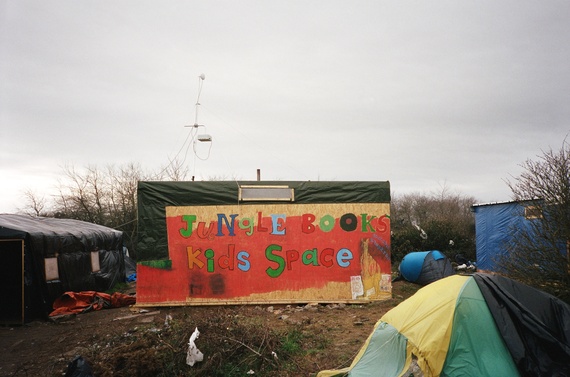 Besides stocking around 200 books, the Jungle Book Library also supports a school that offers classes to those in the camp. 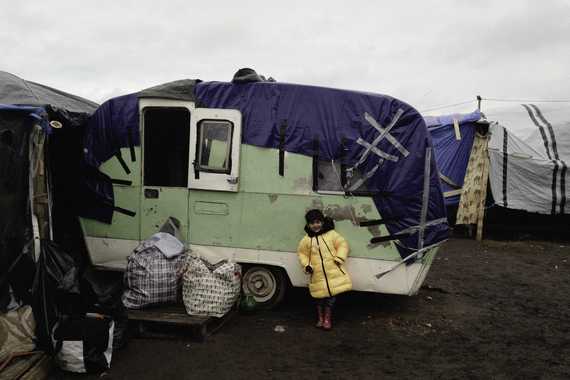 Shadi, a 5 year old girl from Iraq, shows us her home where she and her family of six all sleep. 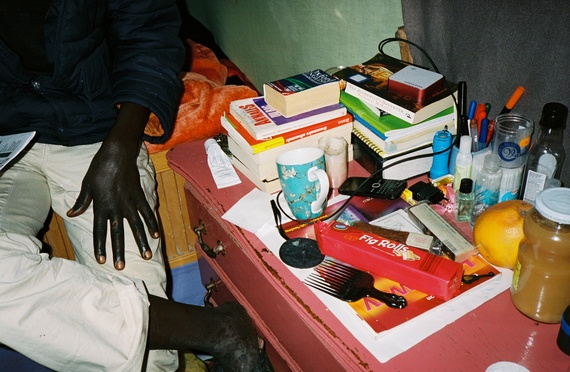 Achmed, a 24 year old refugee from Sudan, shows us his book collection inside his tent. 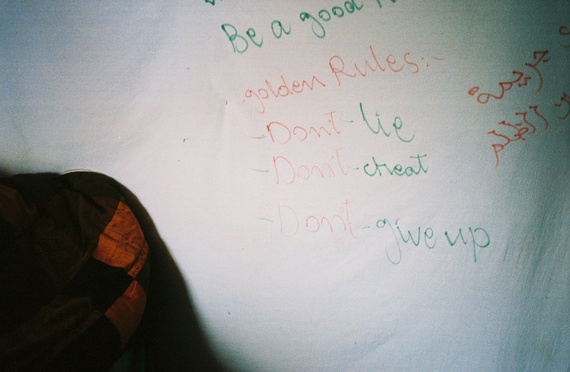 He said he writes little reminders and notes on his walls to help keep his spirit up. 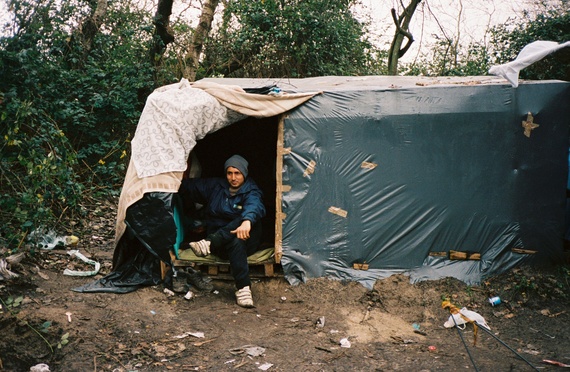 A Pakistani man sitting in the entrance of his shelter 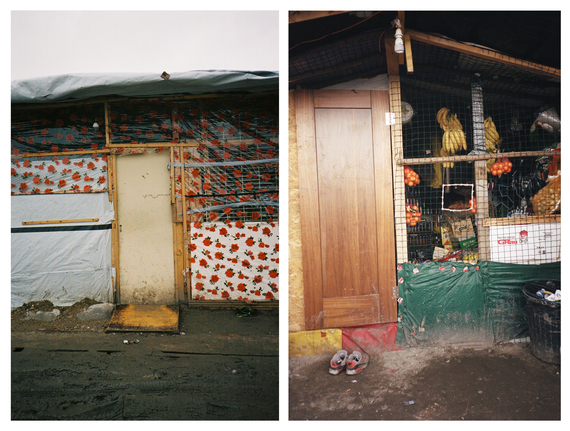 As the camp grows it has also developed a variety of businesses. This is one of many small shops inside The Jungle selling cigarettes, headphones, batteries, drinks and some small things to eat. 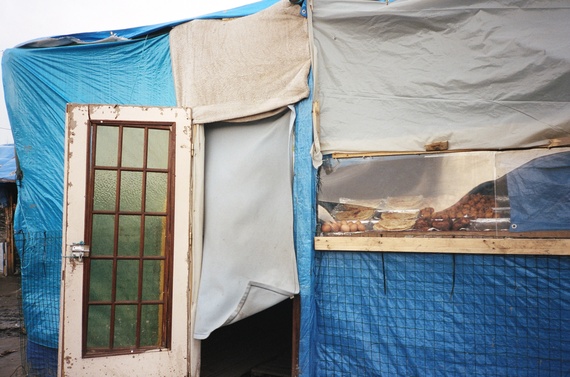 Some restaurants in The Jungle like this Afghani one provide a place to sleep for newcomers or those who find themselves without a tent or shelter for the night. 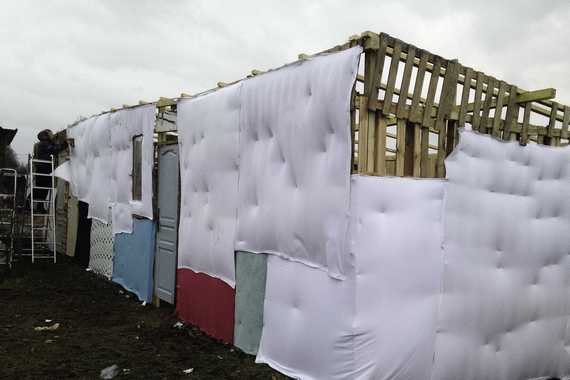 A volunteer from Children Of Calais helping insulate one of the new pop-up schools they're building for the refugee children. 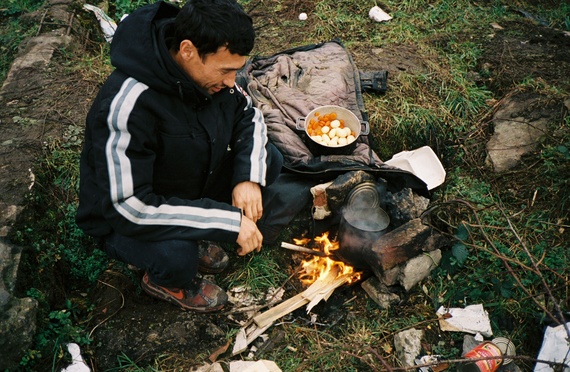 An Iranian father cooks dinner for his family. 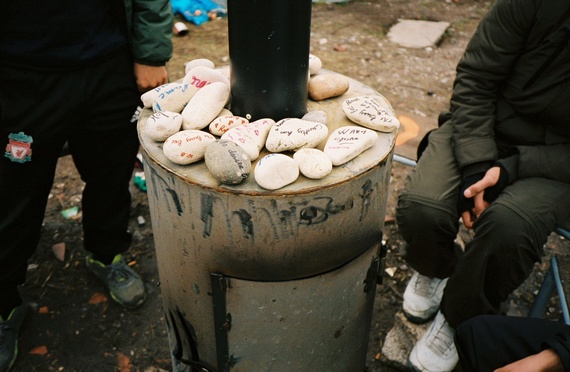 Kurdish men sit around a wood-burning stove heating up stones that they then carry in their pockets to keep warm. 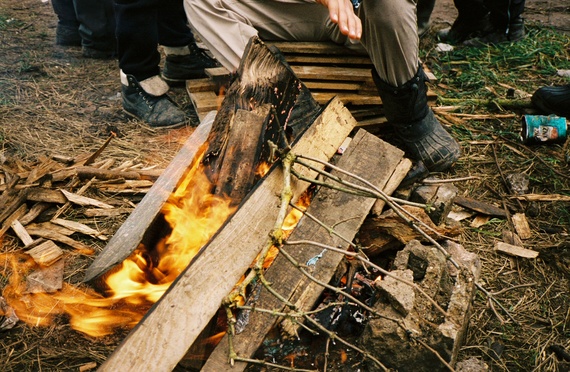 A man lights a damp pile of wood to keep warm. 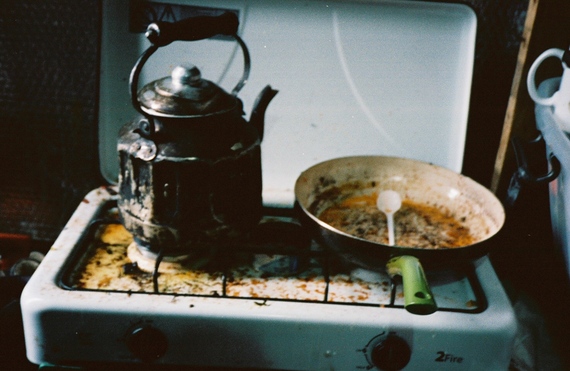 Having a single burner propane stove is considered a huge luxury in the camp. 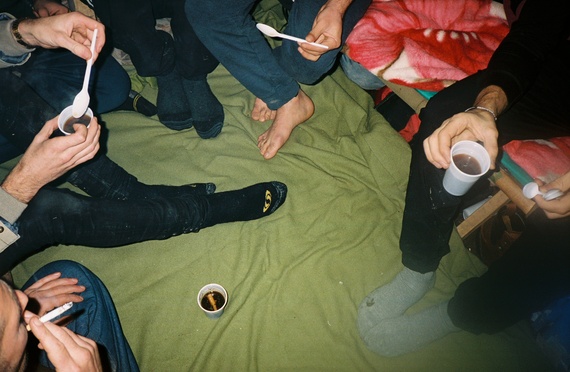 A group of Kurdish friends invite us in for tea and cigarettes. 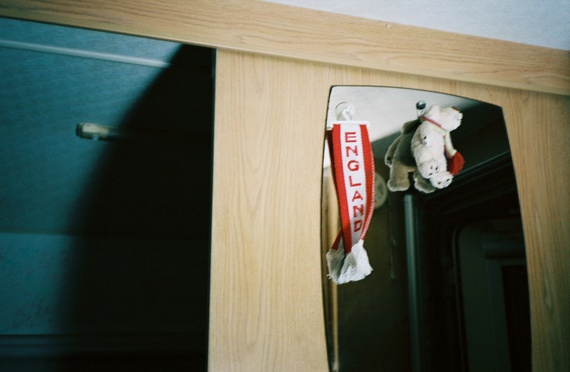 An England flag hangs inside a Sudanese man's trailer. 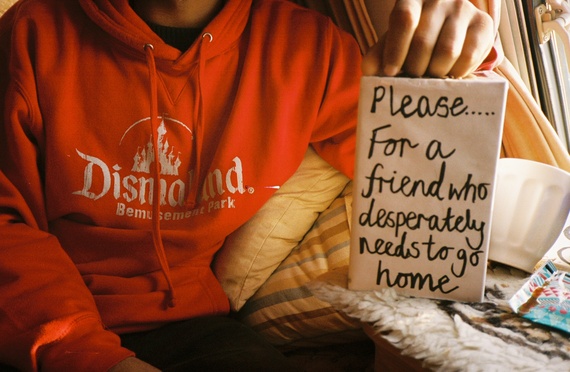 Racist threats and violent attacks by both local police as well as fascist and far-right extremist groups is a regular part of reality faced by the migrants in The Jungle. After his friend was tear-gassed by a neo-nazi group the night before, this 22 year old Pakistani named Amin was going around trying to raise money to help his friend make his way back to his home. Despite the war-zones these people are running away from, some still decide to embark on another perilous journey all the way back to where they started because of the scarce hope of making it to the UK on top of the horrible living conditions in The Jungle.