"Why are we here?" I asked Michael as the Jeep hydroplaned again. We were in Costa Rica, although Michael (aka Michael Solis, an international development worker) was based in Nicaragua at Trócaire, an Irish organization that has assisted nearly 3 million people in need. In between my head cold and the sheets of rain that Michael drove us through that night on our way to the small town of Upala, my ten days spent shadowing him as he met with partner organizations were a whirlwind of humidity-glimmers, community meetings, round faces and warm afternoons, mixed with philosophizing and bearing witness to powerful stories of pain. Outside the jeep it was dark and wet, but we knew the thick greenery to be there. The torrential downpour reminded Michael of a time when he saw a flood swallow a car. He knew the people who had been inside were drowning, just as he knew that he was powerless to help. 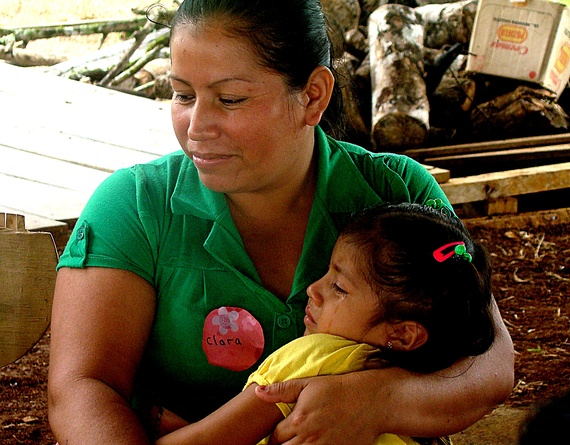 One of Trócaire's beneficiaries and child in Costa Rica

Michael, whom I met our first year out of college through the Henry Luce Scholars Program, is nothing if not of a mind to help, and nothing if not brave. Working with the disenfranchised while navigating the waters of identifying as queer in a Latin American country is not for the faint of heart. But after our year spent working for South Korea's Human Rights Commission and the Mongolian Writers Union, respectively, Michael and I each repeatedly found ourselves in what is problematically called "the developing world". Michael, after his subsequent year working on another fellowship in Chile and another studying human rights law as a Mitchell Scholar in Galway, ditched Columbia Law School and opened his life up to uncertainty. He landed well, and has been working in Latin America ever since. (In his oodles of spare time he got a yoga instruction certificate in India and penned both a fantasy sci-fi series and a memoir about being the gay son of a professional wrestler.) Michael took a courageous step out of the stream of certainty when he left the cocoon of law school, and that uncertainty is always there for us as development workers, as Americans who claim to know what is to help a foreign population: as we rode together in jeeps and buses to Costa Rica from Managua and back again, we wondered to each other. What is the end goal of development work? And what were we there for?

"The pinnacle of our own culture seems at times to purport itself to be, oh, I don't know, the Kardashians," I mused aloud. We were headed to a school in San Jose where the schoolchildren were getting mugged so often, and teachers were so scarce, that classes were shortened and held on the weekends to remain within daylight hours. "Our own home culture has a lot of arrows pointing that way, like reality TV," I continued. "What if we keep following what we encourage -- freedom of expression and the like -- and the end product is person as product?"

"The epitome of American consumer culture," Michael responded as the jeep hit a bump. "Is that ultimately what we're encouraging?"

I recalled a Britney Spears sticker on a boombox in Ecuador, where I worked with a family planning clinic. There was also the time when I returned from working with a rural health project in the Amazon to the high mountain city of La Paz during one of Bolivia's first Gay Pride parades, and heard Selena Gomez blaring from a big feathered van after which there flooded in the cobblestone street at least fifty bopping teenagers in pink t-shirts. I wondered how much Selena Gomez the person knew of "developing" countries and if she thought about how her voice reverberated in the streets there. I wondered what the tenuous connection was between Britney Spears the breathing human and the faded sticker bearing her image thousands of miles away. Is there a frame other than globalization, and a language other than its lexicon, to describe the sticker's presence there -- my own presence there? 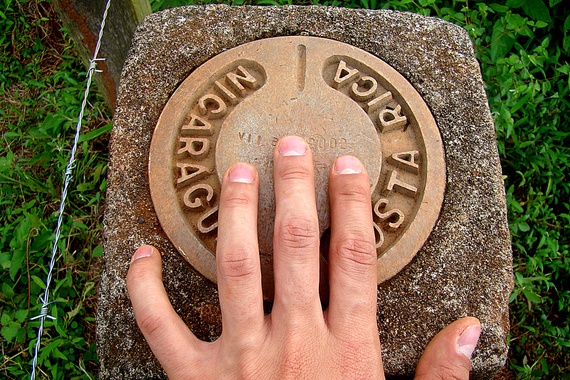 Michael and I are part of a generation of development-interested people whose work in the field is the product of a particular worldview, one that admires some other than the usual suspects. It's work with women who were beaten for years, and who now receive shelter and skill-building from organizations like Cenderos in Costa Rica, that causes people like Michael and me to champion public figures such as Anne-Marie Slaughter. Dr. Slaughter broke The Atlantic's readership records with her public espousal of a sociological shift toward valuing men as emotionally literate caregivers, the sometime absence of which value system in Latin America provides the tragic basis for much of Michael's work there. It's supporting the work of hip, teenage men through Cenderos who commit to an understanding of violence as a product of culture, and a conception of that culture as changeable, that brings Ronan Farrow into our conversations. Mr. Farrow worked for years under Hillary Clinton, founding and directing the first-ever Global Youth Issues Task Force at the State Department, and now he's launching a show on MSNBC with the aim of engaging youth with pressing causes to make an impact on many of the same issues Michael and I work with on the ground.

So with our heroes and our convictions, what were we doing there, presuming to help other humans with less income, less options, less mobility than we had? It's a rhetorical question insofar as the immediate challenges at hand are only growing; we remain mired in a global phase characterized by the world's 85 richest people being more wealthy than the poorest 3 billion. What we'll do when every child is fed and educated, when every girl has a degree if she wants one, when every government isn't corrupt -- it's an abstraction. As to what our role was, we sort of knew the answer to our question. Last year I wrote a book about my experience founding The Survival Girls, a self-sustaining theater group with young women in a Nairobi slum who are refugees from eastern Congo.Victims of severe gender-based violence, the Survival Girls taught me that when a traumatized person is able to tell his or her story and be heard in the act, something fundamental and miraculous shifts, often helping to pave a way out of trauma and into functionality again. I believe development workers -- whose work, because it takes place in economically "underdeveloped" societies, inherently involves interaction with often traumatized and almost always disenfranchised people -- can create a certain kind of space for that renewal and movement forward. The profits from my book go to the Survival Girls' education because of what their movement forward makes possible: the Survival Girls can heal their own communities much more efficiently and deeply than even the most well-meaning and seasoned development worker could. Development workers are, simply put, facilitators. 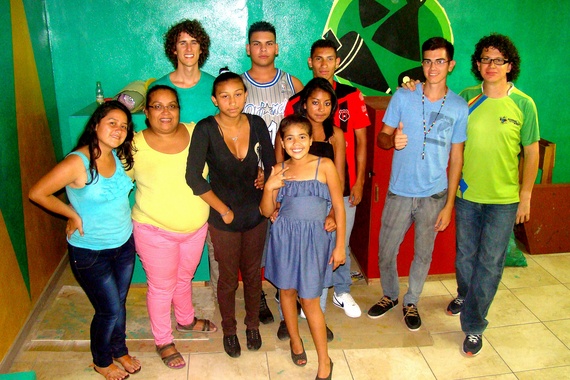 Michael (back left) and friends from Trócaire partner organizations

When I awoke late and drenched in sweat in the afternoon from my head-cold-infused nap in the Jeep outside a community compound in rural Costa Rica on our last day there, I squinted past the chain link fence to the outdoor meeting center. I could make out through the glimmers of heat several swan-like arms, sailing up and down in synchrony. Sometimes the role of facilitator takes the form of a tall, tan, green-eyed, curly-haired, queer man leading a circle of women in a tiny Central American outpost through a succession of yoga movements to end out their afternoon meeting.