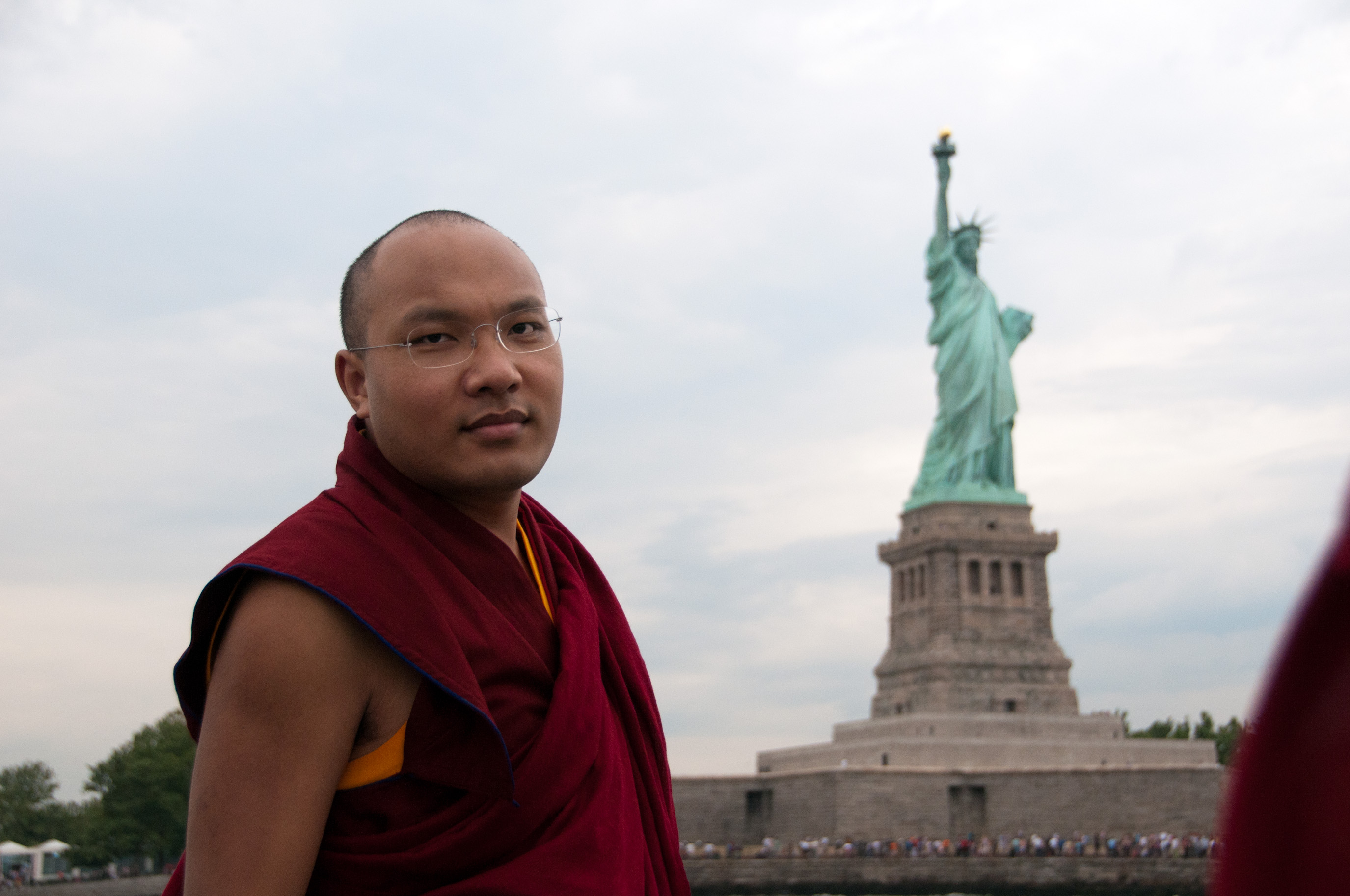 At first look, His Holiness The Seventeenth Gyalwang Karmapa is intimidating. Well built, self possessed, and with a keen glance, he walks more like a middle weight boxer than one of the most venerated religious figures in Tibetan Buddhism. As the twenty-six year old moves around the room, his sly and playful side flashes occasionally as he teases his capable translator and raises an eyebrow with interest at an hors d'oeuvre nervously presented to him. Later, as he begins to share his perspective on individual spirituality and global concerns, a fully formed figure emerges - that of a powerful young man who is rapidly becoming a world religious leader.

HH the Gyalwang Karmapa is the 17th incarnated head of the Karma Kagyu school of Tibetan Buddhism, that began slightly over 900 years ago. The Karma Kagyu school is one of four in Tibet, represents approximately 20% of Tibetan Buddhists, and has hundreds of monasteries and centers all over the world. All four schools of Tibetan Buddhism recognize the leadership of HH the Dalai Lama who the Karmapa recently joined in Washington D.C. for the Kalachakra gathering for World Peace. However he bristles at any talk of him being the next Dalai Lama: "I will not be the next Dalai Lama, That Is Impossible."

While it is impossible for the Karmapa to become the next Dalai Lama for the obvious reason of lineage, he has begun to command the spiritual resonance and political heft associated with his elder Tibetan spiritual leader. In the years to come, the Karmapa may play a crucial role in the central concern of Tibet - China. The Chinese government recognizes the Karmapa's legitimacy which may make him a powerful negotiating partner in that ongoing struggle.

The Karmapa frames the issue as a question of human rights:

His Holiness the Karmapa is quick to point out: "I am not anti-Chinese. I am a spiritual teacher and am working for the welfare of all sentient beings. I am not anti anything, including China. But I will advocate for the truth and I want the truth to be known."

Care for all sentient beings extends beyond the issues of the Tibetan homeland for the Karmapa. He has spoken about the need for equalizing the status between women and men in Tibet and within Buddhism, and is engaged in the conversation between science and Buddhist thought. But perhaps nothing has defined him so clearly as his interest in the environment. At a gathering of over 2,000 Tibetans in New York he surprised his audience by veering into a discussion around environmental concerns, a consistent topic of conversation for him which has earned him the moniker by some of 'The Green Buddha.' In 2009, the Gyalwang Karmapa convened two conferences on environmental protection for Kagyu monasteries and nunneries. The outcome of these conferences was a commitment from over 40 monasteries to put environmental protection into action by planting trees, protecting wild life, conserving water, organizing waste management, and adopting renewable energy sources.

When asked about what it is about Buddhist teaching that inspires his environmental activism, the Karmapa says that is an easy question:

"In Buddhism we aspire to benefit all sentient beings. If we have any opportunity to give happiness or well being then we take it with delight and enthusiasm. The environment is the source of life for not only human beings, but all living creatures in the world. Therefor if we respect and protect the environment we bring benefit to countless sentient beings. This is what in Buddhism we call practicing the perfection of skillful means. While we might be able practice generosity by giving a donation to a person in need, that is a very finite act of altruism. But if we protect areas such as the snow mountains of the Himalayas and the rivers that flow from them then we will be nourishing a source of life and vital support for countless fish, and humans and other beings. Caring for the environment is a wonderful opportunity for Buddhists to care for sentient beings - one simple action can benefit so many and is the essence of practicing the Mahayana quality of great compassion."

The Karmapa's role as a spiritual teacher is of special interest to the growing number of people in the West who are seeking Buddhist wisdom and Dharma, or teaching. A major question for many of these Buddhist practitioners is how to authentically understand and practice a tradition in the West that has such deep roots in the Tibetan plateau. The Karmapa does not gloss over the challenge:

"The Buddha's teaching were allowed to take root in Tibet in an isolated context, undisturbed, and almost in secret for over 1,000 years. Because they were not distracted by external busyness, the Tibetans were able to deeply immerse themselves in the teachings and develop very strong habits of the practice. The broad and open spaces of Tibet offered an environment where people could rely on the spiritual methods in a strong way. The West is different. In the distractions and crowds of the cities there is not as much time to practice spiritual traditions in same way, and so maybe there is a challenge to allowing the teachings of Buddhism to take root here in a deep way."

Following up on this discouraging remark, The Karmapa continued:

"On the other hand, maybe the busyness that we all contend with can be employed in a skillful way to help us lead more spiritual lives. In Buddhism we speak of the symbolic teacher of appearances, and that means that the phenomenon that we witness in our day to day lives can actually teach us deep lessons about the way things are and the inter-connectedness of all things. So if Tibetan Buddhism was the tradition that emphasized the quality of faith and derived great benefit spiritually cultivating that quality of faith, then perhaps Buddhism in the modern world and the western world will be a Buddhism that derives benefit from the quality of discernment and intelligence. So perhaps we will benefit more from relying less on faith and relying more on our intelligence. If we do that then I think that there is hope that the spiritual teachings of Buddhism can take root deeply in the modern world and in the West."