I am no stranger to fear and war. Since I was 15, I have lived through a dictatorship, a revolution, and now, a country plagued with internal fragmentation and clashes between rival armed factions. 48 hours or more without electricity, restricted movement, and assassinations are a daily reality in Libya, which is consistently ranked amongst the world's "most dangerous" countries.

To make things a little more contentious, I am the founder of The Voice of Libyan Women (VLW), the most prominent women's rights organization in the nation, with projects implemented throughout the MENA (Middle East North Africa) region. VLW pushes for the increased participation of women in conflict mediation and peace processes by shifting the paradigm around the role of women in society at both the grassroots and policy levels. We use religious discourse (a radical idea, as it is popularly seen by many to perpetuate the problem) to instead positively reinforce women's rights, roles and participation.

Despite their relative lack of formal political and economic authority, women are vital to conflict resolution and sustainable peace building. Economically, they are predicted to provide the biggest boost to the global economy in our history - an expansion more powerful than the combined growth of China and India. In fact, the International Monetary Fund estimates that a greater inclusion of women could drive up global GDP growth 27% per person. Why is this significant? Because the vast majority of this growth will be reinvested into their communities, families, and, ultimately, into the human capital that will drive tomorrow's growth. It is with this capital that we will create the very habitats which will drive violent extremism into extinction.

And we cannot overlook that 64% of peace negotiations are more sustainable with the inclusion of civil society, made up predominately of women. Their community credibility and networks make them crucial to legitimate dialogue, cooperation and cohesion - necessary ingredients for sustainable peace. It is through the participation of women that we strengthen the building blocks of society from the top down and the bottom up. 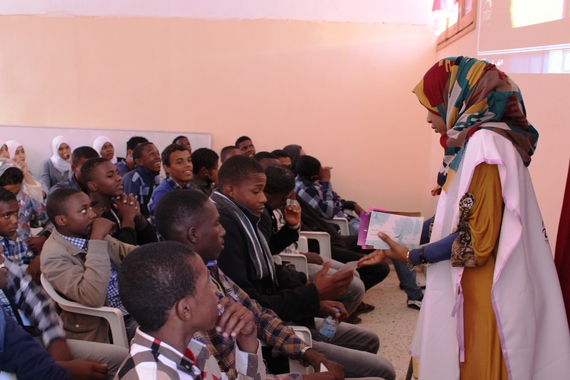 Woman Peace-builders: A member of The Voice of Libyan Women's Noor network in Obari, southern Libya conducting a security and violence workshop with high school students.

And yet the roles of women and the benefit they bring are continually disregarded in conflict situations. Despite the international community's assumed commitments to the inclusion of women in negotiations and peace building, women account for only 4% of participants in peace talks. Frequently relegated to the sidelines as observers in a situation where they have the most to lose.

Rather than being encouraged and seen as partners in leading the region into a future of peace, prosperity, and economic sustainability, women are still being marginalized due to a lack of political will, communication, social awareness and a dependence on international militarization, rather than community development, to combat extremism.

Hyper-militarization and increased intelligence are the very basis of "Countering Violent Extremism" or "CVE". Many people don't identify with the term, however it is how violent extremism has been internationally combated for years. A realm of policy and practice, "CVE" is heavily dependent on security and defense and, unfortunately, does not take into consideration the realities on the ground and the fundamental causes of extremism.

It is time we redefine "Countering Violent Extremism". I believe it should mean something else entirely: It should mean community development, education, and a heightened focus on dialogue and partnership. It should mean the full and active incl of women, at all levels.

Potential extremists exist everywhere - the key difference however is that in the developed world there are greater political and military restrictions. This is drastically different than the situation in the Middle East. Here, extremism significantly benefits from the disintegration of political and security structures, leading to a crippled economy and an unshakeable sense of hopelessness. In global governments, it may take months or years to discuss policy and implementation, whereas in many homes these conversations cannot wait days as basic needs - baby food, water, shelter - are not met. The urgency which you will not feel at the UN or the EU is palpable in the streets, as armed factions continue to acquire control of roads, ports, hospitals and shops, and citizens find their access to crucial community needs and supplies dependent on their ability to cooperate with them.

It is something we learn in elementary school - that a solution can only be found once the problem has been identified and admitted. We tend to forget this, however, as we push for "quick fixes" - they may curb extremism for a day, or a week, but, ultimately, military strikes and offensive tactics will only drive for greater instability in the region. The rise of ISIS in Iraq and Afghanistan's resurgence of Al Qaeda are enough evidence that this approach has not been successful.

So maybe it is time we ask what does make sense?

Rather than communicating to the region solely through destructive military strikes, leaving what little structure is left in these communities in shambles and further validating extremist beliefs and convictions, isn't it time we work with members of the community to elevate the standards of living? We have as much opportunity and resources - and a much greater need - to create the potential for stability through dialogue and cooperation, rather than armed combat.

Our world is on edge, there is no denying that. New security threats appear daily and traditionally accepted methods of international intervention are no longer cutting it. There is no greater strategy in combating violence and mediating conflict than the full inclusive participation of all facets of society, especially those who are disenfranchised. Our vision must be to prioritize dialogue, education and cooperation in the advancement of human rights and democracy. Only then will we have created peaceful, prosperous societies and have been truly successful in "countering violent extremism".