But when I sit back, sip my scotch and scan the newswires for sundry effluvia indicative of our culture's joyful hellbound deathspin, the realization soon dawns that I can think of few gigs more nightmare-inducingly, soul-deadeningly horrible than being an executive for garbage food megacorp.

That is to say, a VP for McDonald's, Taco Bell, Burger King or their ilk, someone who sits around all day trying to discover new ways to manipulate, coerce, poison, and otherwise flagrantly kill millions of humans worldwide by convincing them to eat mass-produced, industrial feedlot, chemical-blasted garbage you should not feed to your dog unless you totally hate him and want him to get heart disease and die.

Hell, even the oil titans right now raping Canada can claim to be supplying a commodity that runs the engines of the world. Even Wall Street ogres can claim to be partaking of a time-honored tradition of gutting the U.S. Treasury at the expense of the ignorant masses. But head of marketing for, say, Kentucky Fried Chicken? Oh, you poor soul. Hell hath a special room for you.

Who are you, really, Mr. KFC executive? Who are you who just gave your approval to a rather shocking new KFC food item, who said "Oh holy hell, yes! Look at these great test-marketing numbers! Fuck it, let's go against every shred of human decency, common sense, and even the First Lady's humble plea to get us to please quit making the country so stupidly obese and sick, and sell a truly disgusting creation."

Do you know what I'm talking about yet? Have you seen it? Apparently, for many months, people who run the snarky junk food blogs on the Interwebs heard rumors that KFC was testing this item, and thought it might be a joke, a viral gimmick. Or if not that, then something that certainly would never make it to market, given how it looks like some sort of frat-boy prank, like the drones at KFC's test kitchens got completely hammered one night and had a bet as to who could come up with the most repulsive menu item imaginable.
Advertisement 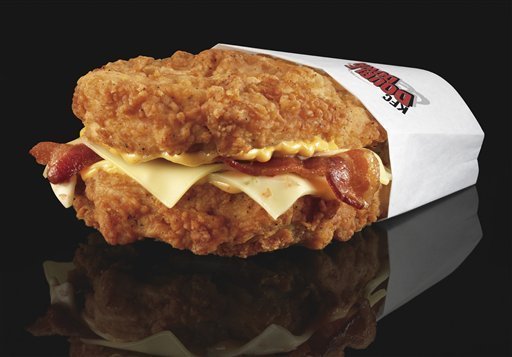 Special deal! Eat two of these nausea bombs in a row and receive a coupon for a free
surgical stent for your coronary artery, and 10% off an XXL casket at CoffinTown! Or eat
three and die almost instantly and save us the postage. While supplies last!

Behold, the
KFC Double Down sandwich
. It is, if you really want to know, two slabs of fried chicken intersliced with two pieces of bacon, two slabs of cheese, and the Colonel's "special sauce." It comes in the form of a sandwich, with the fried chicken where the bread used to be. It's sort of hilarious. It's sort of perfect. And then it'll probably
make you vomit
....

Did you notice? How in one pseudo-food item, you are consuming not one, not two, but the mutated, chemically injected flesh/byproducts of fully three different distended, liquefied, industrially tortured creatures? Feel the love, pitiable animal kingdom.

You got your chicken-like creature, your pig-like creature, your dairy cow-like creature, all wrapped in a $5 fistful of nausea, ready to strangle your heart and benumb your brain. God knows what's in the "special sauce." Maybe some sort of fish byproduct, just to round it all out. It's like a wild kingdom in your mouth! It's like a toxic zoo in your colon! It's like a suicide note from what's left of your brain! "If you eat this, you are a complete and total idiot, and we're through. Signed, You."

Let us now add a shred of wary perspective. For well do I know this horrible crapbucket of chyme joins a very long list of fast-food nightmares you should never put anywhere near your mouth, unless you deeply hate yourself and don't give a damn anymore, and you want to die fat and stupid and smelling like that rotting thing you found in your rain gutter.

What's more, some fast food companies are trying, at least a little, to respond to the call for slightly healthier foods, adding salads and fruit and grilled chicken breasts to their menus, even though every single one of those items is just as jammed with chemicals, preservatives, synthetic flavorings and high-fructose corn syrup as the rest, and all the "healthy" meat products are still raised on the most execrable, environmentally rapacious industrial feedlots imaginable. But hey, it's something, right?

Further, some argue that it's a bit disingenuous to blame the junk food purveyors for all the obesity, cancer, impotence, bad skin and colonic pain in the land. After all, the undereducated masses love to eat this garbage, right? KFC test-marketed this Double Down death bomb for months, to (presumably) great effect.

Of course, it's sort of a foregone conclusion, a rigged game. This vile meatwich is crammed like a grenade with sodium, sugar, fat and chemicals. Ergo, the testers, presumably people with taste buds devastated by years of cramming similar compost into their guts, thought it was pure nirvana. And then their colons exploded.

Had KFC actually tested it on people who eat real food every day, folk who haven't touched fast food in years, whose systems are strong and fully recovered and in whose bodies blood flows unobstructed, had KFC dared any genuinely healthy human to take a bite, you can bet they would have heard, and smelled, a slightly different reaction.

Maybe it's all a silly, futile argument, a fool's game to point up the obvious evil of such products. These items are legion. They just keep right on coming. What's more, it's just capitalism at work. It's about giving the people what they want, right?

And if they don't really want it -- if, deep down, most humans sense this garbage is hugely unhealthy, that it's a form of slow poison and there are far better and wiser options out there -- well, you do what companies like KFC, Coca-Cola, Kraft, McDonald's and all the rest have done since the dawn of the free market.

You convince the less educated and the gullible that they are wrong, that this crap is actually a good value for your family, nutritious and safe to feed to children, even as you manufacture all the flavors, smells and meat-like textures in a giant lab and sell truckloads of the crap to the poorer classes, until they get fat and sick and die. Meanwhile, you employ cute cartoon characters and bright, funny mascots to lure in the next generation, to keep the cycle going.

Do I have that about right, Mr. KFC exec? Did I miss anything? Can you hear me down there, what with all the flames and the screaming?

This piece was originally published at the San Francisco Chronicle's SFGate, here.

Mark Morford is the author of The Daring Spectacle: Adventures in Deviant Journalism, a mega-collection of his finest work for the SF Chronicle and SFGate. Get it at daringspectacle.com or Amazon. He recently wrote about the Texas Board of Education, sex rehab, and what it's like being part of the evil liberal conspiracy. His website is markmorford.com. Join him on Facebook, or email him. Not to mention...

KFC&#039;s Double Down: Photos, Videos, Other Menu Items, And More