Mike Coleman didn't believe his eyes. Why would Brian Grazer, Hollywood mogul steeped in critical acclaim from A Beautiful Mind and rolling in dough from Parenthood, Backdraft and Apollo 13, be in the middle of the Brazilian jungle in late 2003?

Then again Coleman's reasons for being there were as unlikely as any -- to corner Mark Schultz, former Olympic gold medal wrestler, in the main event of Jungle Fight -- Brazil's version of the UFC. Coleman wasn't a cut man or a doctor or a fighter, but he was a determined if novice movie producer, which is why he readily agreed to go to Brazil with Schultz when the fighter asked him to work his corner. And why Coleman thought the sight of Grazer was a figment of his imagination.

A few years earlier, in 1999, Coleman and his brother Jared had started MobileMetrics, a company that provided mobile phone-based interactive advertising. The experience of hiring staff, raising money and nurturing a project from idea to fruition left Coleman with the belief that he had what it took to do something he had long dreamed about -- make a movie.

And he knew instinctively what Robert Evans (who as head of Paramount Pictures greenlighted Love Story, The Godfather and Chinatown to name three) learned the hard way -- to get anywhere in life, and particularly Hollywood, you have to have product. Richard Burton had fiery genius, Robert Towne could tell a gripping story, George Lucas saw the potential is light sabers; Raquel Welch had breasts. In his memoir The Kid Stays in the Picture Evans details his efforts to make it as a producer, which were futile until he acquired product in the form of the movie rights to the 1966 crime novel The Detective.

After Coleman wrapped up his work with MobileMetrics in 2002 he set about finding his product. It was several months in to that search when Jared, who had wrestled for Schultz while the latter was a coach at BYU, and was now Schultz's attorney, sent Coleman a draft 50-page Schultz autobiography. Coleman knew he had his product, and set about securing it. In their first meeting Coleman told Schultz he wanted to make a movie that would tell the story of the tragic triangle formed by Mark's charismatic brother Dave, the deranged mega millionaire John du Pont, and Mark, from whose point of view the story would be told. He pitched Schultz a version of the story that left Schultz in tears and he agreed to sign his rights to Coleman, a man who had never made a movie.

It turns out that there is product and then there is product. For a Hollywood outsider, you are better off with Raquel Welch's breasts than you are with the rights to a complicated, dark, if somewhat incredible story. Coleman spent over a year crisscrossing the country, meeting with anyone who had even a remote possibility of helping him move the project along.

I know because I fall into that category, emphasis on "remote," and a mutual friend arranged a meeting. My qualification was that I had some credentials as a wrestler -- an all-America at Princeton in 1985. But since then I had neither wrestled, nor coached, nor even re-watched Vision Quest. And I was not in the movie business -- in fact I wasn't even working at that time -- I had gone back to school to study physics. But I did know someone who knew someone, and ultimately the treatment that Coleman had written made its way to David Benioff, fresh off the success of The 25th Hour.

Benioff was hot, but equally important he is the son of Stephen Friedman, the ex-Cornell wrestler, ex head of Goldman Sachs and long-time wrestling benefactor. Benioff too had wrestled, though wrestling at The Collegiate School in NYC is akin to being on the ski team at Natchez high. Benioff took a pass on the project, and seems to have made peace with that decision, subsequently marrying Amanda Peet and running Game of Thrones for HBO.

Benioff was just one in a long list of dead-ends Coleman had pursued in the 18 months since he met Schultz, so when Schultz was offered the spot on the jungle card Coleman jumped at the opportunity to work the corner, seeing the bout as a lifeline for the film.

When Schultz and Coleman arrived in the jungle clearing, after a Kurtz-esque boat trip up the river from the Amazonian capital of Manaus, Coleman had movies on his mind. In addition to hoping the jungle fight would give a boost to his Schultz project, Coleman had just read a New Yorker profile of Grazer called The Producer and so Coleman "seeing" Grazer in the jungle was akin to Captain Ahab "seeing" Moby Dick beached in Boston Harbor -- most likely a mirage.

On fight night, as the undercard bouts got under way, Coleman did a double take at the sight of six men in golf shirts in the front row -- he immediately recognized them as Brad Grey [head of Paramount Pictures], Jim Wiatt [head of William Morris Agency], Tom Freston [head of MTV], Les Moonves [head of CBS], Graydon Carter [publisher of Vanity Fair] and yes, Brian Grazer. 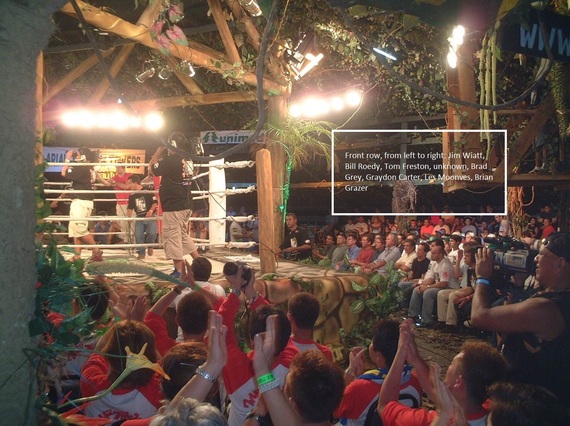 Coleman was stunned, but not so much that he would let this opportunity pass. When Grazer went to the bathroom, Coleman followed him in and gave Grazer the urinal pitch, telling him he had a screenplay he wanted him to read. Grazer was kind (or leery) enough to hear Coleman out and responded "OK, send it to my assistant." Coleman was elated, seeing this chance meeting as karmic proof that his movie was going to be made, and by Brian Grazer no less.

An hour and a half later it was time for Schultz's bout, which he lost in murky circumstances. Afterward Schultz was inconsolable, and had the look of a man realizing that he has just thrown away his life's work, tarnishing his sterling combat record with this embarrassing loss. What did the moguls think of the bout? There is no way to know from their reaction on video -- they aren't there, having left before the main event.

On the boat out of jungle with the forlorn Schultz, Coleman still had hope that his Grazer connection would bear fruit for the two of them. Upon arriving back in the U.S., he hurriedly printed off the screenplay he was working on, and Fedexed it to Grazer's production company, Imagine Entertainment. He never heard from Grazer again.

Two months later, with the movie project still at square one, Coleman enrolled in business school at Columbia, but his dream of making a movie had not died. On the first day of orientation he learned that a classmate had a Hollywood background as a rep for screenwriters. That same day Coleman sought out Tom Heller, gave him the pitch, and a production partnership was born.

The two of them would continue on a decade-long trip that included a successful Hail Mary to Bennett Miller, cameos by Hollywood persona ranging from Ari Emmanuel to Robert DeNiro, and a wife and four kids for Coleman. Their odyssey ends with Foxcatcher finally making it to the screen, and now playing at a theater near you. Through it all, the kid stayed in the picture.