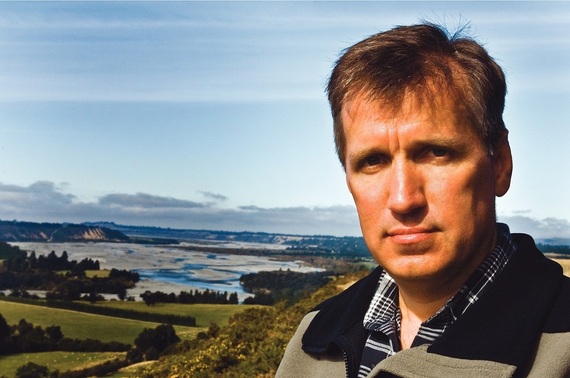 James Rollins is the New York Times bestselling author of the Sigma Force series and other novels. Blending science and history, his action-adventure novels have been praised as "enormously engrossing" (NPR) and "smart, entertaining adventure fiction" (New York Journal of Books). Before pursuing a writing career, Jim obtained a degree in veterinary medicine and established a successful veterinary practice in Sacramento, California.

The Kill Switch involves Tucker Wayne, a former U.S. Army Ranger and member of the Sigma Force, and his fabulous Belgian shepherd, Kane. They must extract a pharmaceutical scientist from Russia, a man who knows the secret behind a biological threat that in the wrong hands, could terrorize the entire world. The mystery goes back to the origins of life on earth, and time is running out for Tucker and Kane to discover the key to this potential threat. The novel treks across Russia, then to South Africa, and finally to the United States.

The Kill Switch involves Tucker Wayne, and his military dog, Kane. Tell us about military dogs and their handlers.

My first exposure to military dogs was when I toured Iraq and Kuwait in 2010. As a veterinarian, I watched some dogs being worked in the field. I talked to the handlers because I was curious about the relationship between man and dog. Was the dog simply treated as a weapon? Or was there a real relationship? The phrase I heard was "It runs down the lead" meaning there's intense communication and real emotion between the dog and handler. I loved the phrase and used it in the novel.

I learned that over time, the handler and dog could read each other without even using hand or verbal signals. One fellow said, "My dog understands me better than my wife." I wanted to capture that relationship, but not in a Disney version of the war dog. I also went to Lackland Air Force Base and watched the dogs in training. I wanted to create a realistic portrayal of these dogs by showing their abilities. Some people who've read the book simply cannot believe dogs can do the things Kane does; but some of the handlers said that if anything, I was too conservative in describing what these dogs are capable of actually achieving.

Parts of the novel were written from the point of view of Kane, the dog, and reminded me of Jack London's White Fang and Call of the Wild. Was Jack London an author you read years earlier?

I love Jack London. In fact, reading his novels inspired me to become a veterinarian. In certain ways, The Kill Switch is sort of an echo of White Fang. I tried to capture that type of storytelling. I wanted my readers to be in the paws of those dogs in a realistic manner. I wrote those scenes in the present tense because that's the way dogs experience the world -- in the moment. Dogs focus on what's going on in front of them. I tried to capture the way a dog's enhanced senses of sight, smell and hearing impact his reality. I also wanted to capture the bond between dog and man.

The novel deals with many things, including the threat of invasive species to our way of life. Talk a bit about that.

I've always wanted to address the issue of invasive species in a novel. It's a huge threat -- I'm thinking specifically of certain bivalve mollusks that have invaded various waters. The government is very concerned about this. This problem could eventually wreak havoc throughout the agricultural systems.

Your medical background as a veterinarian is clear in this novel. The Associated Press said of your books, "The science reads like the best of Michael Crichton." In that context, what inspired you to begin writing fiction?

I always wanted to be a veterinarian -- as early as the third grade, long before I could even spell the word. I loved animals and science. As a kid, I was dragging injured animals and stray dogs home. I also read avidly, and spent a lot of time in the library. My mom was a voracious reader and through her example, I learned to love books. I read constantly, whether it was Edgar Rice Burroughs and the Tarzan novels, The Black Stallion, and then on to science fiction, either H.G. Wells, Jules Verne, Robert Heinlein or Isaac Asimov. I thought one day it would be really cool to write. My brothers and sisters were the early targets for my storytelling. My goal was to see if I could get them to believe the things I made up. I guess seeing a novel I wrote on a bookstore shelf was something of a pipe dream. I was on a clear track toward becoming a veterinarian.

I became a veterinarian and started my practice, but I still had this notion of writing. So, I joined a writing club in Sacramento and went to meetings. Different authors spoke there, and I eventually joined a critique group. I still have a connection to them, and right now, they're reading a book I've just written and I'm sure they'll tear it apart and help me make it better. I wrote a bunch of short stories which were never published. I then wrote a novel and was lucky enough to have that first one sell.

And now you write full-time?

Yes, although I still do some volunteer work. I spend one Sunday a month doing veterinary work, and my great claim to fame is not that I'm on the bestseller list, but that I can still neuter a cat in thirty seconds. (Laughter)

You co-wrote The Kill Switch with Grant Blackwood. How did this partnership work?

We've known each other for a while. He's a navy veteran. When I wanted to do a spin-off pf the Sigma Force with Tucker and Kane, I needed to capture a military mindset. But, I've never been in the military and didn't know if I could write military stuff with verisimilitude. Grant could handle the military mindset, the hardware and weaponry, while I could bring the animals, science and medicine to the project.

My schedule was very busy and I didn't know if I could fit another full novel into it. I've never collaborated before this year. Writing has always been a solo occupation, and every writing problem that's arisen, I've had to solve on my own. Working with someone else is different and has helped me flex my literary muscles. I've learned a good many things from Grant.

Did you and he write different segments of the novel?

We did a detailed outline of this plot-driven novel. Then we decided who could tell which part of the story best. Grant would get first crack at writing something more military. I'd get first crack at writing things more science or animal-oriented. We divided things; wrote it all up; and exchanged what we'd written. We'd talk once a week about plot, character, and go back-and-forth about what worked best. It was sort of neat because you would think we'd get into a lot of arguments, but oddly we didn't. Occasionally, we'd come to loggerheads about which way to take the story -- mine or his -- but during our conversations, we'd come up with a third solution which neither of us would have thought of on our own. The book is really stronger because of that.

In a sense, your novels could be called historical thrillers. Are you a history buff?

I am. In the third grade, I wanted to be either a veterinarian or an archaeologist. That was career option number two. I've always loved history and science. I've always been something of an armchair archaeologist. I often put my characters in caves looking for something that's been hidden for centuries. In fact, the first book I wrote, Subterranean, dealt with a cavern system two miles beneath Antarctica.

What do you read for enjoyment?

I'm an avid reader. I have a bevy of authors where each time one of their books comes out, I read it. I don't just read thrillers. I still read science fiction, modern thrillers, and historical mysteries. I have different favorites in different genres: George R. Martin, whom I've been following for almost thirty years, Steve Berry, Clive Cussler, Tom Clancy and some others.

If you could have any six people over for dinner, writers or figures from history -- living or dead -- who would they be?

I would love to sit down with Michael Creighton. When I wrote Subterranean, the book right above me on the shelf was Jurassic Park. I had no formal training in writing, so I used Jurassic Park as a template. Rather than reinvent the wheel, I looked at the way he set the novel up and learned from that.

I'd love to meet Howard Carter, the archeologist who discovered the tomb of Tutankhamun. Mark Twain would make for some very entertaining conversation. It's a poorly kept secret that I have written fantasy novels under the pen name of James Clemens. Plato or Socrates would round things out and we'd have a great mix of people.

What's next for James Rollins?

At the end of the summer, my next Sigma novel called The Sixth Extinction will be coming out. It won't be featuring Tucker Wayne or Kane but will have a Siberian husky in it.

Congratulations on writing a riveting thriller with a protagonist working with a great canine partner.

Mark Rubinstein is the author of Mad Dog House, Love Gone Mad and The Foot Soldier.