I first met Benny Widyono at an Indonesian Consulate fete years ago. I knew upon meeting him that he had an extraordinary mind and knew Asia's southeast as well as he knew this nation's northeast. Living in Connecticut and commuting to his office at the U.N. for decades - when he wasn't living in Phnom Phen, clued me into that reality. I told him if he ever wrote his memoirs I wanted to read them. Sure enough, they arrived by post last week. And they are riveting. 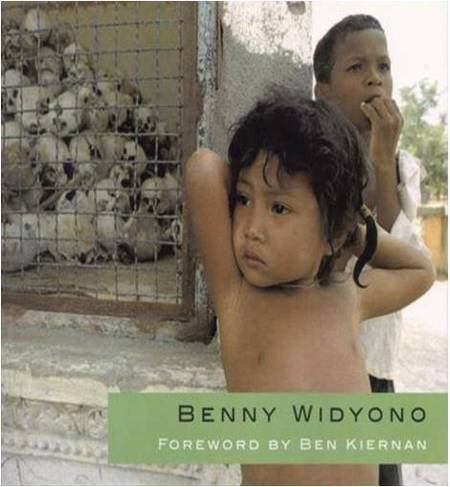 The book Dancing in Shadows: Sihanouk, the Khmer Rouge, and the United Nations in Cambodia has just been published. It is excellent. I had planned to read it next month, but I could not put it down. It is well written, engaging, and highly informative. I now understand so much more of Cambodia's Cold-War history and how it led to the Killing Fields in which about two million Cambodians perished. Google reviewers have given this excellent book 4.5 stars. 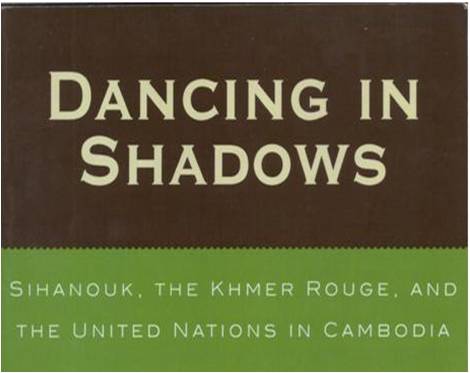 Dr. Benny Widyono was born "Hong Lan Oei," but during the madness of the anti communist/anti-Chinese period in Indonesia that killed 800,000 suspected Communists including ethnic Chinese - also a result of the Cold War - his name was "nativized" under the Suharto regime. Indonesians were still not allowed to read or speak Chinese when I first arrived there in 1995. Thus, my struggle to adopt an Indonesian Chinese infant then to get him away from there. However, today normalcy has returned to the Republic and Chinese language and culture are no longer criminalized.

Benny is thus an excellent guide to post-colonial Cambodia. As a recipient of the title of Commandeur de L'Ordre Royal de Sahametrey in 2004, the highest title for civilians bestowed by H.M. King Sihanouk of Cambodia, Benny played an integral role working with the U.N. in the recovery from the death and destruction of Pol Pot in a way that a non-South East Asian could have. Another key player at the time was the Japanese head of United Nations in Cambodia, Yasushi Akashi.

Benny notes in his book the King's words to the Japanese head of the U.N. presence in Cambodia:

"I wish to thank you, Excellency Mr. Yasushi Akashi, for sending another prince from Java to help bring peace to Cambodia," quipped Norodom Sihanouk, the King of Cambodia, referring to me.

We were at the official inauguration of my office, the provincial headquarters of the U.N. Transitional Authority on Cambodia (UNTAC) in Siemreap, Cambodia in 1992, the U.N. Peacekeeping operation established to bring peace to Cambodia.

Prior to our arrival, Cambodia was, due to its political location, been for 20 years the subject of turmoil, civil war and Khmer Rouge induced genocide. To end the stalemate of Cambodia having two governments... the U.N. became the temporary government until elections could be held.

Yasushi Akashi was the head of UNTAC and therefore, temporarily, the head of the country. I was his "governor" of Siemreap Province, home of the world famous Angkor Wat temple.

Benny's life is fascinating because he was raised in Indonesia in a minority religion - Roman Catholicism - and yet he attended the most prestigious university there, the University of Indonesia in Jakarta. He went on to study economics in the University of Texas. His Ph.D. dissertation compared the role of petroleum in economic development in Mexico and Indonesia. One week after he graduated he was offered a position with the United Nations in Thailand, beginning his professional and personal odyssey.

In 1981, Benny was transferred back to New York to work on helping countries cope with multinational corporations. In his new capacity he writes of coming home late from New York City as now his work at the U.N. consisted of "going to endless cocktail parties to lobby with ambassadors and other diplomats of member states. Most of the work gets done in these parties."

At the U.N. cocktail parties, he notes ruefully, the poorer the country the more lavish its reception:

One day Ethiopia celebrated its tenth anniversary of the Marxist revolution in that country with unlimited shrimps and other delicacies and whiskey and wine flowing all evening while we see pictures on BBC TV of starving Ethiopians looking like corpses.

Another anomaly was that the Khmer Rouge ambassador, who was responsible for killing 1.7 million of its own people, would strut about shaking hands with everybody to lobby against that bad fellow Hun Sen, Prime Minister of Cambodia who de facto ruled the country since 1979, because the U.S. and China spearheaded a resolution in the U.N. to continue to recognize the Khmer Rouge instead of the People's Republic of Kampuchea.

It is this encounter with the Khmer Rouge ambassador, plus his experiences in Thailand where he had witnessed Cambodian refugees escape the Khmer Rouge atrocities and appear -- one by one -- from the jungle like emaciated corpses. These survivors reminded him of those in Ethiopia which made me decide to volunteer for Cambodian service for the U.N. I wrote about such survivors such as my good friend Ambassador Sichan Siv, whose story I have also told. 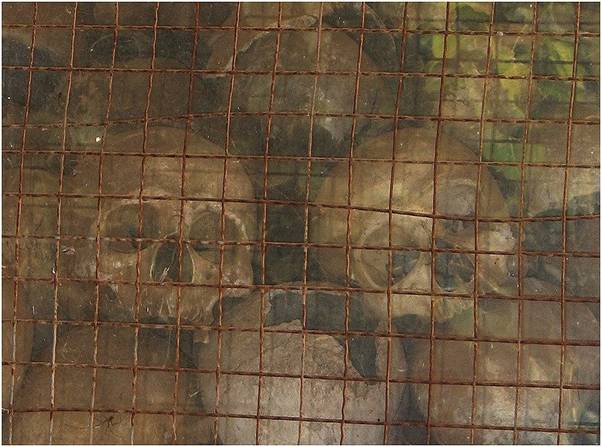 Benny eventually represented the U.N. Secretary General in Cambodia after the Killing Fields in which about two million Cambodians perished

We all have this myth that we control our lives. Benny tells it as it is:

One day, in the restroom of my floor, the 31st floor of the United Nations, I stood next to Yasushi Akashi, who just became the head of UNTAC in Cambodia. I congratulated him and asked whether he can take me along to Cambodia. Knowing me well he said yes, you will be the governor of Siemreap Province., which has Angkor Wat and is the most Khmer Rouge invested province.

I said yes as I did not want to languish in some idyllic province on the beach where nothing happened. Thus the last five years I was transferred to Cambodia, where I was at the political forefront of the political turmoil in the tragedy of Cambodia. It turned out to be the best assignment and I found out that my real fascination was with politics which I watched first hand. It is like studying while getting paid at the same time. 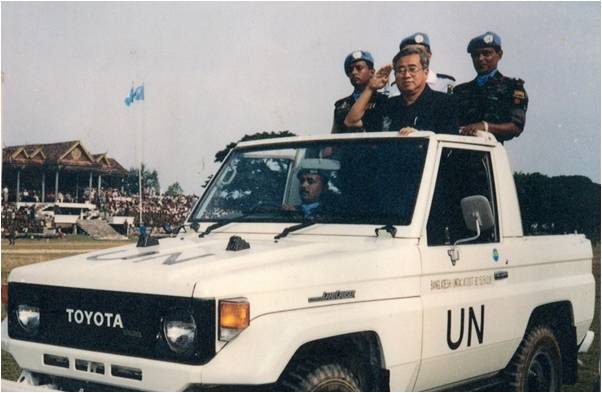 In his capacity of UNTAC Governor, Benny inspected U.N. forces in Cambodia.

Benny writes in his book that Akashi was right:

I got plenty of excitement and adventure in Siemreap where the Khmer Rouge murderers were ever present although at day time Hun Sen's People's Republic of Kampuchea (PRK) reigned supreme in almost all the country.

Siemreap was attacked many times by the Khmer Rouge. Since it was too dangerous for wives to join their husbands my wife stayed in Connecticut although she came to visit me several times. Live was very primitive as the Hun Sen government was isolated by the U.N.

Danger was ever present and at night I could not sleep if I don't hear mortar fire as Hun Sen's troops were fighting the Khmer Rouge. One day Siemreap was attacked by 800 Khmer Rouge. I called my wife in Stamford from the only telephone at my headquarters. After a full day Hun Sen troops drove them away.

Soon he received a phone call from the powers that were in U.N. Headquarters in New York and he was appointed the political envoy of the Secretary-General Boutros Boutros Ghali in Cambodia. 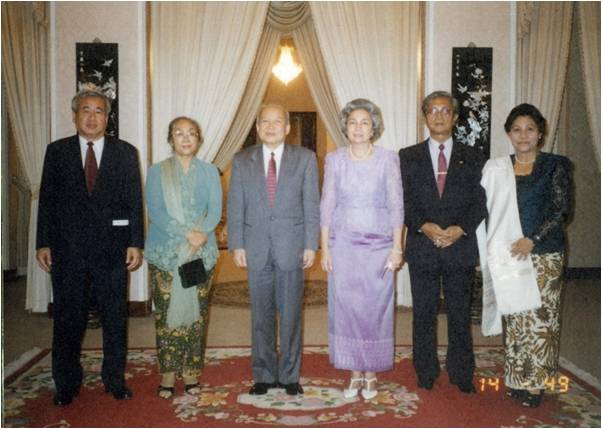 Soon, his wife joined him full time. They were often invited, together with other ambassadors, to dinner with the King. He watched over dinners and diplomatic dispatches - and reported to his new boss Kofi Annan - that as Cambodia acquired two prime ministers who were former enemies, and with the "wily king pulling the string from behind the scene," he smelled trouble. Both sides clashed and in 1997 Hun Sen became the only prime minister. Benny then reached the age of 60 -- the mandatorily retirement age at the U.N. - and he moved back to the U.S. to teach at several universities including Cornell. 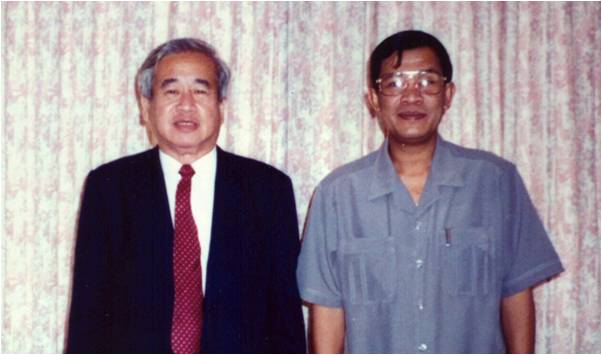 Dr. Benny Widyono with Prime Minister Hun Sen who after the clash in 1997 continued to consolidate his power until today 2010.

Benny has remained active with Cambodia and continues includes a board position with the Peoples Improvement Organization, an NGO running slum area schools in Phnom Penh now with 850 students who each day get lunch and education in English. These schools were founded one of his former staffers, Phymean Noun, who became a CNN hero in 2009 for her work with children. 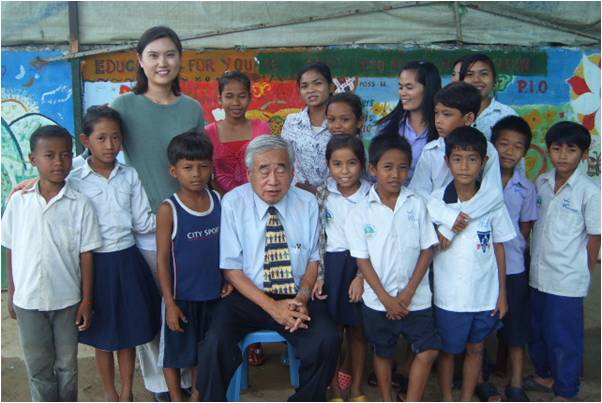 Benny sits on the Board position of an NGO running slum area schools in Phnom Penh founded one of his former staffers honored as a CNN hero for her work with children.

I have been delighted to know Dr. Benny Widyono, born "Hong Lan Oei," as an outstanding Indonesian-American active with the United Nations in Cambodia and around the world. His compassion for all - especially children - has impressed me greatly. Above and beyond being a thought leader and global citizen, Benny has been able to share his gripping life in an exceptional book. I highly recommend it.

Jim Luce on Cambodia and Cambodian-Americans

Jim Luce on the United Nations