Alicia Silverstone defines herself not only as an actress and author, but as an environmentalist and vegan. In her book The Kind Diet, Alicia Silverstone sets out a simple guide to feeling great, losing weight, and saving our planet.

The Kind Diet is not a diet book per se. The Kind Diet is about being truly kind to yourself and the planet via the foods you put in your body. It helps one strive to achieve the best natural health; to look and feel most alive. The Kind Diet helped Alicia more connect to herself, her community, and the universe than she ever anticipated. Now she wants to share her message! 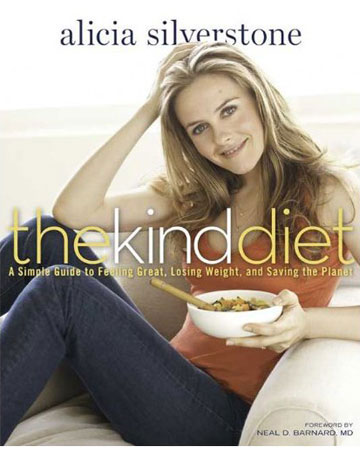 The vegan actress believes we have moved away from real food to only factory made. As a consequence, our culture and planet are suffering. Alicia points to the following statistic: eating one 16-ounce steak takes the same amount of water to produce as six months of showers. Therefore, you are not being very effective if you are saving water by taking shorter showers but still eating meat. Alicia's basic premise: if you are really interested in protecting the planet, you have to look at what you're eating. The Kind Diet offers a gentle path towards moving towards a vegan diet that is better for our planet.

The Kind Diet is broken down into three phases: the flirt, vegan, and superheroes levels. The goal is to gradually wean the dieter off meat rather than demand an overnight change. It is also about eating foods we fail to eat often enough such as whole grains, seaweed, watercrest, and kale. That being said, there is caution to those on a vegan diet who may suffer calcium, vitamin D, B12, and iron deficiencies.

Alicia Silverstone appreciates that it is very hard to be vegan. The Kind Diet is the CliffNotes version to a vegan way of life. If you are curious about feeling your best and protecting the planet, read and enjoy Alicia's green cuisine. Pretty soon you may just be craving tempeh instead of bacon!

Here is one of my favorite recipes from her book! 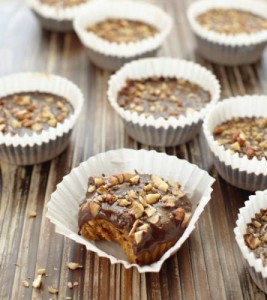 PREPARATION
1. Line a 12-cup muffin tin with paper liners. (If You Care makes unbleached liners made from recycled paper.) Set aside.
2. Melt the butter in a small saucepan over medium heat.
3. Stir in the peanut butter, graham cracker crumbs, and maple sugar and mix well.
4. Remove the mixture from the heat. Evenly divide the mixture, approximately 2 tablespoons per cup, among the muffin cups.
5. Combine the chocolate and milk in another pan. Stir over medium heat until the chocolate has melted.
6. Spoon the chocolate evenly over the peanut butter mixture.
7. Top with chopped nuts.
8. Place in the refrigerator to set for at least 2 hours before serving.

* Excerpted from The Kind Diet by Alicia Silverstone (2009, Rodale).