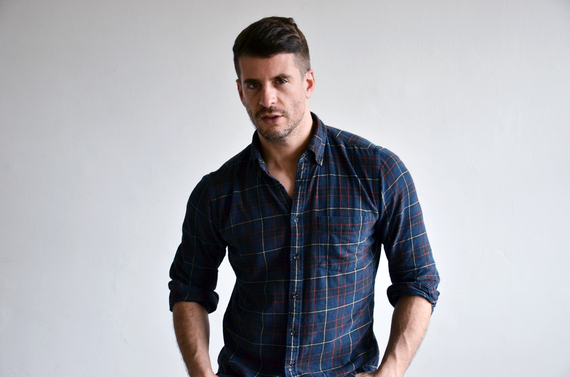 Alexis Gregory is one of the most electric and versatile young actors working today. As a favorite in seminal British filmmaker and playwright Rikki Beadle-Blair's Kick Off, FIT and Stonewall, Gregory has created characters who combine intense vulnerability and steely strength with a healthy sprinkling of sexiness and ruthless pragmatism. As Beadle-Blair might put it, Alexis Gregory knows how to be "in the room."

When asked how he got into the acting industry, he says he found his agent at the age of 15 and got to work immediately amassing an impressive résumé in film, TV and commercials. "Looking back," he says, "I can see that as a child, I made it all happen. I was a determined young thing when I wanted to be."

This determination helped him create his most challenging role to date, a feisty transgender woman named Dominique, in his play Slap, which was performed at Theatre Royal Stratford East and showcased on Channel 4 as the channel's first-ever on-site theatrical presentation. Regarding his professional experience as an openly gay actor, Gregory says that "it doesn't come without complications or hurdles, but I am very honest in my work as a writer, and in my own life too. I couldn't do it any other way at this stage. I have struggled with it in the past, though, and have had to go on my own journey with it all, as well."

This journey has led him to write and perform the lead role in his second play, Bright Skin Light, which is currently in development. The piece is about a gay son reunited with his gay father, who abandoned the family 20 years earlier. It is a play that examines the early years of the AIDS crisis in London and current responses to the virus, as well as themes of art, family, love, addiction, loss and redemption, set over the course of a morning in a critical-care unit in a London hospital.

"I am also developing Safe," he says, "a piece of verbatim theater for the Albert Kennedy Trust, which is a charity that supports homeless and at-risk LGBT youth. The piece will be made up of the actual words spoken to me in the interviews, including those of a trans woman whose story of survival is quite astonishing; a gay trans man who is not only having to learn to navigate society as a man now but as a gay man too; and also a young Nigerian-born gay man who, when living over here with his family, was outed to them and had to escape from being sent back to Nigeria for 'curing.'"

When asked whether he feels that there is still a long way to go for gay actors and performers in the UK, his answer is yes. "Obviously it's getting better," he says, "but being out and gay can stop you getting auditions for straight roles, and I have actor friends who are advised by industry figures to stay in the closet and not post pictures of themselves with their boyfriends on Facebook. It is a complicated issue, though, and I am by no means pointing a singular finger at the industry. I think you just have to get on with it and do your own thing. I have been writing about a world that I inhabit and my own take on it, and this is what has got me noticed as a writer, so I have no complaints. Embracing and writing about my truth has opened doors for me. I hope it continues to do so."