Prince Hussein bin Talal, who became King of Jordan following the assassination of his grandfather and the abdication of his father, was a risk-taker both politically and personally. He asserted the independence of Jordan against British rule and repeatedly reached out to other nations to secure peace in the region. He also enjoyed pushing the envelope through sports and hobbies: a trained pilot, he flew jet aircraft and helicopters and enjoyed racing around Jordan on his motorcycle.

Robert Keeley was a political officer in Jordan from 1958-1960 when he became close with the King. Keeley was about the same age and they shared a hobby: go-kart racing. He was interviewed by ADST in 1991. Read the entire account on ADST.org. This account was edited by S. Kannan.

KEELEY: My wife and I got to know the King quite well. There was a small social entourage made up of a few, very few Palestinians and several young foreign diplomats-British and Americans -- who became quite well acquainted with the King. We used to socialize with him a good deal.

One reason for this situation was that the King was then between marriages. He had divorced Queen Dina; he had a small daughter, Alia. This was before he married the British woman, Toni [Antoinette] Gardiner, who became his second wife. He was quite lonely; I would guess he was 23 or 24, maybe younger.

He was restless by nature; he loved danger, dangerous sports-e.g., racing cars and motorcycles. He also flew airplanes, helicopters, and he water skied; he had to be active. He preferred athletics, particularly those with an element of danger. He was quite lonely. He couldn't socialize with his subjects; he was a King after all. There wasn't an aristocracy in Jordan as you might find in a country like Britain. I doubt that Prince Charles has ever needed to be lonely, unless he wanted to be, which he apparently does. He can associate with lots of people; he went to schools.

Hussein, on the other hand, went to [the British Royal Military Academy] Sandhurst. He didn't have a real college experience. He became King at the age of seventeen-there has always been a dispute over whether he was 16 or 17 since birthdays are counted differently in Arab culture.

The British and American ambassadors, among others, thought it would be nice to find some companionship for His Majesty. The Keeleys fitted in more or less by circumstance because we were closer to his age than other Americans. So we saw a great deal of him.

We had square dancing parties -- known as Scottish dancing in Amman -- together. He liked "parlor" games and all sorts of games; he liked to dance. Sometimes we would go to his home in the Jordan Valley and stay up until all hours of the morning-four or five o'clock.

I found it sometimes difficult to go to work the next day, but Ambassador Sheldon Mills said that it was part of the job and that if I needed to sleep late, to go ahead. If I needed an afternoon nap, that was all right too. He even offered me his car to go home for my nap. Of course, he did that himself and he would just drop me off at my house on the way to his.

Eventually, we started a go-kart club (as far as I know this has never been recorded.) My wife and I were in Boston just a few days ago with another member of the "go-kart" club, Bill Bromell and his wife; he showed me a photograph of the key members.

The club idea came out of a discussion we had with a Mr. Dalgleish, who was a Scot-British Air Force officer, who had taught the King to fly; he flew co-pilot most of the time when the King was at the controls. He had been sent back to Jordan in the summer of 1958 by the British after the [Suez Canal] crisis. 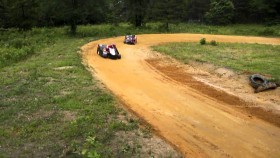 Once a week there were sports car races. The King had a number of cars, including a gull-winged Mercedes and an Aston-Martin; several governments had given him racing cars because they knew of his passion. Of course these cars were faster than anyone else's. He was also the best driver, as well as the gutsiest.

He loved speed and therefore the races were never a contest. He always won regardless of who and what else was in the race. I participated in these races a few times, but I didn't show much speed or agility in my nine-passenger Ford station wagon. So that kind of racing became boring to the King and to others.

So we were discussing the situation with Dalgleish one day; I don't remember whose idea it was. In any case, we agreed that go-karts were worth trying. They are small, close to the ground, so that when you went 70 kilometers per hour, it really felt like 200 with the wind blowing in your face and the ground passing along so rapidly.

Those races were not terribly dangerous. The karts tend to spin rather than turn over, and even if they turn over, they have a sort of roll bar. You wear a helmet. In any case, you are not going that fast when you make your turns. If you are a skillful driver, an accident will probably not be fatal, but you can certainly break some bones. The proposal was discussed with the King; he was quite disdainful initially because the go-karts were described as children's toys.

We ended up getting the "Rolls Royce" of go-karts. They were quite expensive-about $450, which was a lot of money for a go-kart in those days-made in Britain, with very large motorcycle engines with considerable horse-power. We procured about ten or twelve of them, each of us paying for our own.

Fortunately, there was a Royal Jordanian Air Force plane in Britain being serviced; we found out when it was returning and we got the go-karts loaded on it so that the transportation at least was free.

We built a track out at the airport in a figure eight configuration. It was all very professional; we even had a small reviewing stand for spectators and a large stop watch, a flag for starting purposes and a blackboard to keep track of events on the track.

The races ran on Thursday or Friday (which was a holiday) afternoons. We were all supposed to show up at the royal garage the day before the races and work on our go-karts to be sure they were in racing shape. It was all supposed to be very educational, learning to be our own mechanics. We did this for quite a while, for at least a year -- during my second year in Amman.

Of course, the King almost always won because he was a very good driver and had more nerve than the rest of us; he took more chances. He also had another advantage which none of us dared to complain about: he had two go-karts, so that if he wrecked one, he always had a back-up to keep him in the action. The rest of us had only one and therefore had to be a little more careful going around the turns lest we do something horrible and wreck our karts and ourselves. 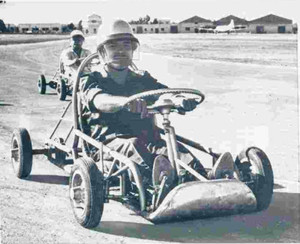 We did have crack-ups; spinning out, if you took a turn too rapidly and too sharply, was quite an adventure. I think in all the races I participated in -- and there were eight or ten each racing day -- I beat the King once, probably because he had a spin-out which would have taken him out of the race.

That was indicative of his record. He didn't like being beaten, he liked to win. But most of all, he liked the competition.

Some of our wives also participated, but usually in women-only races. We practiced segregation in those days. Young Prince Hassan, [at one time] the Crown Prince but then a pre-teenager, got to participate in the women's races. This is just illustrative of the kinds of things we did. These were not good opportunities to discuss politics or current events or the future of Jordan or the Hashemite monarchy.

So there weren't many substantive discussions, but it was useful from our point of view because it helped his morale and kept him from getting depressed and feeling morose, although, as I said, he was very lonely-between marriages, no other social life with people of his own age. There were a couple of Palestinians who had been pals of his in school or even earlier and had therefore known him for quite a while.

I was the first to leave the go-kart club and then some rules had to be made up. We decided you could sell your cart only to another member or to someone who had to be approved by the King and the others to be admitted to the club. I didn't know quite what to do, but Dalgleish, as usual, took care of it, and told me that Colonel Gardiner wanted to purchase my go-kart. Gardiner was our time keeper; his daughter, Toni, was the flag waver.

The kart was really being bought for her and I should have noticed the clue that some romance might be budding, which in fact it was. Gardiner became the club member, but his daughter did the driving. Not only did she drive in the women's races, but she ended up marrying the King.