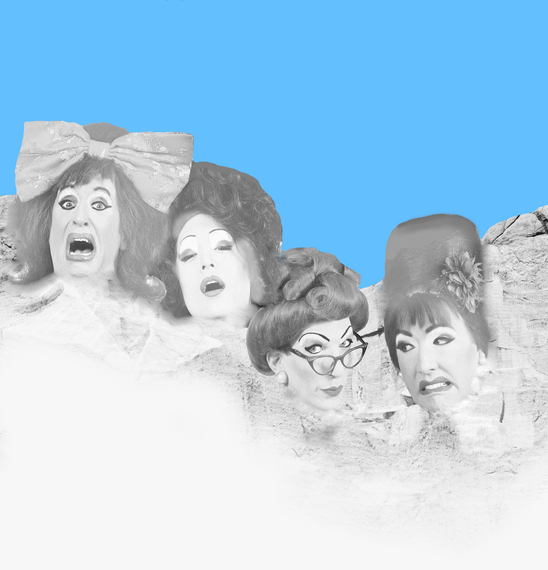 If it feels as if America suffers from Electile Dysfunction, that's because it does. With the train wreck that is presumptive GOP nominee Donald Trump, 2016 certainly stands out as one of the most contentious election years in decades. Like an exposed phantom menace, Trump--his words, his facial anomalies, his hair!--continues to fascinate.

The Kinsey Sicks, the hilarious quartet that originated in the San Francisco Bay Area more than 20 years ago, may be the best reality enema to hit America in years. To be sure, The Kinsey Sicks are the most dynamic, witty, brilliant and talented Cirque du Estrogen to ever weave iteself into modern pop culture.

In their popular, spirited show, "Electile Dysfunction," for instance, the quartet transforms themselves into "Republicans" on stage and use broad strokes of humor and song as they envelope-push their way through a bevy of tongue-in-cheek sets designed to, well, keep America in check (see videos below). Oh, and they've playfully nominated themselves as "the first Dragapella Beautyshop Quartet" destined to serve as President of the United States.

Nathan Marken (Winnie), Ben Schatz (Rachel), Spencer Brown (Trampolina), and Jeff Manabat (Trixie) each breathe life into the four very different personas. The group's moniker, in case you haven't figured it out, is a play off of "Kinsey 6" from The Kinsey Scale. I recently caught up with the ladies to chat up all things electile, dysfunctional and more. Onward ...

Greg Archer: So, let's talk about your mission this year with "Electile Dysfunction." We're experiencing a most contentious election year.

Trampolina: It's not just a contentious election year but a contemptuous one at that! I think our mission is clear: if reality show personalities can become the Republican nominee, so can drag queens!

Winnie: Our mission is to shamelessly self-promote our way to the White House by out-pandering even the presumptive nominee of the GOP! By being as ridiculous as we can be, we are hoping no one will notice that we are even less qualified than any of the Presidential hopefuls this year and therefore deserve to be your next President.

Trixie: Our mission is to become the first Dragapella® Beautyshop Quartet to be elected President of the United States on the Republican ticket. Watch as we take back America by out­pandering, out­conspiracy-ing, theorizing, and out­outlandishing even the most cynical of the current crop of Presidential candidates through sharp­-witted original songs and biting parodies, delivered in glorious four­-part harmony.

Rachel: Do you know what a challenge it is to be more ridiculous than Donald Trump? Come see if we succeed!

Greg Archer: When you think of Donald Trump, what comes to mind?

Winnie: This is what they meant by "Trouble with Tribbles." Who knew they had megalomaniacal mind control tendencies!

Greg Archer: Any advice you would like to give Trump?

Trampolina: I think it's too late to offer advice to someone that far gone.

Winnie: Leave now, while you have some shred of dignity. Rachel lost hers years ago, and now look where we are!

Trixie: What a waste of good advice! Though a night in a dress and sensible heels will likely do him some good. No, that would be terrible. A dress and four-­inch stilettos is better.

Rachel: He hasn't attacked the queer community as much as he has other minorities. It makes me feel so left out. He really should step up.

Greg Archer: Advice to Hillary? Girl to girl of course.

Rachel: Get drunk more and say what you really think. Really, how can you look bad compared to the competition?

Greg Archer: And ... on a more serious note, who would you recommend for Hillary in terms of moving forward with a proper make­up and wardrobe overhaul?

Winnie: I would recommend the queen mother herself. Yes, Queen Elizabeth II. ­­Classic, yet royally understated. That is, if you ignore the crown ... and the email server ... and the outrageous corporate donors. But I digress ...

Greg Archer: As a team, you're all in the flow. What does it take to keep that good flow going creatively?

Rachel: Sorry, but as someone in her fifties, I stopped being in the flow several years ago. I don't miss the cramping in the least, nor do I think it made me more creative.

Greg Archer: Your popularity continues to rise--you were on CNN recently and that's a big thing. Any really big things coming up in the next six months?

Winnie: Between Trixie learning how to Snapchat and Trampy finally learning the English alphabet, we've managed to squeeze in two rounds of tours on the West Coast. We will be making a much-­anticipated return to the Edinburgh Fringe Festival with a Fringe­ified version of our "Chicks with Shticks" show, aptly­ named "The Lady Cocks of Bang Boys." We also hope to have a new webseries edited for in the next few months featuring the gals romping in the San Francisco Bay Area­­. You may see some familiar faces.

Greg Archer: What song sums up this election year the most--that you perform or otherwise?

Trixie: For a song that we perform, it's a toss up between "I Wanna Be a Republican" or "Sikh to Sheik." Just take a gander at some of our lyrics:

I Wanna Be a Republican
Lower taxes are God's plan. Global warming helps my tan. Give a gun to every man
To protect us from non­Aryans. When you know you're better than All those non­Americans,
There's no need to join the Klan, Just become Republican.
"Sikh to Sheik"
Each tribe has its own religion.
Each god has his own mystique.
Each god somehow favors his tribe's interests geopolitique. So we find fault with fanatics.
We define them blind and weak.
But it's fine when the fanatic is our rebbe, pope, or sheik.

Otherwise, the song that best sums up this election year is from Canada's greatest modern poet, Justin Bieber: "Sorry."

Greg Archer: Any remaining advice you'd love to bestow upon us. You know, all of us here in The Peanut Gallery who are watching as this election year explodes--or is it implodes?

Trixie: Don't stare directly into the explosion. It may induce long­-term irreparable damage.

Catch up on all the happenings with The Kinsey Sicks here. Check them out on CNN and on stage below.