Sports stadium Jumbo-trons are powerful beings. They can make otherwise sane people dance wildly in the hopes of appearing on camera, cheer themselves into a frenzy to score higher on a loud-o-meter, and turn a crowd of adults into fifth graders trying to force two people to uncomfortably kiss on a "Kiss Cam." Now a staple at many sports games, the Kiss Cam, the morality of which has already been explicitly skewered in "The Onion," searches the audience for couples, puts them on camera and waits for them to kiss as the crowd cheers along. The practice is not ubiquitous, though. Mike Wise, in this morning's Washington Post, reports that the Washington Mystics are not employing a Kiss Cam in the Verizon Center because they don't want to put lesbians on camera, as it might confuse some of the kids in attendance. This reasoning, disturbing in its own right, is even more dubious in light of one simple fact: The Verizon Center does put same sex people on the "Kiss Cam," they just do it to get a laugh.

The necessary background information here, supplied by Wise, is the demographics of the WNBA fan base:

Understood is that women's professional basketball has two major fan bases: dads and daughters, and lesbians.

That is the reason they don't put couples, some of whom will be lesbian couples, on the "Kiss Cam":

"We got a lot of kids here," Sheila Johnson, the Mystics' managing partner, said when asked last week at a game. "We just don't find it appropriate."

But of course it isn't. It isn't the policy of many teams, and it is certainly not the policy in the Verizon Center in Washington D.C., where the Washington Mystics play. That's because the Washington Wizards have a running "gag" at the end of their "Kiss Cam" where they put two players from the opposing team on the "Kiss Cam." Why do they do this? The underlying joke (and it does score huge laughs) is that it is hilarious to see two males placed within a heart because it is emasculating to imply that they would kiss. Ha.

As an example, here is a series of pictures of Juwan Howard and another Charlotte Bobcat (who increasingly "get" the "joke"):

Here is Nate Robinson and Al Harrington of the New York Knicks absolutely giddy after being victimized by this incredibly hilarious prank: 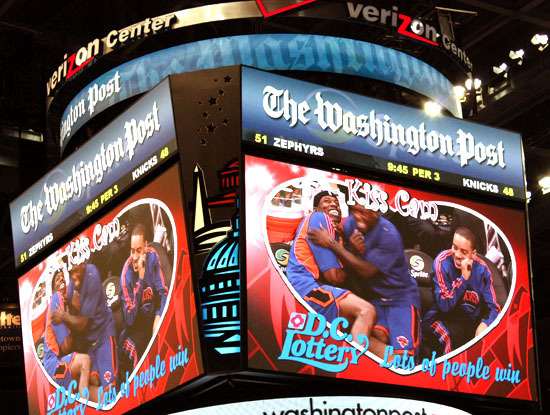 The WNBA's Washington Mystics won't show actual homosexual couples kiss, while in the very same Verizon Center, the Washington Wizards regularly show two of the Wizards male opponents in their "Kiss Cam." The message to fans is simple. Two same-sexed, loving, gay people kissing is inappropriate, but the idea of two same-sexed straight people kissing is hilarious. Homosexuality (at Mystics games) is inappropriate at best, and fodder for a joke (at Wizards games) at worst.

So they won't show gay couples on screen at Mystics games so no one has to feel uncomfortable. Except for gay people, whose lifestyle is belittled into a cheap punch line. Ha.