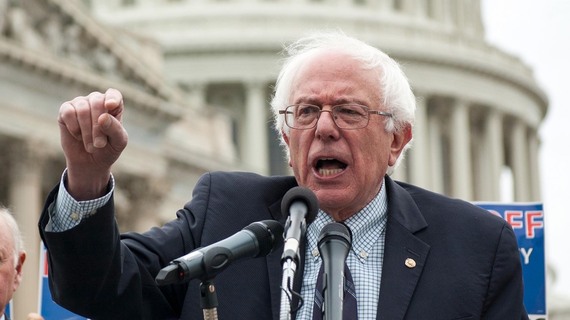 It is confounding, in watching Vermont Socialist Bernie Sanders' unevenly successful primary campaign against Democrat insider Hillary Clinton, why he has not gone in for the kill. He enjoys the same populist tailwinds fueling the more successful, and equally unprecedented, Republican campaign of Donald J. Trump. His voters are just as angry at Establishment politics, donors, and economics.

Though Sanders' voters don't seem as bothered as Trump's by the broken borders that contribute to depressed wages, higher unemployment, and rampant inflows of drugs and human trafficking, they are, nevertheless, equally tired of the global trade deals that benefit multinational corporations at the expense of American workers.

Rust Belt union members, in particular, have been economically decimated by the globalization bonanza launched by Mrs. Clinton's husband - and backed by Mrs. Clinton, who called the TPP (the Trans-Pacific Partnership) the "gold standard in trade agreements" - while Mr. Sanders has long stormed the barricades against NAFTA (the North American Free Trade Agreement), TPP, and other free trade deals. 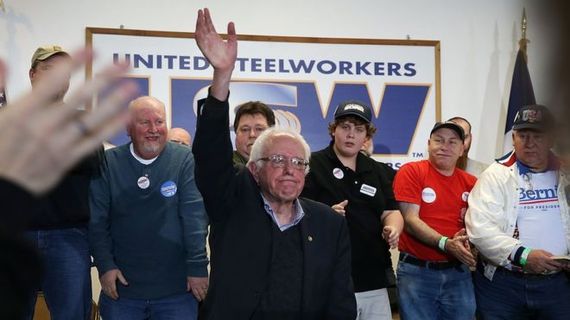 As a result, Sanders could defeat Mrs. Clinton by carrying the Rust Belt, which stretches from Michigan (which he recently won March 8 in a major upset) to March 15th contests in Ohio, Illinois and Missouri, to later votes in Wisconsin, Indiana, West Virginia, Pennsylvania and even Kentucky. He could also expand his populist economic appeal to liberal working class voters in states like Washington, Oregon, Montana, Wyoming, New Mexico, Arizona, South and North Dakota, and the crown jewel of liberal politics, California. All of these states are there for Sanders' snatching, even with Mrs. Clinton's solid support among older blacks and Hispanics.

However, for reasons that seem perversely self-defeating in an election year that is known for unfiltered candor, Mr. Sanders has held his fire. And for what reason? The former Secretary of State is not the fearsome Lady Macbeth of Republican stereotype. Barack Obama proved that conclusively. The often shrill, impersonal Mrs. Clinton has no Eva-Peron-like hold on the Democratic electorate, and no ability to engineer George-Wallace-like shenanigans to suppress voter turnout. Sanders has no worries of Clinton payback, nor should he be playing it safe in order to secure a VP slot, where he, like white working class hero Joe Biden before him, will be sent out to pasture: defanged, caricatured and emasculated.

Instead, Bernie has a real chance to make Mrs. Clinton yearn to be his VP. To get there, however, he has to stop pulling punches and go for the knockout blow. Wednesday night in the Univision debate, moderator Jorge Ramos - an otherwise shameful and unruly apologist for open borders and the horrors they engender - pointedly asked Mrs. Clinton, "If you get indicted, will you drop out?"

These Univision moderators were not messing around. So, why is Bernie messing around? Why did he not ask Mrs. Clinton that very question? Why is he giving the Secretary a pass on an issue that is not simply a matter of "overclassification," as Mrs. Clinton wants us to believe. 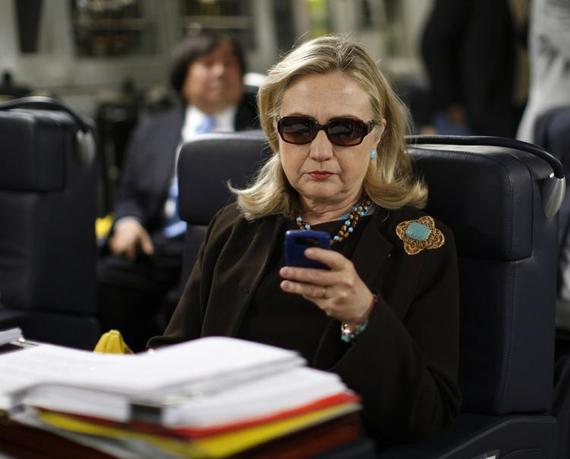 There are thousands of bureaucrats working in the State and Defense Departments right now (I've heard from a few off the record) who contend that they would be fired and prosecuted had they engaged in the same malfeasance and incompetence as Mrs. Clinton and her staff displayed in the handling of her sensitive digital communiqués. In particular, there is growing belief that Clinton violated the Intelligence Identities Protection Act (which doomed Scooter Libby). This 1982 law makes it a crime to deliberately or inadvertently reveal the true identity of any covert operative serving U.S. intelligence if that person has not previously been publicly acknowledged to be working for our spy agencies. Why is Bernie not making this point?

Below is the rejoinder that Sanders could and should give if he wants to wrestle the tenuous hold that the untrustworthy Mrs. Clinton has on the plurality of Democratic voters. With no more debates on the schedule, he needs to make these arguments at campaign rallies and in TV and radio interviews from now through June.

First, Sanders needs to break with DNC groupthink, and make a stink about Mrs. Clinton's lies after the September 11, 2012 terrorist attack on the U.S. diplomatic compound in Benghazi, Libya. As revealed in the last House Select Committee on Benghazi hearing, Mrs. Clinton emailed the truth about what happened at the Benghazi Consulate to the Libyan president and to her daughter Chelsea on the night of the attacks and to the Egyptian president the next day (it was, in fact, "a planned attack" by "an Al-Qaida-like group" that "had nothing to do with the film"), and then subsequently lied to the families of the Benghazi victims (saying it was a protest about an anti-Muslim You Tube video clip). 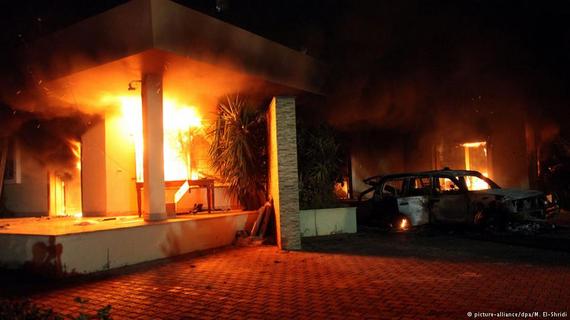 Sanders has made no noise about this. Why? Bernie needs to link Mrs. Clinton's fully documented lies on Benghazi to her recent lies about him (e.g., accusing Senator Sanders of opposing the auto bailout, which is patently false, and then linking him to border militia "known as Minutemen," which is patently absurd). There is with Mrs. Clinton a grotesque and recurring habit of bold-faced chicanery and deception. Sanders could effectively end her campaign by exposing it. Why won't he do it? Has someone gotten through to him? Does he think playing nice is a way to defeat her? Has he gone batty in his dotage?

Secondly, Sanders needs to get personal, by linking Mrs. Clinton's wealthy donor contributions to the lavish lifestyle that she and Mr. Clinton enjoy in bucolic Chappaqua, in New York's upper crust Westchester County. He needs to paint Mrs. Clinton as the radical chic poster pol that she clearly is. A candidate who will tilt far left during an election to capture populist thunder, but who has no real intention of deeply upsetting her status quo corporate backers. There is no better evidence of this than Federal Election Commission data, which reveals that tens of millions of dollars have been donated to Mrs. Clinton's campaign by some of the world's wealthiest hedge fund titans. 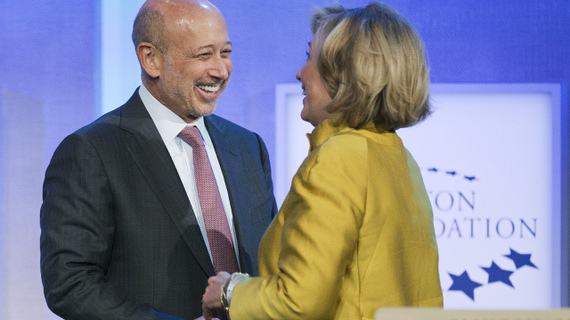 Sanders needs to stop focusing on the content of Mrs. Clinton's speeches at Wall Street investment bank Goldman Sachs - though his debate performance spiel on that head always generates applause - but, rather, note that Mrs. Clinton could have read from Das Kapital for an hour and still been paid the same fee. The point is that it was a wink-wink quid pro quo arrangement. He is on point when he says that it stretches the bounds of credulity that Goldman paid Mrs. Clinton $650,000 in speaking fees out of the goodness of their hearts. They wanted something in return. The bigger the give, the bigger the get.

Then Sanders lets up, and fails to close the deal. He needs to extend from Mrs. Cliinton's "market-rate" (read: exhorbitant) speaking fees to her husband's equally sizable speaking fees as head of the Clinton Foundation. And then Sanders needs to wrap it all up with a nice tidy bow, showing how the speaking fees of the Clintons and the sizable donations made to the Clinton Foundation ultimately affected Mrs. Clinton's policy decisions as Secretary of State. There is a mine field of possible transgressions here, but Sanders lays off. Why? 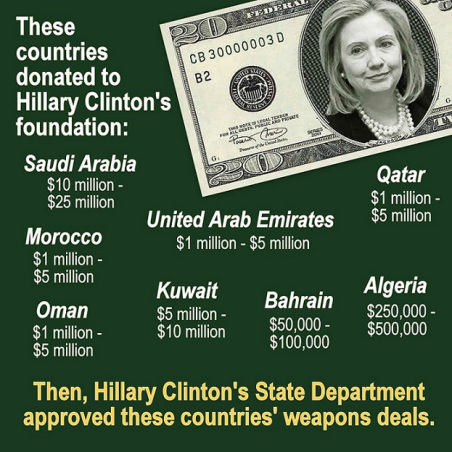 Either there is nothing in all this but insinuation or Team Sanders needs to work much harder to connect the corruption dots. For instance, Sanders could dig deeper into the Dodd-Frank Act Wall Street Reform and Consumer Protection Act and other legislation of interest to Wall Street to discover subtle policy compromises Mrs. Clinton might have made. Lobbyists and donors pay not only for political access, but also for tiny changes in legislative bills that go right over the heads of most voters and under the radar of most watchdogs, but have profound effects on the corporate bottom line. What were those compromises that Mrs. Clinton tacitly supported not just for Wall Street financial firms, but also for those firms' top clients?

Mrs. Clinton backed the $700 billion Wall Street bank bailout known as TARP (the infamous Troubled Asset Relief Program). You cannot tell me she is immune to Wall Street's influence. If she were not so influenced, as she laughably proclaims, why would she vociferously declaim her belief in campaign finance reform, as well as her opposition to Citizens United v. Federal Election Commission? Something does not square here, but Sanders refuses to exploit the contradiction.

Right now, Mr. Sanders best line of argument is that Mrs. Clinton is bought by the wealthy, connected donor class, while Sanders himself only takes money from small donors. Deeply reviled, if deliberately misunderstood, liberal media bogeyman, Donald J. Trump, one of Mrs. Clinton's previous donors, has openly copped to the pattern of corruption that the Vermont Senator excoriates. Mr. Sanders should use Mr. Trump's own words to implicate Mrs. Clinton as an active player of the game. Possible question by Bernie: "What did Mr. Trump get in return for his support of your campaigns, Mrs. Clinton?" 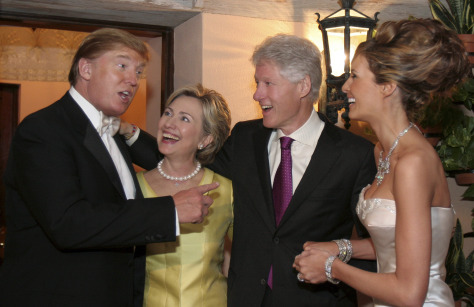 However, just as germane, "What did you not do that you could have done vis-à-vis Trump, George Soros, Goldman Sachs and your other wealthy backers and all those who contributed generously to your husband's foundation?" After all, sizable donations are not always made for blatant acts of legal skullduggery, but also as political hush money. Just as magazines do not gleefully launch investigative journalism stories on their largest advertisers, so officeholders do not wage war on their biggest backers.

In Mrs. Clinton's case, such corruption might have involved enacting window dressing reform in the form of Dodd-Frank Act, but not actually sending any bankers to jail. As one lobbyist told the Boston Globe in summing up Mrs. Clinton's attitudes towards Wall Street: "not helpful, but also not harmful." It's that "not harmful" part that Mr. Sanders needs to sink his dentures into.

That said, it is no longer sufficient for Mr. Sanders to "insinuate" corruption. He has to prove it. Until he does, he will fail to deliver the knockout blow his supporters crave and he desperately needs if he is to overcome Mrs. Clinton's fundamentally corrupt advantage with Democratic superdelegates (read: party insiders).