"I am progressive, I am liberal. I make no apologies." Those were the first ten words written by Markos Moulitsas Zuniga when the Web log Daily Kos was launched in 2002. At the time the Bush Administration was hellbent on invading Iraq. Daily Kos gave people an outlet to vent their frustrations. Then the blog took on a life of its own. It became the medium through which bloggers could organize, take on "the gatekeepers," and work for political change.

In his new book, Taking on the System:Rules for Radical Change in a Digital Era, Markos documents the power of online organizing. In the tradition of Saul Alinsky's Rules for Radicals, Markos lays out the game plan for contemporary activists: How to connect, coordinate, and command attention; how to embrace inevitable attacks and make them work for you; and how to design powerful narratives and drive them into the the mainstream. OffTheBus caught up with "the blogfather" recently and discussed the new book. 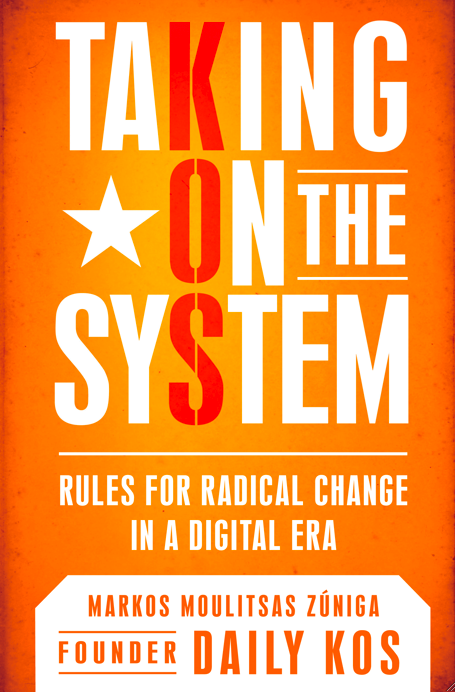 How is blogging changing the landscape of activism today? How does it translate into action and how does "Taking on the System" address that?

Taking on the System is not a book about blogging. It inevitably discusses that because it's a tool among many that activists now have to use. It used to be certain elites would have a monopoly on discussing those issues, whether it's politics, culture, music, art, etc. What's happening is technology is allowing people all over the country (and the world) to discuss the things they care about. Once they start talking about those things, a lot of times, they will act on those issues. The book talks about how technology has democratized the ability of people to gather around the issues they care about and work for change. Blogging is a tool. But so is YouTube, Facebook, MySpace, e-mail lists, etc. It's a way to grow networks and reach out beyond your geographic space. Like if you were in Chicago, you'd basically be stuck in Chicago politics or limited to a ballot in your own precinct. Now people in Alaska can get excited about a senate race in Oklahoma and vice-versa. They can send money, do virtual phone banking, etc. There's a lot of things they can do to get involved and work on the issues that excite them.

Critics often say blogging is chipping away at the power of community and activism. Do you believe it's replacing the current means of activism or is it adding to it?

Well as you read in the book, I'm a critic of traditional protests. I think an effective modern activism campaign requires a strong media component, because if you do something and nobody hears about it, you've basically wasted your time. What you want to do is maximize the number of people that find out about your action and use that attention to bring people over to your side. In the book, I talk about street protests that didn't work. It's not that the tactic is bad, it's the way it's traditionally been done. "Let's all get together and make a lot of noise! Yay! Free Mumia!" That is absolutely useless. It's almost counterproductive. So you have to have a media strategy, and blogs are a medium. It's one way to get the message out and what I talk about in the book is you work your way up the media hierarchy. If you are effective and your activities are compelling enough, they will jump over into traditional media outlets. One excellent example was Cindy Sheehan. Her protest in Crawford, Texas, began as a blog and e-mail list phenomenon. It worked its way up the ladder. MoveOn started promoting it and then it jumped over to radio, television, and newspapers. It became a huge national sensation. It almost certainly had a huge affect on the national sentiment on the war in Iraq. But then it started to disintegrate. More causes showed up in Crawford to get their own media attention. Sheehan also began marching in traditional protests, demanding attention, visiting Hugo Chavez, etc. It all fell apart at that point. But that initial strategy was very much effective. I don't think she would have gotten as far without the blogging component. I don't think the Obama campaign would even exist if it weren't for people-powered media.

It seems the Internet is still in "the silent film" stage in terms of its potential to change society. Where will blogging and political change lead us in the future?

Ideally it would lead us to a more responsive governance. It used to be that if you weren't a part of the media elite -- the president, Congress, Washington Post, New York Times, and Wall Street Journal columnists, etc -- you were pretty much out of luck. We've seen time and time again how columnists LOVE to speak about the heartland and the average Americans. Yet these are millionaires who have lived in Washington for decades and have no clue what people are up to. So we have a medium that empowers people everywhere, they can say what they care about, and it's a lot harder for those elites to speak for everybody else. We're bypassing those elite media and political filters and given that ability, we have a more responsive government to the people not to the gatekeeper elites.

In chapter five "Feed the Backlash," you talk about the former presidential nominee, John Kerry, and how he ignored Swiftboat attacks. You write the following: "In the heat of the moment you [need to] differentiate between credible and effective threats and those that won't make a ripple in the media landscape." How do you navigate around which attacks to respond to and which ones not to respond to?

It's hard. It's one of those things that in hindsight might seem very obvious and clear. But in the moment, it doesn't. I also say that some attacks also help. There's nothing better for Keith Olberman's ratings than to have Bill O'Reilly go on one of his temper tantrums. That stuff is gold. Sometimes being attacked is good and you want to encourage more of that. People will think he/she must be important, otherwise why else would O'Reilly attack him? What we're realizing is once upon a time, it would have been a lot harder for somebody like the Swiftboat Veterans to get the word out. One of the huge components of the Swiftboat ads was that they were online and blogging-based. They spent very little money on those ads and it was pretty much was the biggest factor in John Kerry's defeat.

In the chapter, "Fight big, win small," you argue that "permanent change is created through long-term effort, with small gains leading to larger achievements." Do you think this is why the GOP has been so successful? Do most progressives not understand this is the way to win?

It's clearly one of the cruxes of the progressive movement. I think part of it has to do with the fact that it's a very fragmented movement. You have various groups thinking that their issues are the most important and the whole world should rest on their issue. They're constantly in competition against each other. You don't get that sense among anti-tax groups, gun groups, or family values folks. They work together, they're patient, and they realize it's a longterm struggle. They won't win these things overnight. You don't get that on the left. Everybody seems to think if their issue is not the number one issue on the agenda "then you're not a real progressive." It's ugly. The right understands it's very methodical. It's their ability to subsume the movement into a common whole and that's made them very powerful. I write about unions and how they once took that approach. Now it's different. Hopefully it will change. We are a much broader coalition then they are. They're basically a white, male southern party. It's a lot easier to keep people in line if that's your base. With the left, it's basically everybody else at this point.