How activists are using coalitions to promote LGBTI rights in Uganda.

The kuchu movement is abuzz in Uganda. Kuchu is a word (plural: kuchus), apparently of Swahili origin, that lesbian, gay, bisexual, transgender, and intersex (LGBTI) Ugandans have minted to describe their identities. "We do not use the word 'queer,'" explains Frank Mugisha, chairman of Sexual Minorities Uganda, an umbrella entity that brings together LGBTI organizations for advocacy purposes. "We've got our own word that encompasses the whole idea: kuchu."

Despite a penal code that criminalizes homosexual acts with penalties of upwards of 10 years of imprisonment, Uganda has witnessed an astounding flowering of kuchu organizations in recent years. Each cluster is structured differently: some exist primarily as online discussion fora while others run legal aid clinics or provide health services to sexual minorities. Some meet in bars and members' living rooms while others maintain offices with laptop computers and Wi-Fi internet connections. Taken together, they represent a richly diverse community and a potent symbol of how far Uganda's LGBTI movement has come in a short time period. "We are out talking," says Kasha Jacqueline, the executive director of Freedom and Roam Uganda (FARUG), an association dedicated to empowering lesbian women. Some activists note that one reason that kuchus are able to speak out is that Ugandan law allows only for the arrest of homosexual acts, not for LGBTI identities. "We want to talk about these things. It's our resilience that is making all of this happen." 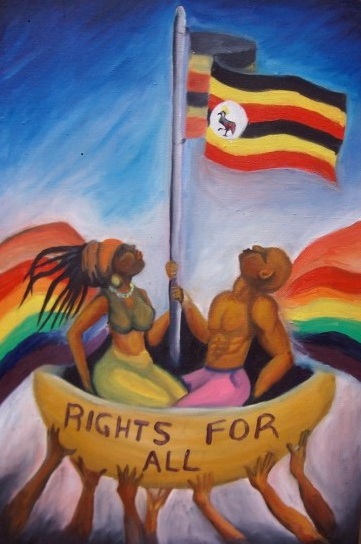 Uganda's embryonic LGBTI movement could hardly have been prepared, however, for the onslaught of activity that would result from the introduction of an Anti-Homosexuality Bill in Ugandan Parliament last year. "The last six months have been chaotic," writes Val Kalende, the manager of programs and communications for FARUG, in an e-mail, further explaining that most organizations were forced to slow down their other day-to-day activities to focus on fighting the bill. The proposed bill calls for the death penalty for cases of the newly concocted crime of "aggravated homosexuality," criminalizes advocacy on behalf of gay people, and would require third parties (including family members) to report known homosexuals within twenty-hour hours.

The bill has garnered significant media attention in the West both for its connections to the American religious right (the subject of at least two documentaries) and the threat of donor governments to withdraw their aid to Uganda if the bill were to pass. Most American evangelical churches have distanced themselves from a bill that the Swedish government called "appalling" and President Obama deemed "odious," but others like Canyon Ridge Christian Church in Nevada remain steadfast supporters of those who promote the bill.

Whatever else it did, the bill provided the nebulous LGBTI movement in Uganda with a common enemy, and the myriad organizations that were just beginning to take shape recognized the need to come together to kill the bill. "When the bill was introduced, there was a need to reach out to other human rights groups, not to take a back seat" says Mugisha. Kalende explains that, "Everyone got on the telephone and called the head of an organization they knew asking them to join the coalition and sign our first press statement condemning the bill. In just a week, we had registered 21 organizations, including those we thought would never support LGBT rights." Thus was born the Civil Society Coalition on Human Rights and Constitutional Law, or simply, "the Coalition." In addition to fighting the bill, the Coalition aims to strengthen the capacity of LGBTI organizations throughout the country.

Today, the Coalition boasts 32 confirmed members, says Coalition coordinator Adrian Jjuuko. Member organizations of the Coalition run the gamut, including HIV/AIDS-focused organizations, labor associations, women's rights non-profits, and refugee and prisoner rights groups. Some women's rights groups turned a cold shoulder to the invitation to join the Coalition, but Kasha stresses the importance of continuing to extend a welcoming hand. "We should continue building links even if we are not very welcome there," says Jacqueline. "We are women, and we should not only talk about issues that concern only lesbians but also other women. They need to know that we feel the pain." Mugisha notes that two years ago, no other civil society organizations were willing to join hands with the LGBTI movement, so he sees the creation of this Coalition as a major achievement in and of itself.

Swarming together as a Coalition has clear advantages, say activists. "Working with these networks has given us a lot more power as a movement," says Mugisha. "We speak out as one, but we are able to advocate in a number of ways. We can pursue quiet advocacy to with a number of different policymakers and organizations through a variety of channels." Jjuuko explains that the Coalition has also helped to broaden the base of support for the LGBTI movement. He explains, "Since other organizations have joined forces with this movement, others do not say, 'Oh it is just the LGBTI organizations making noise again.'" Jacqueline adds that working in a coalition gives the movement "a bigger space for our struggle."

But of course, this network-based approach contains inherent challenges. "As in many young coalitions elsewhere," says one respondent, "the struggle for power is still at hand. Everyone wants to be at the top, and we forget Rome was not built in one day." Beyond what seem to be relatively minor leadership tussles, however, larger challenges loom. The security situation for kuchu people - who by their own accounts are regularly subjected to blackmail by police officers, public harassment and assault, and imprisonment -- represents a daunting context in which to seek to expand membership. Some organizations of the Coalition have already been visited by "infiltrators" from the anti-LGBTI movement. "It's hard for us," says Jacqueline. "You can't really do a triage. We have had security training for our members, but otherwise, it is a risk that we have to accept to live with." Finally, the large-scale visibility that the Coalition has been able to mobilize around the bill has brought with it increased visibility for the services available for the LGBTI community, which are too meager to cope with the demand. "Positive and negative media campaigns have wooed many LGBTI members who were in the closet to come and seek our services," says Moses Mulindwa, public relations officer for Spectrum Uganda Initiatives, a health and HIV/AIDS-focused service organization, "[but] we have limited capacity to handle [these new cases]."

There is little indication what will happen next. A cabinet committee tasked with reviewing the proposed bill recently recommended that the law be scrapped, suggesting that most of the law's provisions were already adequately covered by the country's draconian penal code. Whether or not the bill will rear its head again, Uganda's legal and public opinion environment will still prove extremely challenging to the kuchu community there, and retaining cohesion will surely be a challenge, says Jjuuko. Be that as it may, Uganda's kuchus have proven that they can coalesce with astonishing speed and power to protect their collective wellbeing and advance their goals. "If we put the movement first before ourselves," writes Kalende, "we will achieve much more." This article is the second in a series profiling organizations and individuals in sub-Saharan Africa promoting the rights of sexual minorities. The first article in the series profiled the work of a pioneering agency in Malawi, and the next article will cover a West African setting.

Links to Websites of Key Organizations working to Promote LGBTI/Kuchu Rights in Uganda • Civil Society Coalition on Human Rights and Constitutional Law - Ugandan coalition of organizations formed to campaign against the Anti-Homosexuality Bill. Interested readers can sign their petition here. The Coalition is housed within the Refugee Law Project, a program affiliated with the law faculty at Makerere University, Uganda's largest university, to protect and promote human rights for asylum seekers, refugees, deportees, and internally displaced persons. • Freedom and Roam Uganda (FARUG) - association dedicated to empowering lesbian women in Uganda, including a recently completed Leadership Training Institute. FARUG's Facebook Page is at Friends of FARUG. • Sexual Minorities Uganda - coalition bringing together LGBTI organizations for advocacy purposes. Two current constituent members are Icebreakers Uganda, a support organization with chapters throughout the country (Facebook page here), and Integrity Uganda, the country branch of an international religious organization whose mission is "to be a witness of God's inclusive love to the Episcopal Church and the lesbian, gay, bisexual, and transgender community." • Support Initiative for People with Atypical Sex Development - support and public outreach organization for Uganda's intersex community. • Pride Alliance Uganda International - Canada-based community support group for LGBTI Ugandans living in Canada and for those seeking resettlement or asylum. • Spectrum Uganda Initiatives - Rights-based organization that focuses largely on health and HIV/AIDS prevention and treatment for the LGBTI community.