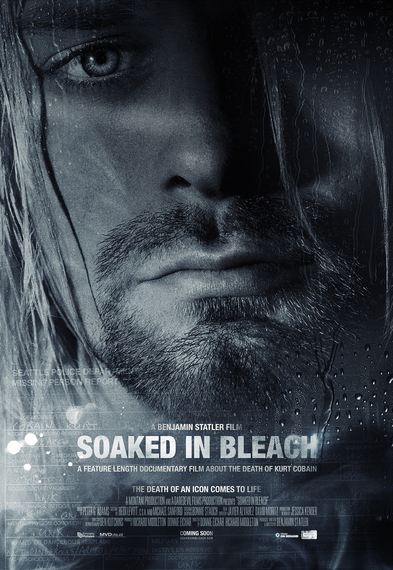 I grew up in Seattle. I experienced the same rainy, dreary weather, sometimes for 20 to 30 days straight, that is often cited as the reason why our music became grunge music in the soggy, moss-covered environs of the Pacific Northwest. We were stuck inside. Grey. Dark. Gloomy. Depressing. People said, "But of course you would come up with grunge music!" This, as the narrative goes, then led to the grungification of the rest of the planet.

All because of this participatory precipitation?

Talk about a load of Ballard BS! A Muckleshoot of Misperception I say! (sorry, local references)

Sure, you couldn't always go outside, but how many bands in warm weather regions actually practiced outside? I've traveled the world and I can tell you there are many misperceptions about the great northwest -- the people, the climate and the music. Some are easy to refute, such as, "Good God, it always rains in Seattle!" Well, it rains more annually in New York City and Atlanta than Seattle, so take that!

Others are not so easy to refute.

Many have tried for years to refute, to disprove the Seattle Police Department's official cause of death. Many believe Cobain did not commit suicide and was, in fact, murdered. There are nearly as many theories as to what happened to Cobain as there are rainy days in the Emerald City.

So numerous are these theories that they often become a downpour of information, where individual droplets, of both fact and fiction, rain down into one big, murky puddle of what I call faction (clearly not your traditional faction definition). Fact and fiction have become indistinguishable from each other.

Some of these factions have come in the form of movies, both documentary and scripted. I've seen nearly all of them. Some of are the definition of faction and others, while earnest, miss the mark.

That's because I just finished watching Benjamin Statler's documentary, Soaked In Bleach, for the second time in as many days. Yes, twice.

I don't want to sit here in my New York City hotel room and tell you all the reasons why Soaked In Bleach works so well, because I'd rather you watch it and experience it for yourself. I'm not a fan of reviews that exhaustively tell you everything about a movie. (Look, I didn't even want to know the sex of my children before they were born. There are too few real surprises in life anymore.)

But I will say a few things why I believe this documentary works where most have failed.

First, Statler does something very well that I usually do not like at all in a documentary: re-enactments. They often take me right out of the narrative, they are poorly acted and just seem like bad movie-making 101.

In fact, the director starts off the movie with a re-enactment. I have to be honest, I thought to myself, "For the love of God, really?"

However, Statler handles it brilliantly.

The director intersperses re-enactments with the real audio recordings from back-in-the-day and marries it to the scene we are watching on the screen. So, you will hear the real audio from those tape recordings, noted by a small text on the screen of who is speaking and then that character will come into view on screen and he/she will be saying those same words, but it's not the actors voice at first. He's dubbed the real recording over the actor's voice and then blends out the old recording to bring in the actors voice. It's a great way to add authenticity to the scene as a tangible, factual reference and not take us out of the documentary feel. The film feels like a documentary, but with feature-film qualities. I actually found myself looking forward to those re-enactment scenes.

"We knew we had the straight documentary," Statler told me recently, "And we had the context of the story in real time from Tom Grant's recordings."

Tom Grant is the private investigator hired by Cobain's wife, Courtney Love. Love hired Grant to find her husband because she assumed he was missing. Cobain had been in rehab and had left the facility without contacting her. Grant has hours and hours of audio recordings of in-person conversations as well as phone conversations with nearly everyone involved with Kurt and Courtney during the time period leading up to and after the death of Kurt. It provides for a fascinating narrative.

Grant is a lightening rod, not only in the film, but in real life to this very day in his relentless pursuit to get fundamental questions answered regarding Kurt's death. Grant's taken a public beating for this for years, but continues to soldier on.

And what may finally vindicate Grant just a bit is what Statler has been able to do in this film - get some of the actual players surrounding the death of Kurt to speak on camera, some for the first time ever.

From paramedic John Fisk, the first responder on the scene with the Seattle Fire Department describing what he witnessed to Norm Stamper, Seattle Chief of Police on the day Kurt was killed stating there were, indeed, investigative mistakes, these first person accounts add chilling, factual insight.

"We should have, in fact, taken steps to study patterns involved in the behavior of key individuals who had a motive to see Kurt Cobain dead," says Stamper in the film.

The second time they are talking about is re-opening the investigation. In fact, director Statler has enlisted some of the top forensic scientists and homicide experts to study the facts of the case and they all, unequivocally, call for the case to be re-opened.

"Having world-renowned experts back up Tom Grant's investigation," said Statler, "and calling for a re-opening of the case based on the fact of the Seattle Police Department's flawed investigation is key to this film's authenticity."

I asked Statler why this documentary? Why now? What is his motivation?

"I'm not motivated by punishment," Statler said. "It is unbearable to me that there is this acceptance of Cobain's suicide despite this mountain of evidence out there that doesn't add up"

Statler and every expert point to one small item, on just one line, on the police report from the day Kurt's body was found. That item turned out to be, in their words, the biggest mistake of the case.

What is it? You'll just have to watch Soaked In Bleach. Maybe even twice.