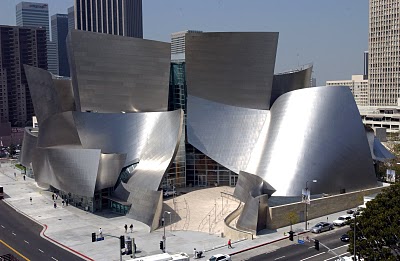 Bach, Mozart, and Beethoven on the LA Phil's marquee?

But wait a minute. This weekend's fare proved something of a deceptive cadence. To begin, we were not talking of "Bach" as in the ubiquitous Johann Sebastian, but rather of his son, Carl Philipp Emmanuel. And while Mozart and Beethoven are over-exposed, their works here were anything but hackneyed. -- (Photo above of Disney Concert Hall courtesy of the LA Philharmonic.)

Selections from an infrequently performed ballet by Beethoven on the Prometheus myth capped a program that had begun with a rarely heard concerto of C.P.E. Bach and a Mozart concert aria featuring mezzo-soprano Susan Graham, with frequent LA Phil guest Christian Zacharias conducting and doubling as pianist in the latter two. The Casual Fridays program I took in was a slightly shortened version of those to follow over the weekend.

The younger Bach was a curious, quirky fellow. As the most talented and exploratory of Sebastian's many children, he followed his own path, sometimes to his father's annoyance. Yet he would, during his lifetime, become better recognized, rewarded, and emulated than his father (as performer, composer, and the author of a treatise on keyboard performance), remaining influential for decades after his death in 1788.

Where Sebastian had been the great summarizer of the Baroque era, Emmanuel looked forward in his art, as a major proponent of a style that would depict emotional fluidity within a musical composition, in contrast to the singular "affect" of a Baroque movement.

Known as the Empfindsamer Stil (Sensitive Style), the trend would anticipate the later Sturm und Drang (Storm and Stress), initially a literary and later a musical style best known in C.P.E. Bach's late keyboard works and the symphonies of middle-period Haydn. The new style would pave the way for the Classical sonata form that flowered with the mature Haydn and his younger contemporaries, Mozart and Beethoven.

These trends were evident in embryonic stages in Emmanuel Bach's Concerto in D minor for Keyboard and Strings, Wq.23, composed at age 34 in 1748, two years before his father's death. As might be expected, it is a transitional piece. Call it a "missing link" between the Baroque and Classical styles.

Like C.P.E. Bach's later keyboard music, this concerto is characterized, in its two outer movements, by rapidly pivoting thrusts and parries, some of them stopping on a dime as if in a cul-de-sac, commencing again with another motif. Dynamic contrasts, harmonic instability, an extensive minor mode in the first movement, and unexpected emotional outbursts in all of them jar equanimity. No wonder young Bach's music gave his father pause. He was on to something. (Maybe just ON something?)

Emmanuel Bach's quick flashes of musical temper anticipate Beethoven, or, in a more jovial mood, Haydn's playful surprises. There is also something proto-Brucknerian in those mid-phrase cul-de-sacs. This Bach was feeling his way into a sensibility that challenged the perfection of Enlightenment bromides, searching deeper into human psychology and discovering contradictions that can burst forth unwillingly in the middle of the most rational of arguments. (Tea Party antics, anyone?)

Zacharias had the concerto firmly in his flexible fingers, with a crisp touch and a free use of dynamics that modernized musical lines but remained true to their expressive intent. His piano's lid was removed but its tone balanced with the vibrato-less string forces in sharply defined, contrasting phrases. The nearly inaudible harpsichord continuo (against the sonorities of Zacharias' pearly modern Steinway) played homage to convention, but was unnecessary here except for purists. The slow middle movement's aria-like melody was forward-looking, having a Mozartian grace in its descending paired-note sighs, nicely brought off between piano and strings.

Talk about feelings. Mozart's great concert aria, Ch'io mi scordi di te? (You ask that I forget you?), K. 505, is a "declaration of love in music," according to Alfred Einstein. Resurrected from an earlier insertion into the opera Idomeneo, it was tailored for a star mezzo-soprano of the time, Nancy Storace, who was departing Vienna in 1787, and may have been carrying on a love affair with the composer.

The text is full of amorous frisson, with musical clues as supporting evidence. Two soloists, a coloratura mezzo-soprano and a vigorously interacting piano, carry on like shameless lovers in the presence of the soft-pillowed orchestra, with Mozart deploying two of his beloved clarinets in entwining phrases with the sultry bassoons. It was all gorgeously realized in the seamless velvet of Susan Graham's emotive coloratura, complemented by Zacharias's seductive, singing piano.

As if the climate was not warm enough, Zacharias concluded with a selection of eight of the eighteen purely orchestral numbers from Beethoven's second ballet, The Creatures of Prometheus, op. 43, composed in 1800-01. (You read correctly; the juvenile Ritterballett was the first, composed a decade earlier in Bonn.) Prometheus was, of course, the Greek titan who stole fire from Zeus and gave it to mortals, an irresistible subject for the titanic Beethoven, who was to shake his own musical heavens shortly thereafter.

One can hear the flickering flames depicted in the oft-performed and thoroughly charming overture, far and away the most developed movement in the score. But there are also other sections of interest. One of the adagios has the sole appearance in Beethoven's oeuvre of a harp, used quite idiomatically. The work's finale provides the second outing for a tune Beethoven was to employ four times, starting with an orchestra contredanse. Its peroration would come in its varied treatment for the Finale of the heaven shaking Eroica Symphony of 1803.

Additional colorations of trumpets, flutes, oboes and four timpani (added to those used in the earlier works), not to mention a lovely basset horn solo from Michele Zukovsky, helped sustain interest in the pleasant but repetitive score, designed as it was for the formal patterns of dance. The orchestra mustered a reasonably committed performance, an intonation problem here or there noted, as from the solo cello taking Casual Fridays too much to heart on this occasion.

The earlier Upbeat Live lecture from pianist-conductor Lucinda Carver provided an informed and witty introduction to the program, with a number of interesting anecdotes. Here's one I particularly liked, from an unidentified source. It seems the towering technique and rigidity of Johann Sebastian Bach could have stifled the creativity of his children, many of whom were to become musicians. Of necessity, according to one wag, they "scattered like billiard balls escaping their triangular foundation."

That's how it looked Friday evening as the audience departed the triangular Disney Concert Hall, with the prospect of even more phantom flickers on Halloween Sunday.