On the rooftop of the American Psychological Association's office building in Washington, D.C., meditation teacher Klia Bassing leads class participants on a walk around a stone labyrinth. The labyrinth, which was installed as part of the building's environmental green roof, is one of several in the Washington, D.C. metropolitan area which will be featured in my new documentary, Labyrinth Journeys. The film, currently in production, will capture the stories of the people who use labyrinths in several different settings, and will explore the effect this circular pathway has on their lives. Labyrinth Journeys will also trace the history of this ancient structure and symbol, which is still relevant and widely used today.

For over 25 years, I have explored facets of the Washington, D.C. area community through my films: from young Salvadoran immigrants struggling to make a new life in the United States, to the people who have a personal connection to Glen Echo Park's antique Dentzel carousel, to a diverse group of gardeners who work side by side growing vegetables, fruits, and flowers in D.C.'s community gardens. Labyrinth Journeys reflects my interest in bringing to light spaces that provide individuals with healing, respite, renewal and a connection to nature.

Unlike a maze, which has many pathways and dead ends, a labyrinth has a single path which leads to the center and back out again. Labyrinths are often painted on canvas, built of stone, cut into turf, created from natural materials, or laid onto an existing surface.

The labyrinth has existed for over 4,000 years. The earliest labyrinths appeared in Neolithic rock carvings in southern Europe, on coins from Knossos, Crete around 300 B.C., and on mosaic floors during the Roman Empire. In the Middle Ages, labyrinths that were large enough to walk on were constructed on the floors of cathedrals and used by Christians who could not make the pilgrimage to Jerusalem.

Today, labyrinths can be found in hospitals, schools, churches, office buildings, public parks and gardens, correctional facilities, retreats, and private homes. The Washington, D.C. area is home to several labyrinths. Among them are five that will be featured in Labyrinth Journeys. 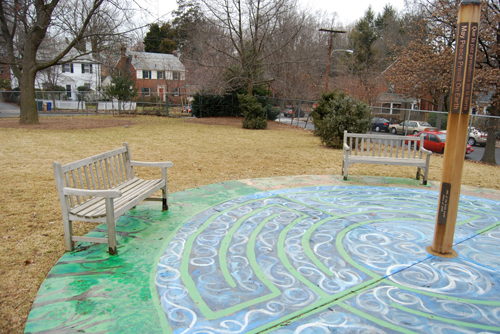 At Murch Elementary School in Northwest Washington, D.C., a "peace pole" stands at the center of the school's brightly painted outdoor labyrinth. The school's peer mediators, identified by their blue caps, use the labyrinth and the peace pole to mediate their classmates' conflicts during recess. Teachers sometimes take their classes to the labyrinth during the school day. Parent Lisa Lavelle Burke says that children often play, run and ride their scooters on the labyrinth.

The Washington National Cathedral hosts monthly walks on a canvas labyrinth to the accompaniment of a harpist as part of its Cathedral Crossroads program. Terri Lynn Simpson, who coordinates this evening program of contemplation, says, "Some people walk as part of their regular spiritual practice. Others come when they have an issue they're struggling with and are seeking guidance or clarity." She says the labyrinth is also popular with school groups studying the Middle Ages, co-workers who want to celebrate a colleague's new job or retirement, and cancer survivor and support groups. Simpson adds that many couples walk the labyrinth as part of their "date nights," noting that an engagement took place a few years ago on the labyrinth.

For veterans returning from Afghanistan and Iraq, a walk on a labyrinth can help heal the physical and psychological wounds of war. At the Walter Reed National Military Medical Center in Bethesda, Maryland, two labyrinths are used by patients and staff members. The striking outdoor labyrinth in the Angel Garden is designed with red and gray concrete paving blocks. At the National Intrepid Center of Excellence, which treats veterans suffering from post-traumatic stress disorder and traumatic brain injuries, the labyrinth sits at the center of a skylit atrium known as "Central Park," which features plants, nature sounds, and walking paths around the perimeter. 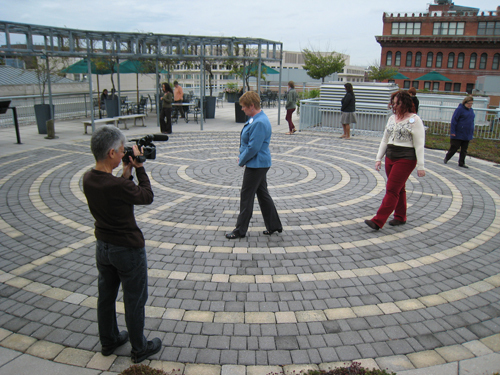 The sounds of city traffic grow more faint as one enters the American Psychological Association's (APA) rooftop labyrinth. Located a few blocks from the U.S. Capitol, the labyrinth is a peaceful oasis for office workers. Holly Siprelle, the APA's assistant executive director for staff initiatives, says, "We felt it was important to have the labyrinth on the roof to provide people with the opportunity for contemplation... an opportunity to relax and renew." Labyrinth walker Susan Hillson adds, "Every time I walk it, I experience something totally different. Sometimes I'm working out a problem that I've encountered with someone at work. I may be working with a software system that's uncooperative. Or I may be working out something very, very personal." 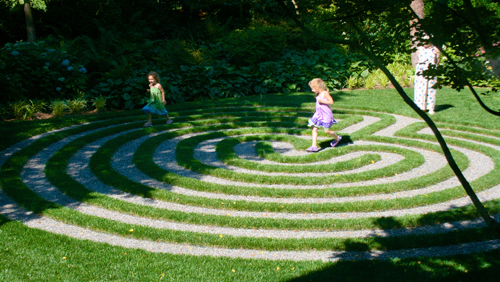 When Vickie Baily and her husband Martin bought their 19th century home in Garrett Park, Maryland, they needed to change the grade in their yard to prevent water from leaking into the basement. After leveling the ground, they decided to build a labyrinth on their lawn to share with the local community. Baily says, "Whenever I see people looking at the labyrinth, I invite them to walk it any time they wish. When I see that people have come to walk, I try to work in a different part of the garden, or go into the house, in order to give them privacy." She has been pleasantly surprised by how much children enjoy playing in the labyrinth, especially on Halloween, when it is a favorite destination for trick-or-treaters.

Each of these labyrinths is unique in its setting and in the individuals it serves. Labyrinth Journeys will focus on the personal stories of the people who are drawn to this archetypal symbol and will show the powerful effect the labyrinth has on their lives.

As an independent filmmaker, I will be raising funds to help with the production of the documentary. I hope to share the completed film with audience members and viewers in late 2014.