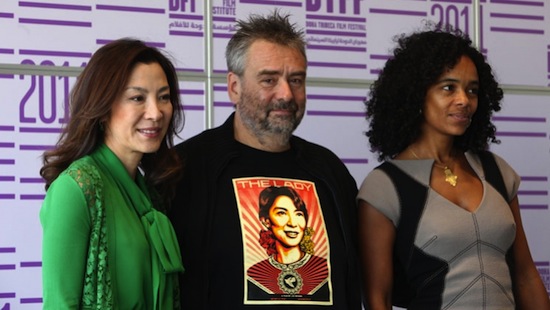 "You can't separate peace from freedom because no one can be at peace unless he has his freedom." -- Malcolm X

The elections in Myanmar have come and gone, with Aung San Suu Kyi's long banned National League for Democracy (NLD) claiming victories in 43 of the 45 parliamentary seats that were up for grabs. Yet only time will tell if the country better known as Burma will actually uphold the vote of the people, or experience a deja-vu of the 1990 general election. Then too the NLD won 59 percent of the popular vote and claimed 81 percent of the seats in Parliament -- thanks to the campaigning and popularity of the woman affectionately known in Burma as "The Lady" -- but the military powers placed Suu Kyi under house arrest, where she remained for close to 15 years.

This month, an exceptional film about Suu Kyi and her struggles, directed by Luc Besson and titled The Lady comes to U.S. screens. It is a film that reminded me why I love cinema so much, as an impassioned learning tool. Of course, I had heard on the news and read in newspapers multiple reports about Suu Kyi, her life, her family and her political ideas. But it wasn't until I watched Besson's film that I understood, deep within my heart, how truly exceptional this woman is, and what sacrifices her loved ones have gone through for the love of her country.

I caught up with Besson and his star Michelle Yeoh at the Doha Tribeca Film Festival, where they talked about their personal reasons for making this film, the spirit of filmmaking and how courage is a quality not exclusive to heroes.

E. Nina Rothe: Ms. Yeoh, you've said that after playing this part, you almost did not want to get out of character. Why?

Michelle Yeoh: Because Suu Kyi is an extraordinary woman. She is very inspirational, the way she is, the philosophy of compassion, her commitment to love -- to patience. If I can aspire to be just a little bit of that! While researching for the role and trying to be her for the role, you know you have to grab some of the essence. So, constantly I tried to be her, sit up straighter, be a little more... But the philosophy is something that I would very much like continue. You know there are roles that at the end, I put them back in the box, put them in the cupboard, but this is one role, because of this inspiration, that I would like to keep with me.

ENR: And you Mr. Besson, do you feel the same way, about wanting to be a better human being?

Luc Besson: Yeah, only a couple of years ago that I made the film about Joan of Arc and the entire world was declaring her a saint when in fact she was crazy. It's funny, The Lady is almost in response to the other one, because you know, she is not a saint, she doesn't want to be a saint, she's not declared as a saint but she is a goddess, because she is the almost perfect definition of what it is to be a good human being. What she is defending, she doesn't ask for anything... I NEED that, I need this reference, I need a couple of people like this so at least I know where I am going. You know, no one of us will be as good as her but at least you know which way to go, because that's the good way. Sometimes you can calm yourself because you can say "no, no, she's here..."

ENR: You compared Suu Kyi to Gandhi, but do you think those kinds of heroes have a different emotional make-up from us, ordinary people?

Luc Besson: NO and that's the point, I think they are exactly like us. I think it's the society that drains us out, and we are in a society where we are driven by money. You know, money will never save anyone. Compassion can save someone, love can save someone, money will never save anyone. And as long as the entire society will put money first... Money should be like third or fourth or fifth, I'm not saying lets get rid of money, but how can we put money as number one? As the only value, like if you are rich, you're famous you go VIP, why? It's just insane, the way we've transformed the society. ENR: Has Suu Kyi seen the film?

Luc Besson: No way, how can she see it? We can't go to show her and the Internet is locked there. I guess she will see it, one day or another... But she's not in a hurry to watch the film.

Michelle Yeoh: But think about it, it takes place in a very specific period when she left her family at Oxford, never could return not even once, then afterward it was this journey where she was under house arrest. It was a lot of joy but then a lot of grief, a lot of sadness when the husband was ill, and if you think about it she never really saw it. But to see our interpretation of all this, we lived these many years in a short period of time and when we watch the film, I'm still in tears. So I can't imagine what she would feel like to try, I really can't.

Luc Besson: You know, the actor who plays her dad in the film, in 1947, he looks exactly like her dad, he's like a twin, so she is going to be very affected by that. The house where she lived in Oxford, we shot in the house. The building, number 15 it's where she lived. I rang the door of the guy and I said "she was there in your apartment, do you mind if I do a couple of shots" and the guy was nice and said yes. The hospital that you see in the film with the snow, is where her husband died, it's the building of the real hospital. And she knows this hospital because it's in Oxford. So when she's going to watch it for her it would be a nightmare. And she knows it, that we went very close to the truth. She told us "I will see the film when I'm courageous enough" but the film, is not for her the film. The film is gonna hurt her for sure. It's going to be painful. We said, take your time, one day...

ENR: Ms. Yeoh, you got the script first and brought it Mr. Besson. Why him?

Michelle Yeoh: WHY? I was very blessed, after the script was written by Rebecca Frayn and Andy Harries, her husband was the producer, they sent it to me, I read it and I was just blown away. You know how instinctively you know this doesn't come all the time, it's like a little miracle. I knew I had to do this film but it was also important how to do it. So I met with Rebecca, we talked about it with Andy. In my mind the director is the soul of the film, he's really the one who understands and puts everyone together. As actors, you know a lot of the times we're very selfish, it's about ME, always me first. Luc was someone that I'd wanted to work with since the beginning. I've never seen him as... you know some people say he's an action director, instead I've seen him as an incredible director that's driven by commitment and love. But when I first went to him it was as a mentor or as a producer, to see if it was possible to make a film about someone who is very much alive, someone that you can't get or be in touch with, whether it could be realized and I gave him the script. And then he read it, cried, fell in love with it and said to me "I think I should be the director"... And I was like "WHAT? Can you just say that one more time??"

ENR: Apart from her importance as a woman and as a hero, the film is also really momentous, it talks about students beginning a revolution, about changing the world one person at a time. Did you know the film was going to be so important for this moment?

Luc Besson: No, because we started more than two years ago.

Michelle Yeoh: At that time there was no Arab Spring. At that time Suu Kyi was still under house arrest. No, we did not know.

ENR: How do you feel about it being such a perfect representation of the present times?

Michelle Yeoh: Wow, that's a nice way to put it!

Luc Besson: I think that all of us, we sometimes feel it, we are living in countries where we have freedom, so we don't suffer about it, but we feel it. I have been to Tunisia and all these countries since I was 10 years old and you feel it here and there. You know you have these great hotels and then you go 100 meters and they don't have water... You're like, that's strange, it's not my country, no alright. But I'm not going to come back here for my holidays, for sure, because I don't feel good participating in this situation. But it's not up to you to declare it, it's up to them to suddenly say, we're going to take the street and we're going to take our country. But I guess that we smell it, even if we can't put words to it. So, when we took on the project two years ago, I think subconsciously it played into our decision that we have to tell this story. We didn't know why but we had to tell it.