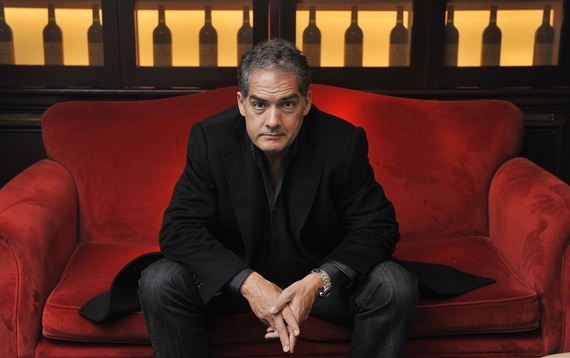 Philip Kerr obtained a master's degree in law and philosophy from the University of Birmingham in the UK. He worked as an advertising copywriter for Saatchi and Saatchi before becoming a full-time writer in 1989. He is best known for the Bernie Gunther series of historical thrillers set in Germany during the 1930s, World War II, and the Cold War. He was a finalist for the Edgar Award, the Shamus Award, and winner of the British Crime Writers Association Ellis Peters Award for Best Historical Crime Fiction. He has also written a Young Adult series, Children of the Lamp, under the name P.B. Kerr.

In The Lady From Zagreb, the tenth book in the Gunther series, Bernie--a former homicide detective totally unsympathetic to the Nazi regime--finds himself at the height of the war, forced to run errands for the notorious Joseph Goebbels, the Minister of Propaganda. Bernie is tasked to convince Darla Dresner, a beautiful young actress living in Switzerland, to return to Germany to star in a propaganda film. But it becomes personal: Bernie falls deeply in love with her.

The mission takes Bernie from Berlin to Zurich, then to Zagreb and the brutal killing fields of Croatia. Events become complicated, and Bernie realizes he's fallen into a viper's nest of intrigue and betrayal. The brutal operatives of Allen Dulles and various other nefarious political operatives lie in wait.

In The Lady From Zagreb, and the entire series, you've created an extraordinarily likable character in Bernie Gunther. Given his circumstances, this seems difficult to have achieved. How would you describe his personality?
Like me, he's temperamentally unemployable. He's good at his job and he's sort of tolerated by the Nazis. You didn't have to be a Nazi in order for them to find a use for you. He's a romantic figure; someone who loves his country but despairs that it's been high-jacked by a bunch of gangsters. He wonders what he can do about it. He doesn't always behave heroically. Part of what redeems him is he doesn't let himself off the hook insofar as guilt is concerned. He has a dark and razor sharp sense of humor, which is how Berliners were depicted in the film Cabaret and by Joel Grey's character as Master of Ceremonies.

You've just encapsulated his personality very well.
I've been with Bernie for a long time. I wrote the first book nearly thirty years ago. If you told me then I'd be promoting him in 2015, I'd be quite surprised.

How has Bernie Gunther evolved over these thirty years?
In the beginning, he was younger and a bit more muscular. He got the girls rather more readily than he does now. He's older, wiser, and more grizzled. He thinks more about things now, and moves around. In one novel, he goes to South America where he meets some of the war criminals who relocated there after the war ended. He changes, I think, quite radically, over the years. The basic character structure is still there, but so many things happened during the war, and he changed as things progressed.

Your Author's Notes describe a Swiss plan to forestall an invasion by Hitler, who, as you wrote, was still considering such an invasion as late as 1944. Tell us about that.
The Swiss were surrounded by hostile forces: Italy, the Vichy government in France, and the Nazis. The Swiss realized they would have to step very carefully to avoid being invaded. Hitler knew if he had Switzerland, he could control the mountain passes leading to Italy. He realized the Allies were planning attacks up through the boot of Italy.

The Bernie Gunther novels are suffused with morally hazy issues. Bernie navigates his way through them with aplomb. Will you talk about that?
I don't really like heroes who always behave heroically. That's not interesting to me. So, I put Bernie in situations where the choices to be made are difficult ones. For instance, in a previous book, a soldier threatened to reveal the existence of a high-level Wehrmacht plot to assassinate Hitler. Because Bernie could see no alternative to preventing this man from disclosing the plot, he ends up murdering him. The war created its own imperatives. I try imagining what I'd have done in a similar situation. It's a more interesting question if you take it one step removed: if you had an opportunity to kill someone who would interrupt a plot to kill Hitler, what would you do? It makes Bernie more interesting.

And far more of a complex character, as well.
Yes, there was a big fan of Bernie's who couldn't believe Bernie could kill someone in cold blood. I asked him what he would have done if he believed this man was going to spoil a plot to kill Hitler. He had to admit he might have done the same thing.

In an interview about the novel, you revealed quite a surprise about Joseph Goebbels. Tell us about it.
The Nazi leadership was often well-educated. Goebbels had a doctorate from Heidelberg University. When he was a struggling young man, he wanted to be a novelist. He wrote a novel called Michael. Like most young novelists, he was unsuccessful in getting it published, as, by the way, I was with my first few novels. When he became Minister of Propaganda and was in charge of all German publications, of course the novel was published.

The first surprise to me is that people are not as interested in reading as they once were. We're witnessing the death of newspapers, and publishing may go the same way.

The writing life has changed dramatically as compared to when I first started. It used to be you published a book every few years. Now, the writer and the author are two different people. The writer stays at home; the author goes on book tours and becomes a raconteur and personality. Increasingly, the latter is required.

Now, it's not enough to just write a book. You have to become something of a celebrity-promotor of the book. It's a bit like schizophrenia because the very thing that makes you a novelist--being fond of your own company, staying home and writing--almost disqualifies you from going on the road and being articulate in front of people as you hawk your novels. There's only one thing worse than doing a book tour, and that's not being asked to do one. (Laughter).

What do you love about the writing life?
I love sitting at my desk and facing a quiet day with a pen in my hand, and putting myself into a story. It's kind of weird, isn't it? I mean, to absent myself from real life, and make up stories is strange, but I started doing this when I was ten years old. It was all I wanted to do. I just think I've been incredibly fortunate having pulled it off and not really having to hold down a job.

You mentioned holding a pen. Do you write by hand?
Yes. I write by hand and then transfer the text onto the computer. I like the process of actually having a pen in my hand. Things flow more easily for me that way.

If you weren't a writer, what would you be doing?
If I weren't a writer, I think I might have thrown myself more enthusiastically into advertising. But, it's difficult to imagine being a diligent copywriter. It would be quite exasperating for me. I did so many things. I started out as a lawyer. Then I went into advertising, and eventually drifted into journalism. There are all sorts of things I could have been doing, but perhaps like Bernie Gunther, I may be temperamentally unemployable.

You're having a dinner party. If you could invite five people over for dinner, from any walk of life, living or dead, who would they be?
I'd go for an interesting mix. I'd invite Charles Darwin. I'm struck by his enormous powers of observation. If I could have Martin Luther there, it would be very interesting to see the two of them come up against each other. Edward Gibbons would also be part of the group, and then there would be Isaac Newton. Those three--Newton, Darwin and Gibbons--would be a triumvirate of excellence not just in their specific fields, but as men of letters. It would be fun to have a woman there, too. Very possibly Hedy Lamarr who, apart from having been one of the best-looking women in the world, was the co-inventor of a gyroscopic system for guiding submarine torpedoes. It's a little-known fact that she had a brilliant mind.

What's next for Philip Kerr?
I'm writing another Young Adult novel and publishing a series of novels about soccer in Europe. I try to do new things. I can't bear doing the same thing again and again, which is a danger of doing a series. I like setting new challenges for myself.

Congratulations on writing The Lady From Zagreb, a gripping historical thriller taking the reader to another time and place, and it does so with chilling realism.