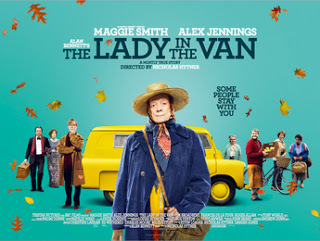 Nicholas Hytner's The Lady in the Van is a film about the making of an artwork in the guise of a story about an eccentric, traumatized old woman who'd once been a gifted artist herself. A subplot takes the form of a mystery concerning both her own gift as a concert pianist, her desire to become a nun, her institutionalization, and her mistaken belief that she was responsible for the death of a motorcyclist in a car accident. In Pygmalion Shaw dealt with the desire to fashion people in each other's images. In The Lady in the Van, the playwright Alan Bennett, who wrote both the script and the play on which the film is based, is dealing with the idea of turning real life into art. In one of the scenes the old woman Mary Shepherd (Maggie Smith) defecates in the driveway of Bennett's house, where the writer has conveniently let his subject camp out for 15 years. But in an alchemical sleigh of hand, the shit is turned into gold, as we see the author unpacking copies of the memoir on which both the play and movie would later be based. Is the artist's motive generosity or mere exploitation? Probably a little of both. Bennett himself makes a cameo appearance late in the film when the Lady is being memorialized with a plaque. The scene recalls a number of movies where the camera pulls back to reveal the guts. Throughout The Lady in the Van, Bennett further embellishes his idea by producing a doppleganger of himself who in one instance actually remonstrates him by saying, "you live life, I'll write about it." One of the problems, of course, is the fact that behind her irascible exterior, the old woman is frail and one day dies. The movie then goes on to explore what its creator does when his subject is no longer sitting in his driveway producing the feces that once fueled his work.

{This was originally posted to The Screaming Pope, Francis Levy's blog of rants and reactions to c contemporary politics, art and culture}