I'd lost my virginity less than a year before.

I was in the larva stage of my stud-dom when the world according to het males was turned upside down. The log we'd be sitting on turned out to be the tail of a very pissed off dragon. Now, I was growing up in New York City, where the shit hit the fan months, even years, earlier than most places on the planet. Perhaps guys living in the hinterlands had a few more weeks of blissful ignorance and creaking assumptions.

The impact of Feminism in those early days cannot be overstated, at least in my life. Within weeks, it seemed, every single female human being I came in contact with was seething with triumphant fury. We are Woman, hear us roar, in numbers too big to ignore.

I, and every boy-child I knew, was subjected to entirely new and massively effective ways to make us beg for it. The very idea (one that I was barely able to entertain anyway, what with my reasonably enormous teenage insecurities) that it was remotely possible to casually seduce a "chick" with a "free love" come on withered and died in front of my eyes.

Of course, there were several centuries of legitimate hell to pay, and I was, as a maturing male representative of the species, a bona fide debtor. Still am! On the other side of the human coin was half the population who'd been putting up with sexual harassment and objectification, financial inequity, societal restrictions and oppression, gross abuse, lunatic religious control, what have you... for only eons. Not to drift into con-tro-verse-ee-al waters here, but, it can't be just me that feels when you strip most religions down to their nub, they all seem to have a common goal perpetrated by the same bunch, regardless of culture; confused awestruck men trying to control women because they, the men, can't control themselves.

Am I right, all you purty ladies!

Like all major sea-change movements, Feminism had it's leaders, it's pioneers, it's visionaries, it's People Who Made A Difference. This column isn't about them there gals.

To say that boxing wasn't a place for women back then is like saying The Clash would ever shill their songs to advertisers. Sorry, what? British Airways bought "London Calling"? How much?! Oh! Okay, well, never mind that analogy then. Still, the point is... a woman in boxing in the 1970s, in any capacity, other than the bikini-clad Round Girl (spiked heels and placards included), was not just unheard of, it wasn't even a fleeting thought.

Boxing is one of those love/hate sports. I get the hate. Barbaric is apt. And yet, there's an oddly pure nobility about it, too. Me? Show me a tape of the Hagler vs. Hearns three round masterpiece, or any footage whatsoever of Ali, and I'm an edge-of-the-seat boxing freak. But, usually, I am entirely able to channel surf past a basic cable bout on a Saturday night after my wife's gone to bed. I mean, come on, Goodfellas has to be on one of these 200 stupid stations...

Quick instructive digression: I just called the April 15, 1985 fight between Marvelous Marvin Hagler (his full legal name!) vs. Tommy "The Hit Man" Hearns a masterpiece. So, if you're not sure how you feel about boxing, watch this...

If you don't find yourself breathless within 60 seconds of Hearns vs. Hagler, you probably genuinely don't like boxing.

Frankly, when a friend sent me a book by his mom (!), this woman boxing judge, well... I enjoyed looking at the pictures; lots of cool shots of weird semi-successful fighters (Boogaloo Watts, Chuck "The Bayonne Bleeder" Wepner, Willie "The Worm" Monroe -- who somehow was one of only three men to ever beat Marvelous Marvin Hagler) and some of Mom Carol with really famous famous boxers... the great Joe Frazier, who became a close personal friend, Sugar Ray, Floyd Patterson, Roberto Duran, Hagler, Ali... yep! There's Carol with that guy!

Okay, but, did I want to actually plow through a whole book about her?

Jeez, this is really just a suburban housewife here. I mean, a fun gal who can write, but...

The suburban housewife is Carol B. Polis. 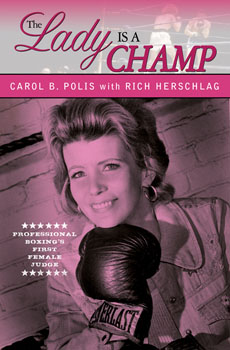 Her book is The Lady Is a Champ, published by one of them upstart start-ups, Velocity Publishing Group, a company with an eclectic outlook, for sure [next up, guitar god, Randy Rhodes!].

Anyway, this extremely down-to-earth mom voice is telling her la-dee-dah story when, about 30 pages in... The Fluke Moment.

Carol's husband at the time, Bob, was an aspiring boxing referee. Several times, he'd taken her to matches he was officiating. Boring! One night, in a moment of what feels like desperate male "problem-solving" to me, Bob taught Carol the basics of scoring a boxing match. She decides, Okay, this might be fun. Carol scored all the rounds of the main event that night on the back of the fight-night's program. At the end of the evening, she showed hubbie Bob her scorecard. He stared at it a minute or two and told her he'd be right back. Bob walked Carol's scoring over the the brand new Boxing Commissioner for the State of Pennsylvania, Zach Clayton. Mr. Clayton took a look at her numbers.

Mr Clayton walked up to Carol and said, "Mrs. Polis, I like the accuracy of these numbers better than the ones the actual judges handed me."

On December 19, 1972, I played my first ever show at the guitarist and songwriter in the rock band, The Planets. We opened for the legendary New York Dolls in the legendary Mercer Arts Center. On that very same day, Mr. Clayton gave Carol B. Polis her first fight to judge.

From this point on, The Lady Is a Champ turns into the cliche... a potato chip book. You kinda just can't stop reading.

Here's the thing... this is not really a book about boxing.

Ms. Polis does an extraordinary job of writing in a way that describes a boxing match for you in cinematic terms, with a solid dose of her insider smarts pointing out the telling details. She also does a wonderful job conveying the sweat, toil, thanklessness of the harsh realities of a boxing training gym and the kinds of people who populate them. You meet the young hopeful bright green boxers, the old Burgess Meredith trainer types, the star-struck gophers, the worn out ex-fighters who have no other world they feel comfortable in, [actual] "goodfellas," or someone like KO Becky, a 4'7" ex-vaudevillian with ponytails down to her knees who managed her boxer husband's career because no one else would.

No, what this book really is, is the story of a kinda remarkable American (this story is SO American!) gal and a very charming female-eye-for-detail period-piece.

Ms. Polis puts her life and boxing in the context of her times. When she takes a trip to New York City to appear on the ancient game show, What's My Line, I felt as though I'd been put in a time machine and was seeing, hearing, smelling my hometown as it was in the 1970s. When she's late for an important pre-fight meeting because she can't tear herself away from the televised Watergate hearings, I'm unwilling to turn off the TV either. When the hotel where she's moonlighting as the night manager turns out to be housing a militant group of Black Panther-style revolutionaries, plotting to blow up Philadelphia, you can feel the back of her neck getting clammy, when outta the blue, she's being interviewed by the FBI at the front desk.

Sprinkled throughout the book are little gems of dry mom-wit.

At one point, she's in Argentina to judge a title bout. She winds up getting what she refers to as "the Eva Peron treatment" as she, the first ever lady boxing judge, and a good looking one at that, becomes as big a story in Argentina as the match itself. Then, the match itself turns into a near nationalist riot, one of the main event boxers being an Argentinian People's Hero. In the middle of her terse crime-reporter description of the ensuing chaos from her ring-side vantage point, she drops in, "It was a good thing I'd swapped out my white dress for a red one... wouldn't show all the blood spots."

She is also wisely diplomatic regarding the pervasive corruption in the fight game. She keeps her bile to a minimum when writing about a monster-like promoter, Don King, but, it leaks out enough for you to get the drift. It's interesting to note, the only sport that is required to interact directly with state governments is also the most corrupt... that is, if we take Lance Armstrong and his very fast bicycles out of the equation for a moment.

Summary: An exceedingly normal American woman landed in a truly unconventional gig at a time in this country when upheaval was another way to describe "this afternoon." Without the benefit of her Sisters in Arms, she cruised into a uniquely male world by dint of her own talents and chutzpah. I really had no idea how much fun it would be to spend time with her for 298 pages!

You might want to get to know American Original, Carol Polis, too.

The Lady Is a Champ can be ordered through the usual suspects, Amazon, eBooks or www.velocitybooks.org.

It will make you, my pal, and his Mom, very happy.