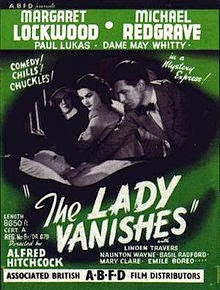 Alfred Hitchcock's The Lady Vanishes (1938) is an essay in foreign affairs, whose lessons are as applicable today as they were at the time of the film's creation. Released in the aftermath of the Anchluss, Hitler's invasion of Austria, it's Ship of Fools on a train, where the spectrum of English class and politics is deliciously rendered with Hitchcock's consummate humor and perspicacity. Charters (Basil Radford) and Caldicott (Naunton Wayne) are two cricket enthusiasts whose sole interest is to get home to find out the results of a match. Mr. Todhunter (Cecil Parker) is a pragmatist lawyer, Iris Henderson (Margaret Lockwood), an idealist aristocrat and her romantic interest Gilbert (Michael Redgrave) embody the best of British moral values and, of course, there's the secret agent, the representative of British cunning who naturally turns out to be an unprepossessing little old lady named Miss Froy (Dame May Whitty). "Don't jump over a fence if you can sit on it," is a line from the film that epitomizes Neville Chamberlain's idea of appeasement and isolation and here is his famous speech of November 30, 1938:

"The settlement of the Czechoslovakian problem, which has now been achieved is, in my view, only the prelude to a larger settlement in which all Europe may find peace. This morning I had another talk with the German Chancellor, Herr Hitler, and here is the paper which bears his name upon it as well as mine. Some of you, perhaps, have already heard what it contains but I would just like to read it to you: ' ... We regard the agreement signed last night and the Anglo-German Naval Agreement as symbolic of the desire of our two peoples never to go to war with one another again.'"

The most interesting character is actually Mr. Todhunter, literally "death seeker" who waves a while flag at the enemy even after he's been mortally wounded. Sound familiar?