Wherever she went, whether it be in a small park in India, or a hospital in Europe, inadvertently people would feel drawn to her. Not knowing anything about her, people would inquire as to who the petite Asian lady in the wheelchair was, noting they felt a special presence. In his bestselling book "The Tibetan Book of Living and Dying," her nephew, the Tibetan Buddhist teacher Sogyal Rinpoche, refers to Khandro Tsering Chödro as "the greatest woman master of our day." In her, he goes on to say, "you see very clearly what years of the deepest devotion and practice can create out of the human spirit. Her humility and beauty of heart, and the shining simplicity, modesty, and lucid, tender wisdom of her presence are honored by all Tibetans, even though she herself has tried as far as possible to remain in the background, never to push herself forward, and to live the hidden and austere life of an ancient contemplative." 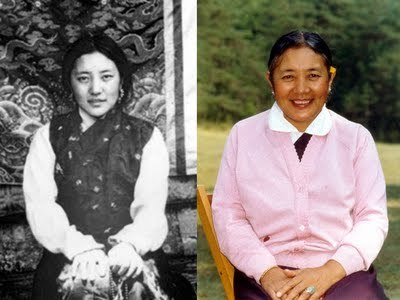 Khandro Tsering Chödron in Lhasa 1956 and in France in 1984.
Copyright: Rigpa

Khandro Tsering Chödron passed away last Monday (May 30) in France. She was one of the few Tibetans whose unusual biography could still offer a glimpse into what life in an untouched, intact Tibet had been like. Born in a small village in the mountains of Eastern Tibet around 1929, early black-and-white pictures show a beautiful, young woman standing tall but with a slightly shy gaze. Those who knew her during those years say she was gentle and reserved, but at the same time endowed with a somewhat wild, playful and independent spirit.

Her life story, populated by warriors and princesses, is so full of unexpected turns and dramatic events that it seems more like a mythical, yet sometimes cruel, fairytale. In 1949, she became the wife of Jamyang Khyentse Chökyi Lodrö (1893-1959), the most revered Tibetan master of the 20th century. Authority on all traditions and holder of all main lineages, he was the heart of the non-sectarian movement in Tibet. In Tibetan Buddhism, the consort of a great master is regarded as his equal, and thus students worldwide revered her just as they did him. Yet Khandro's happiness with Chökyi Lodrö in Tibet lasted only for six years. The year after their marriage, Chinese troops started to pile up at the borders. In 1955, just before the Chinese began to crack down on Tibetan masters and monasteries, Chökyi Lodrö and Khandro slipped out of their grip, disguised as ordinary pilgrims. Leaving almost all their possessions behind, they crossed on foot and horseback over the rugged terrain of the Himalayas. Their path took them from the high, arid plateau of Tibet, across mountain trails, glaciers and snow-bound passes into the kingdom of Sikkim. Not long after their arrival in the safety of Sikkim, Chökyi Lodrö's health deteriorated. His death was eventually to occur just after receiving news that the three great monasteries of Tibet -- Sera, Drepung and Ganden -- had been occupied by the Chinese. His remains were enshrined in a small golden structure in the Sikkimese Royal Palace. Khandro was only about 30 years old at the time, but stayed on for decades, living near the shrine, spending most of her time in prayer. "She was still very young when Khyentse Rinpoche passed away," says her friend Dagmola Sakya, herself married to the great Tibetan master Dagchen Rinpoche, "but she remained at the palace temple, and didn't want to move. It shows how strong she is, a really extraordinary human being." Khandro always insisted that there was no separation between her and Khyentse Chökyi Lodrö.

Khandro is the Tibetan word for dakini, or embodiment of feminine wisdom, and her name, Tsering Chödron, literally means "lamp of the teachings and long life." She was unanimously regarded as one of the most realized female Buddhist practitioners of our times. She was what Tibetans call a hidden master because her whole life she refused to sit on thrones and preach with words, yet taught by her sheer presence, beauty and example. Some might have mistaken her humility for lack of self-esteem. But I believe her unassuming silence goes far beyond anything that could be labeled shyness. Buddhist practice, understood in all its profundity, is not about being special, it is about being truly natural. In Tibetan Buddhism, the absence of any sense of ego is the greatest and most fundamental accomplishment. It added grace and dignity to everything Khandro did. Despite her humbleness and silence, people could not help but be moved by her sheer presence.

Occasionally, a splinter of Khandro's sharp wisdom sparked through a casual conversation. Khandro was always completely present in the moment, exhaling purity, innocence and love. Despite her status, she never put on any makeup or elaborate jewelry. Usually she wore a traditional floor-length wraparound Tibetan dress, her hip-long gray hair strung back in a knot topped with a green knitted cap above. The princess of Sikkim had knitted it for her, and Khandro was rarely seen without it. Her complete lack of vanity brought with it an immediate ease and poise when in her presence. One never felt intimidated around her -- only in awe, as if encountering a powerful, yet gentle force of nature.

For more than 30 years, Khandro lived by herself in Chökyi Lodrö's shrine room in Sikkim, before her nephew, Sogyal Rinpoche, brought her and her sister to Europe to ensure better health care. Thus, Khandro had come full circle. From living like a revered master's wife in the snow mountains of Tibet, to being a refugee in India, she finally found her home at Rigpa, one of the most influential Buddhist communities in the West. Though Khandro did not teach in a formal way, what she did say would often be so penetratingly clear that it became prophetic.

Her sense of humor was legendary. One of the first English words she picked up was "naughty girl" and she liked to use it whenever she had her own mind about something. Her caretakers admired her playful nature, and none of them ever heard her complain about all the friends and fortunes she lost in Tibet. When other Tibetans lamented the terrible loss that has befallen Tibet, she simply stood up and walked away. She passed away like a great practitioner -- lucid and aware, surrounded by her students and family. The light of the teachings shines on through her example and inspiration.