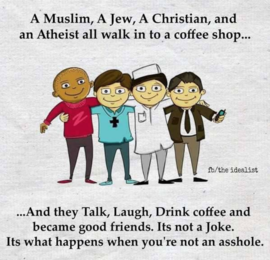 As the saying goes, you catch more flies with honey than with vinegar, though I am not sure that holds true for this presidential election cycle, especially for Republican frontrunner Donald Trump. It seems like every day brings us another sound bite of Trump spewing a lot of angry, aggressive vinegar and attracting a lot of killer bees.

In a country where anything is possible, a veritable land of milk and honey, the election of a ruler is an important process, not just because that person will end up as the President of the United States, but because it clearly shows us the thought process and beliefs of our fellow citizens.

Over the 20 years of my adult voting life, I have seen the divisiveness of this country grow more and more polarized, to what seems like a point of no return. The outright openness of prejudice, racism, hatred, and violence during this election, provoked by one of the potential leaders of America, is something reminiscent, I would only suspect, to Germany in the 1930s to mid-40s. And it scares me. It should scare you too.

But maybe the current political climate is just a normal cycle of one step forward, two steps back. The ebb and flow of the two-party system and two-party beliefs struggling to maintain control, balance. Because good always comes with bad, right? Just recently, in 2015, good prevailed and Marriage Equality became legal in the United States. But then, states like Indiana started passing Religious Freedom Restoration Acts, giving business owners the power to use their religious beliefs to legally discriminate against lesbian, gay, bisexual, and transgender (LGBT) people. In fact, a recent survey from the Pew Research Center showed that 57% of Americans stated that it was OK for businesses to refuse to serve gay couples if they didn't believe that two men or two women should be married. One step forward, two steps back?

I am a gay woman. However that does not define me. I do not use my sexual orientation as a platform, it is not "who I am," it is a part of me, but not all of me and does not solely define me. Though it has formed who I am today. Honestly if it weren't for all of these inequalities popping up so often, I wouldn't even think about myself as anything other than a human being going about my daily routine. But haters gonna hate, and so I feel the need to profess.

I consider myself a very open, inclusive, tolerant person. I have a lot of diverse friends and colleagues and I love them all because of their diversity, not in spite of it. I would fight hard for any of them if they were being treated unfairly or unjustly. Over the years I have fought for many things and for many people, most recently for marriage equality. Last year, I brought my daughter to the #Blacklivesmatter rallies in Philadelphia. I explained to her why we were there and why it is never OK to treat anyone differently based on their race, religion, sexual orientation, gender, or socioeconomic status. My 10-year-old daughter was confused, not by what I was saying, but why grown adults didn't already know this. She is even more confused by Donald Trump and all of his supporters -- she is not alone!

The Bible says, "Do to others as you would have them do to you" (Luke 6:31). I interpret this verse to mean that everyone deserves respect. I am not going to get into the dissection of the Bible for good or for bad. Honestly, I believe organized religion plays a very big part in the hatred and inequality that plagues this country -- nah, the world -- though this country was not supposed to be governed by religion. Recently, the Associated Press-NORC Center for Public Affairs Research released a poll on American's beliefs around religious freedoms. Not surprising, 82% of those surveyed believed protection of religious freedom was important for Christians, but the percentage decreased precipitously for other religious groups, with 70% believing in religious freedom for Judaism, 67% for Mormonism, and 61% for Islam. But this is the country we live in and these are the injustices we must fight. Thus, here I am, trying to describe why, in this country, in 2016, we still have to fight for equality for all people, and why we have to do so against a politician running for the highest elected office in our country.

This is a big country, built on diversity, where anything is supposedly possible, and yet our fellow Americans will do whatever it takes to keep down those who are "different." I would urge you to be very careful, because the definition of "different" and who it defines, can change on a whim. One day you may be "different" too! But don't worry, I will be there to fight for you! But for now, I ask that you rise up and fight back, because it will take a louder, more unified voice to stand up for inclusion, kindness, and peace then it will for prejudice, hatred, and violence.