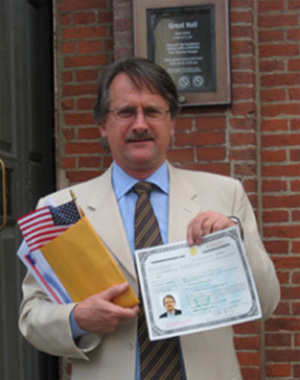 With all the talk swirling around about immigration, building walls and expelling millions of people from the US, I thought I should tell my story about becoming an American citizen. It's a story of romance, passion, and great expectation and how this all crashed upon the rocks of government bureaucracy only to succeed wonderfully in the end as a manifestation of what makes the country great. But let's start at the beginning.

In 1998 I was running the Bournemouth Symphony Orchestra in the U.K. One day I picked up the phone to a charming inquiry from a firm of head hunters in Pasadena, Morris and Berger, who were selling the idea of my applying for the position of President of the Oregon Symphony. Eventually I found myself in the mix and one thing led to another and the position was offered.

Big decision for the family. But we decided to jump and to have an American adventure.

Then there was that small matter of a work visa. The orchestra had an attorney working on it 24/7, or so it seemed, and I made travel plans to relocate and start my new life. As I was buying the ticket the Orchestra's Finance Director, the indomitable Claudia Burnett, advised that I would need to buy a return ticket (!!) as the issuing of the work visa had been delayed. I arrived and within days found that because of the visa delay I couldn't be paid my salary...and I would need to leave the country, go to Vancouver, British Columbia, and wait in line for two days at the US Immigration Office to receive my visa.

It was, at best, an unusual start to my new position. But undaunted, I decided to go with the flow. I flew to Canada, waited patiently in line (incidentally, it was then that I met the fellow sufferers who would always be in line with me at such places...three charming Mexican gentlemen in front of me and an 80-year old Ukrainian lady immediately behind.)

At the end of this long waste of time, I was truly one with the "poor and huddled masses," but excited about having the right documents, and especially about the prospect of being paid. I returned triumphant. The job developed and I fell in love with Portland, Oregon, and America. 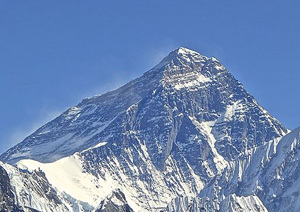 Now that should have been the happy end. But it wasn't. I liked the US so much I wanted to become a Permanent Resident, which meant applying for a Green Card. In terms of Immigration challenges, this was Mount Everest. The same attorney was retained and we began work. In looking at my file, Immigration was surprised to see that my position had not been advertised. That was because the Orchestra had used a headhunter. The agents were not convinced and demanded that the position be advertised nationally; otherwise my work visa would be revoked. The argument, "But I like it here," was ineffectual. At this point, which I confess felt pretty precarious, Claudia Burnett submitted to our attorney a major article from Harmony Magazine. It reported on a successful series of collective bargaining negotiations by the Oregon Symphony that utilized a new technique called Interest Based Bargaining that I had introduced. The article...and a big thanks to publisher Paul Judy for this...changed everything. It gave me a new status, according to my attorney, the same level as a brain surgeon or nuclear physicist. I am not joking. This was very serious, as you'll read later.

We had won this round and were approaching the foothills of the Himalayas...the Green Card. I was informed the process would take about six months max (this was late 1999). The forms were completed. All the information submitted. We waited confident and energized. Nothing happened. Or when it did, progress was glacial. Questions were on a steady drip feed from Immigration. Then 9/11 happened and everything stopped. We were left in a holding pattern. The attorney submitted letters of support from Senators, and Congressmen, and the wheels began to churn again.

Eureka, there's a break through. The attorney called and said we should expect good news in a matter of days. 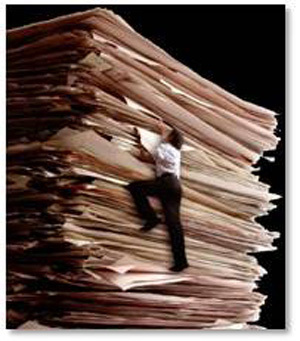 Then the breakthrough became a break up. My file had attracted more detailed scrutiny and agents discovered that I had been born in Egypt. This is true. But it was the Egypt in the 1950s, when the country was a British Protectorate with my father stationed there as a British Army Officer. Immigration demanded my Egyptian birth certificate be submitted within 30 days or my application would go to the bottom of the pile. We were already two years into this process so it would be a really big pile to fall under.

So...the first call went to my mother in the U.K. who was hysterical with laughter. I was born on a military base and have a British birth certificate and the Egyptians wouldn't have known of my existence let alone documented it. Next step: phone calls and e-mails to Cairo, Washington, London. Gradually, my assistant Sherril amassed a file to prove there was no Egyptian birth certificate. Reluctantly, Immigration was convinced. My file began to edge forward. And the most curious thing of all: I discovered that I am a recognized Egyptian citizen after all! 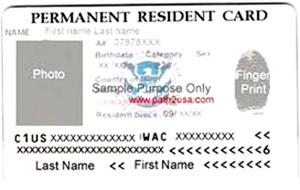 Two years later and it happened (if you're counting...that's more than four years into the process). Success! The Green Cards arrived for the family and me. The only disappointment was that they are not Green. They are sort of nondescript, but I loved mine to pieces any way.

To apply for citizenship, we had to be Permanent Residents for a further five years. Given our experience up to this point, my feeling was that the citizenship endeavor would be as arduous as the moon landings. But we decided we really wanted to proceed because the US is where we wanted to live and be and contribute for the long-term future.

Amazingly, becoming a citizen was remarkably easy and it all happened within a space of weeks. And my Green Card became famous. Well, just for a moment. The official who did the final interview with me ran the card through the system and looked at the computer screen in amazement. "But I have never seen anything like this. It's a special green card and you have the status of a brain surgeon." Well, thank you again, Harmony Magazine! 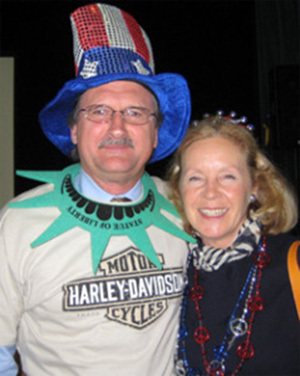 The only traumatic part of it is was the swearing-in ceremony itself. It took place at historic Faneuil Hall, Boston, and it was conducted with wonderful ceremony and pomp. More than 300 other people from every ethnic group imaginable were sworn in with us. The speech by the Judge was eloquent and moving. It came time to join the procession and receive my certificate of citizenship. Standing in the very long line, I saw people holding their Green Cards and...handing them in. Surely this can't apply to me. I waited more than four years for that card. I went to Everest and back to get it. It's mine and I still need it. We grew up together in the US, I told the official collecting the cards. She said, "But you're an American citizen now, sir." I repeated my story. Same reply. I said it again. And then I finally got it. I'm an American citizen now.

Postscript
Around this time, I was having dinner with my wife in a New York restaurant. I like to chat with people at nearby tables when we are out and I noticed an elderly couple who were engaged in choosing their wine. I asked their advice and thus began a conversation. Their names were Michael and Ilse, and they were in their late 80's, and they had a story. Ilse was from Austria and she had escaped the Nazi Anschluss in 1938 by managing to emigrate to the US where she had distant relatives. She had just been visiting these relatives and had been given the original letter she had written in 1938 asking for help. She showed me the letter which was hand written in a tidy script in pretty good schoolgirl English. It was a very moving plea to save her life expressed with utmost dignity and respect. She met Michael when she came over in 1938 but only very briefly. They met again in 1944 when he was a fighter pilot in the Pacific home on leave. And that's when I got it. I was meeting the embodiment of this nation's vision and greatness. The land of the brave, and the home of the free.