Six and a half years ago, I started my career in development cooperation in a coffee producing area of northern Peru. In the framework of the Junior Programme of the Belgian development Agency, I was sent to work there for two years in an environmental programme. Although the country has been experiencing a very strong economic growth over the last two decades, much of it is at the cost of its natural resources, so a large share of ODA is being targeted towards this issue.

I got to experience what sustainable development was all about from a very local perspective. The summarized numbers and anonymous data in the reports, powerpoints and lecture notes I'd seen throughout my academic formation were becoming real people, real coffee beans, real trees. Trees that were being cut down to make way for coffee plants, by smallholder farmers.

On days out in the field, I would stand in awe of mighty Podocarpus trees, hundreds of years old, but because of their location at the edge of an agricultural expansion front, I knew that within a few years they would almost certainly end up as construction wood. The unfertile mountain forest soil where they were standing would become a coffee plantation or pasture.

That's climate change. That's land degradation and biodiversity loss. Add the pesticides and artificial fertilizers contaminating the soil during cultivation, and you have some of the most important wicked problems our global society faces today. Deforestation, forest degradation and land use changes are the primary contributor of greenhouse gas emissions not only in Peru, but in most tropical countries.

Ppm values of Carbon dioxide, there were the numbers again. 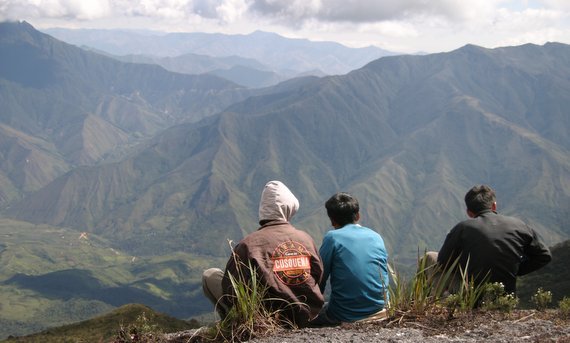 Coffee farmers who are also voluntarily involved in protecting the boundaries of a national park, overlooking the deforested mountain landscape they live in. Source: Pieter Van de Sype

Back to the real people. Poor coffee farmers, who gladly invited me for a plate of rice with some precious roasted guinea pig, a slice of tomato and a lettuce leaf, half a lime and some very spicy chili. After having walked the steep eastern slopes of the Andes for hours, those were the best meals I ever had. The vast majority of the people living on these slopes rely for their humble income on conventional (unsustainable) agriculture and livestock. Those simply are the most straightforward choices to make money. Although in theory the conversion to more sustainable, agro-ecological practices, in the long term would enable them to have an even higher income in a more environmentally friendly way, in reality it's not that simple.

The coffee producing areas in Peru, which are replacing the enormously important cloud forests (both in terms of biodiversity as ecosystem services), are complex systems, resulting from the interaction between acidic forest soils apt for coffee plants, a history of immigration after land reforms in the sixties, a large pool of cheap labor, monopolies of coffee buyers with direct links to the global market with fluctuating coffee prices, production chains where virtually the whole population to some degree is involved in, competing banks providing credits for smallholder farmers, local authorities providing incentives and taking measures to keep the local economy booming,... and so on.

When you look at it from the top of a hill, and with a little bit of imagination, you can see it, this landscape. Not only the parches of remaining forest, mainly islands on the tops of other hills, the ever advancing front of the surrounding coffee plantations and pastures, different patterns and textures of green, but also the town centers where financial transactions take place and land use decisions are made, the roads along which the money, pesticides and coffee beans flow back and forth, and the mountain streams in between the trees that are becoming increasingly dry. It's at this scale, in these landscapes, that climate change is being caused, but at the same time, it's where it will affect the people living there; Peru's mountain areas, with low resilience due to poverty and high risks due to the slopes, are extremely vulnerable for the impacts of increasing occurrence of extreme events. 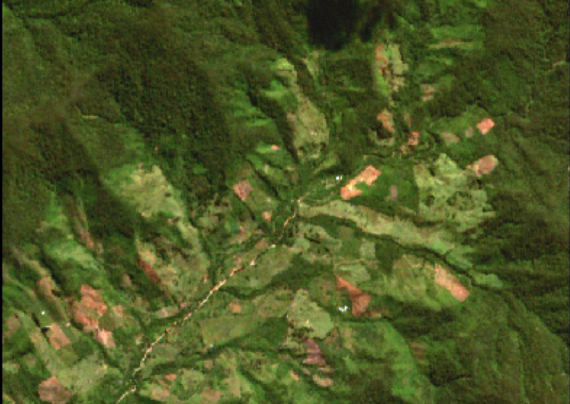 Tackling deforestation and other wicked problems is not just about awareness raising, or capacity building in better practices. It is about changing this whole landscape, this whole system - or at least some strategic leveraging points. It requires a holistic, multi-sectorial approach, balancing ecological, economic and social interests. And a pragmatic one, at least in a sense that it's based on an understanding of what drives local agents, and what will make effective changes in their behavior, not just ethical principles - what should be done. Last but not least, it is context specific.

That's also the opinion of the organizers and attendants of the Global Landscapes Forum, the most important event alongside the UNFCCC Conferences of the Parties since the COP19, in Warsaw 2013, as well as this year at the COP21, 5th and 6th of december. Politicians, NGO's, Communities, Academics and even the Private sector - because all these actors constitute landscapes - will try to contribute to finding better ways of tackling climate change through implementing this landscape approach, with the ultimate goal of creating a better future for all.