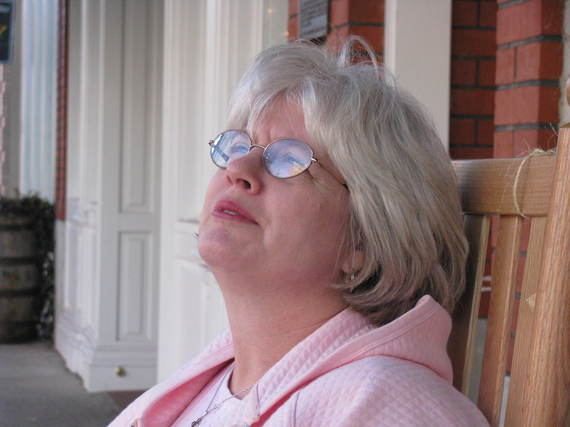 This morning the television radiated random sounds in the living room as I fished green beans out of the drain trap to round out the dinner menu -- potluck is always iffy at my house. A smooth, masculine voice swung into a melody, exuding the sort of sounds that should have raised the heat index in the playroom and caused the thermostat to kick the air into overdrive. It threaded its way through the cobwebs on the ceiling and oozed down the hall where it permeated the kitchen and dissolved the cinnamon and spice air freshener.

As the music wrapped around me and nibbled at the pasta sauce that mysteriously covered one cheek, I had an epiphany. Not the sort of epiphany where you discover you can just move the recliner over the dog poop spot on the carpet and not have to shell out your inheritance for new wall-to-wall, but the kind where you feel glamorous even when the steam from the kitchen sink makes your hair curl like the leaves on the fern you tried to keep alive all winter.

I realized that there comes a time in every woman's life when she needs to be sung to by a man with a heartbreakingly handsome voice in a language she doesn't understand. The sound of the words should drip with the dreams of her youth and the melody should hint of the promise that comes with time.

The abandoned television in the den sent forth a delicious mouthful of exotic sounds strung together with lustful chords that made me feel, for the first time since the diaperzoic era, that I am not the polka dot tent dress on the clearance rack of life. That somewhere there exists a man who would never cut his toenails on my side of the bed and leave little daggers for me to find at 4:00 a.m. He could be commenting on the musky odor of my underarm hair, as long as he looks at me like I'm the only woman in the world who could short his sheets and make him love it.

I've had enough stress. I spent my Beauty Plan Years at soccer practice. I have fondled a warm catheter bag and plugged the leak, bailed out a portable urinal, and emptied 67,892 wastebaskets full of vomit for children who couldn't make it to the bathroom on time. I have taught teenagers to drive.

I have earned a break, if not a breakdown.

So just once, let a man with eyes as liquid as a Dachshund begging for a bit of ham sandwich sing words I don't understand to me with the voice of the angel of Elvis.

When the going gets rough and the neighbor's kid who is allergic to foods that touch shows up at my dinner table on chicken pie night, the cat scratches on the bedroom door like an old aunt trapped in the attic, or when I overhear one child scream to another who is huddled by the heat register in the basement, "Tell me what happens when I pour the water in!" I need to know I'm the one who puts the poppy seeds on somebody's muffin.

Someone who can drip lust in my lap like strained peas from a baby's chin and sing to me like he's warm maple syrup and I'm a short stack at the pancake house. Like horizontal stripes don't make me look like a beach umbrella in a tornado watch.

Drawn to the television by the tractor beam of his silken voice, I'm thankful that he doesn't speak English.

Because if I find out that he's singing jingles for erectile dysfunction treatment, it could spoil the whole thing.