In a morning of pale sun after a night of light drizzle Patrol Fuku 1, who had been monitoring daily the elephant female we had treated, reported she had fallen in the night and could not get up.

With a sense of foreboding I drove there and followed the ranger to find her. She lay in a thicket. Thrashing around in the attempt to stand up, one leg was stuck up a tree.

I could stand a few feet from her. I watched her carefully, as she watched me. The front right leg still hideously swollen -- younger than I thought, small adders: she had not yet calved. And now no more chances. 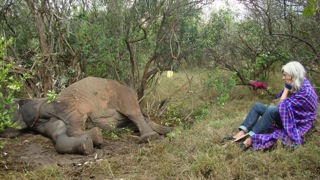 Surreal: a still alive African elephant, fearful, mighty, impossible to tame? I saw only a creature in pain, hurt by greed and cruelty, helpless, at the mercy of our whim.

With love and shame, I reached out to touch her. Her open eye rotated focusing on me, staring wildly, inflamed, terrified, watching me as I watched her.

I sent to my car for my yellow shawl to shelter her eye from the light. She twirled it up in her trunk -- soft and supple like the arm of a child -- and it lay discarded in the mud.

I called the KWS vets: very helpful, concerned, but Sunday, would take them a day to sort out a chopper: too late I knew -- an elephant cannot lay down long -- and pointless anyway. They had tried their best: if the antibiotic had not acted by now, nothing more they could do: broken front leg infected by arrow? By bullet? Doomed.

I knew the decision would have to be mine.

It started to rain. It stopped. The sun drew its arc in the sky.

I sat in silence with the dying, helpless elephant female. Her deep rumble like the breath of the African earth. 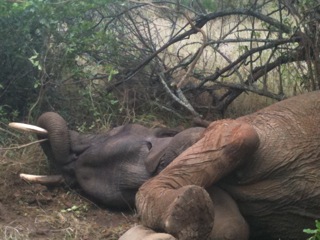 She knew I was there and a strange stirring link was formed in those hours: I tried with all myself to bridge worlds without words, I told her my love and my friendship, my solidarity and my sadness and my pain and my shame at being human. I let her feel that she was not alone and I would help her.

Night would bring the hyenas, and lions would find her. They would tear into her, stomach first, eat her when still alive.

Her death would be horrible, violent, slow. I had to spare her this. It was up to me.

The rangers had been brought tea and food.

They sat hushed, in the shade of a bush, waiting for the decision I would make. There could only be one -- we all knew. Play God. How dared I?

I phoned my warden, I told him. He agreed.

I chose the friend who I knew was the most competent to do what had to be done. He flew in. I was grateful.

One shot. It was over.

In the mud my yellow scarf was soaked in blood. A long way from the London shop where I had bought it-a life time ago.

Her long lashed yellow eye stared unseeing. She was beautiful.

"Mungu of the elephant will take care of her now", said Merino.

Is there a resting place, where the elephants go, endless pastures safe from the intrusion of humans, mighty forests with ripe fruits and lakes of fresh waters where to play undisturbed?

Ol ari Nyiro was once, just yesterday, the Shangri La of the elephant. Will it again be? Is there no end to the raping of the wild?

Leaving the rangers to remove the tusks, I turned and walked to my car, feeling I had aged ten years.

The elephant female is casualty no. 25 in Ol ari Nyiro this year, an unprecedented, horrifying, unforgivable number of deaths by poaching.

She is one of the thousands voiceless martyrs of a despicable, anachronistic, criminal market that goes on to this time. 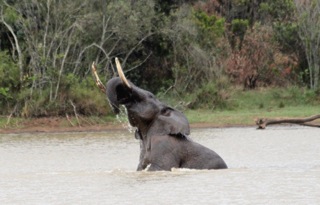 The time has come to ask for your help to PUT A STOP to the shameful trade of ivory and body parts of animals for trinkets and unnecessary medicine that is responsible for the current slaughtering of elephants and rhinos on the African continent.

And to the unforgivable shame of elephant hunting.

You can do it through internet, pressure groups, Facebook, Twitter, you MUST join this campaign. The torment the elephant female and thousands of elephants are going through now in the forests and savannas of Africa, where gangs of thugs now even use hand grenades to exterminate the ones with no choice, with no voice, who hurt nobody and only need to be left alone, is an unspeakable crime and an horror that deserves the contempt and punishment reserved to crimes against humanity.

Elephants do not vote: they need champions. Be one.