As The Last First Day (Random House) by author Carrie Brown was my favorite new book of 2013, I jumped at the chance to interview her when she passed through New Orleans. Our talk includes a minor amount of spoilers, but not enough to spoil your read. For background, her character Peter is an elderly headmaster of an East Coast boarding school for boys and Ruth has navigated her life as his wife while searching for her place in a changing world. 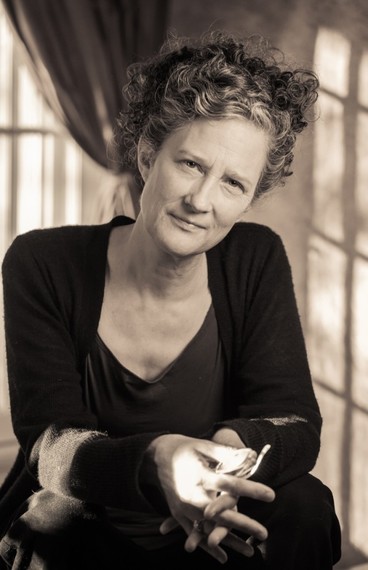 CB: I think that's true, that they have a kind of an acquaintance with the mystery that is the beyond from the very beginning. Ruth and Peter, too, because his mother suffers from mental illness. And they are, as separate people, having to consider: What does it mean to have a day in front of me? What do I do with my life? In a way that maybe if you don't face those kinds of questions about mortality you don't actively think about that. But they really do. Peter makes very definite kinds of decisions about how he is going to live his life in the face of what is hard. Ruth struggles with that more with: "What is it I'm supposed to be doing? Am I supposed to be your helpmeet, that old fashioned word? But also Betty Friedan and Gloria Steinem are telling her that's not what you should be doing, that's not a good way to live your life. And her having to battle those twin impulses with: What do I do with this day that's in front of me, given that I'm acquainted with the end in some ways?

KDB: Ruth also has her literary aspirations because she's raised with the classics, but she sees people shooting up and over her and takes a lifetime to recognize that maybe what you're meant to do is what you've already been doing.

CB: She was untutored in many ways because she was so isolated. So she had to form her notion of what was valuable by herself.

KDB: Having someone do as much work as Ruth did for Peter in his career in academia would be a paid position now, but not when she started out. The characters themselves are so lost but inspiring. What characters from which authors have inspired you in your recent reading?

CB: I'm in the middle of Elizabeth Graver's new novel The End of the Point, and that is a book that is filled with characters who are compelling. And it's a book of many generations and many voices. In terms of books that have been out there recently that absolutely has commanded my attention as a novel. The writer I discovered for myself along with a lot of other people was the short story writer Edith Pearlman who won many awards for her collected stories: Binocular Vision. It is wonderful. Story after story, character after character, those stories and characters will stay with me forever. I'm expecting to fall in love with Alice McDermott's new novel Someone, which I have bought because I've just loved her work over the years. It's so consistently lovely. And she writes at a pace that I really like. I like it as a reader and I like it as a writer, a slow, luminous contemplative pace.

KDB: I very much enjoyed that in your novel. Not to divide it on gender lines, but you don't often get male writers covering a day covering small details in the day in the life of a woman preparing for an event that is meaningful in a couple's life.

CB: No, You would never get a male writer beginning a book with a woman vacuuming.

KDB: It's deftly done. With description of their aging, that process of letting go of tidiness, and then the husband who doesn't care that tidiness has been let go of.

CB: I know, I kind of fell in love with their love affair. And it was really fun to write a love affair that does not go bad.

KDB: They're both far from perfect, too.

CB: Yes, they make many mistakes. And they have shortcomings which they recognize in each other. He recognizes her impatience and her insecurity. But they see each other very clearly and they still really love each other.

KDB: They know what they have.

KDB: It's true, she gets robbed! The young gun's coming after her husband's job!

CB: All kinds of bad things happen to her.

KDB: And yet it's a love story. So here's my drill-down question like there's a magic writing time of day and direction to aim the desk. As far as the writing process, what are some of your steps to getting started?

CB: I don't watch any television at all.

KDB: I KNEW that was the secret.

CB: I just don't. Mostly I've felt like I didn't have time for years and years. But I do sometimes turn it on if I have piles and piles of laundry to fold. And for a while there was a commercial on TV that shows some guy getting dressed, he comes downstairs, kisses his wife goodbye and picks up his briefcase and he does a swan dive off the edge of his front walk. That sense of taking that swan dive out of your immediate life into the dream that is the story you're writing is the thing that I'm always trying to find. Because my life is like most of us, busy. I have kids and dogs and ancient old cars that are breaking down, appliances that need to be repaired. All that stuff. So how do you actually take that swan dive? I do think it is a kind of mental exercise that you do. And you have to do it. If you don't do it, really you could be forever detained by the world around you.

KDB: The characters show the level to which you dove. The psychiatrist is such a gorgeously realized character. How were you inspired to write her?

CB: An interviewer once pointed out to me, you have so many physicians in your novels. It's like something someone points out and you realize: I DO wear a lot of black. My husband and I have a disabled child so a lot of our adult life, a lot of her life has been spent in the medical community in one way or another. Many of the people we've met have been highly intelligent empathetic people. And I think I'm always reaching out there for someone who can tell me what to do. Do THIS and it will be okay. Do THAT. You know this maybe from caring for elderly parents. When you get somebody who steps into your life and says these are the things you need to do, this is what's happening, here's how to understand the circumstance in front of you it's hugely comforting. So Dr. Wenning I think is that character who I'm always looking for really in my own life. The older person who's smarter than you are, but who also will be patient with you and sympathetic and will say: do this. So Dr. Wenning says to her: Get on the bus. Stop complaining. Shut up. Don't whine.

KDB: "Hang in there baby." I love the aphorisms.

CB: Yeah, she loves them. "Happiness is a warm puppy. Get a dog." But she's not wrong, really.

KDB: She isn't. We've become such a society of peers, sometimes social media can mean you're all reaching out to know you have this common experience but it's almost eliminated experts from daily life. For the love of GOD, give us some experts.

CB: Yes, a few experts would be really helpful. So she's the expert. I like that she only knows a couple of jokes. And I like that she loves Ruth, that she is a character who's capable of that kind of generosity. As Ruth loves Peter. I'm attracted to that, as we all are in other people. Someone who can really truly generously love somebody else.

And really see them.