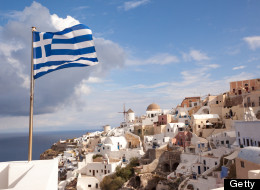 A little over twenty-five years ago I made my first trek to Greece and Cyprus. One of the things I recall younger Greeks criticizing their elders for was their lacking of belief in the newly introduced 'every-man's' banking system. Twenty odd years later, when I moved to Greece, multiple banks and their branches were more common than frozen yogurt shops--inside joke.

Nevertheless, I arrived just in time to hear the last vestiges of belief in banks. Mind you, I had just left California where Washington Mutual and every other bank seemed to be going under. I arrived in Greece with a fresh experience of bank abuse: I had just experienced my first investment loss on a rental, simply because the bank that held my mortgage chose not to accept any of the buyers for my home (nor the one buyer who, ideally, just wanted to assume my loan). Unbeknownst to me, until thousands of dollars later, my mortgage holder decided to hold onto its properties and just let people lose their homes, while they deceptively bailed out of their commitments and sold themselves off to a larger bank (they basically restructured).

So, when I heard of families still laughing at their recently deceased loved ones who hid thousands and thousands of drachma in floorboards over the years of their lives, I had to think--they were smart! How many of us would still have our funds if we hid them in our floorboards? Well, okay, this is America; we still might not have saved our investment funds given our high crime rate to personal property.

But, the sad reality of the Greek story is that the children and grands who were finding those funds, ultimately decided to cash the Drachma in for Euros. Thus, with Monday's leading story about Greek banks closing and limiting withdraw amounts, I must wonder if the elders' distrust of banks was a valid 'superstition.' Their efforts to save their funds for their progeny--if taken seriously--were well intended and correctly grounded in distrust for automated lending trees. Furthermore, had floorboards not been pulled up for home improvements--often due to bank marketing ploys that encouraged Greeks to commit to loans--those drachmas might have given Greeks some 'ancient' leveraging power! And though, I often admire the Greeks as living Mohicans for their historically obstinate stance against imposed oppression, I just hope if Greece falls out of the EU that there are more floorboards to be raided. Because, like the Last of the Mohicans, they may have to rely upon the preserved wisdom of the elder Mohican to guide their fortitude as they transition into a new and tenuous financial torrent.