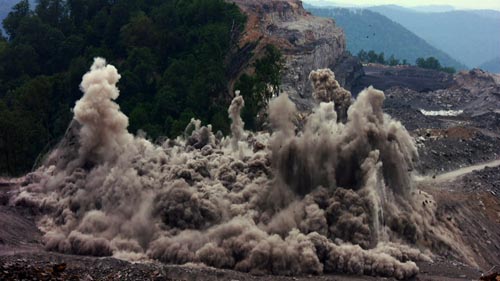 Every day the sound made by the detonation of four million pounds of explosives echoes through the West Virginia mountains as a small army of companies wages a war on the ridges laying bare the coal formed over 200 million years ago. Like all wars, even environmental ones, there's collateral damage.

"It's like living in Afghanistan or Pakistan," said Maria Gunnoe, who still lives in the house she grew up in, which is now just below ground zero for the Jupiter mine's explosive mountaintop clearing operations in Boone County.

Blasting away 800 feet of mountain removes the ancient hardwood forest of oak, birch, maple, beech, ash and dogwood that not only provides shade and supports wildlife but also gives the land the ability to retain water when it rains. Now, it just floods and threatens the homes below, in the valley, or hollows, as they're called. A devastating flood in 2000 put Gunnoe's home underwater and made her aware of the damage caused by what's become known as Mountain Top Removal (MTR) coal mining. 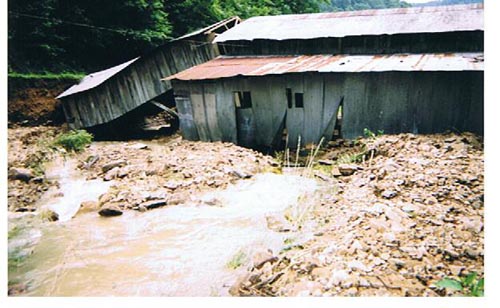 The flooding was not the only problem caused by MTR that fills the air and once pristine streams with the toxic debris from its explosive mining. "The water and the air that our children breathe is the worst in the country," said Gunnoe.

The blasting sends dust, containing silica from the shale and granite, skyward and if inhaled can lead to silicosis, which are obstructions on the lungs that block the flow of oxygen into the blood. This alone can be debilitating or even fatal but it also weakens the immune system and increases the likelihood of contracting other lung diseases like tuberculosis or pneumonia. Studies have linked exposure to silica with various cancers, e.g. lung, stomach, lymphatic and skin as well as kidney diseases such as nephritis and end-stage renal disease.

"We've had medical studies done. We're finding silica dust in our homes, even in our refrigerators," said Gunnoe. "We as community members are breathing more dust than the workers. They have respirators. We're sitting ducks." 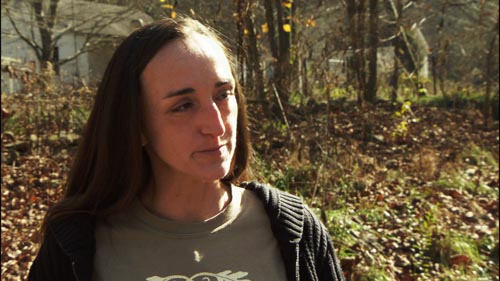 Instead of accepting defeat, Gunnoe the waitress was transformed into an activist working full time to stop Mountain Top Removal. "I became an activist to fight for what's important to me," she said.

Recognizing that jobs were important to the community, she joined other activists in a search for alternatives to blowing up the mountains. "We're at a crossroads now and we cannot sacrifice our planet for fossil fuels," she said. "They're poisoning our planet."

They commissioned a study that showed the prevailing winds blowing across the tops of the ridges would provide more energy than the coal being blasted out of the ground. Building and maintaining wind energy devices would also provide more jobs than coal mining and not harm people or the environment. Unfortunately, once you destroy the mountaintops what's left won't be high enough to be used as wind platforms. There's no second chance.

Gunnoe's fight to stop MTR and transform the Appalachian Mountains into a wind energy powerhouse attracted filmmaker Bill Haney and his partners, who feature her in their recently completed feature-length documentary film, The Last Mountain, which premiered at the Sundance Festival in 2011. Haney likes to make films that do more than just "demonstrate a problem," he said. "You have to propose a solution." Gunnoe was doing exactly that.

"I found this amazing community who were pushing to do something extraordinary," he said. "They're reminiscent of the farmers who fought the Red Coats (the British) during the Revolutionary War. No chance of winning but they forge ahead and win. They're the wellspring of our democracy," he said. "Democracy is a participatory sport."

"Unfortunately, the money the coal companies dole out to politicians "subverts democracy," said Haney. "Two thirds of the people in West Virginia are against mountain top removal, how come all the politicians are for it?"

The film makes it clear who's writing the checks and how tough it's going to be to defeat big coal's big dollars that keep twelve coal state senators in their pockets and nearly every other public official in those states. 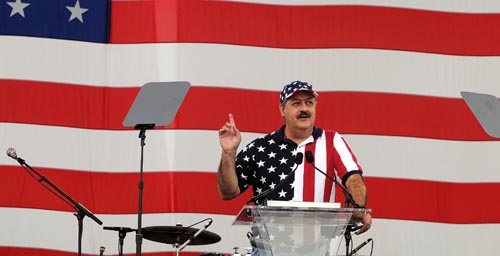 We meet Don Blankenship, who until recently was the CEO of Massey Energy. He became known nationally a little over a year ago when the Massey-owned Upper Big Branch mine exploded, killing 29 workers -- the deadliest mine disaster in 40 years. This mine had over 3,000 safety violations before the explosion but Blankenship was the master at delaying compliance. He was rewarded with a $6.8 million raise after the accident pushing his salary to $17.8 million, not counting a deferred compensation package of $27.2 million that year.

The film outlines how Blankenship earned his keep by "closing mines and reopening them with non-union labor."

The result: the majority of the miners in West Virginia who were once represented by the United Mine Workers aren't today. According to author Michael Shnayerson, "virtually none are." This has driven down wages, kept miners working longer hours and eliminated jobs.

"It's like a jungle, where a jungle is the survival of the fittest," says Blankenship in the film.

According to Robert F. Kennedy, Jr., who's also featured in the film, there are a lot fewer miners today in Blankenship's "jungle."

Kennedy remembers first traveling to West Virginia with his father and meeting coal miners. "There were 156,000 miners there when I was growing up. Now there are fewer than 18,000," he said. It's the industry's strategy to "fire the workers and use machines instead," he said. Of the 18,000, "there are only 6,000 in Mountain Top Removal."

Using an old union-busting tactic, many of these workers are brought in from outside of the state, lured by ads in USA Today and other papers. These are not permanent jobs or careers. A typical Mountain Top Removal mine is blown up, mined and covered up in nine years. The workers are as disposable as the mountain. The company plays on the miners' outsider status as it pits them against local activists who are concerned with their community's health and future.

The film takes us to a Labor Day rally Blankenship organizes for his workers and their families and we see how he uses the stage like a magician who deceives his audience by shifting their attention to something else. In magic, it's called misdirection.

They eat it up. But the film shows us the reality as it takes us to towns that have been abandoned as a result of the company's policies to eliminate jobs. "We're living in a dead zone," said Gunnoe. 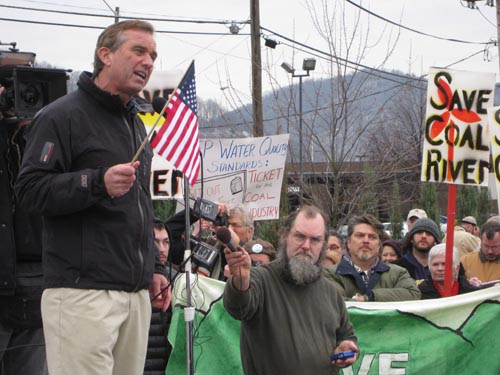 The misdirection continues as Robert F. Kennedy joins other activists at a rally outside the State Capitol to protest MTR. They're confronted by a counter-demonstration of angry miners who deny there are any negative health impacts from their work or the use of coal. They blame chemical plants for mercury emissions and defend coal since the "Indians" used it too.

What appears to be a genuine outpouring of worker sentiment is questionable because, according to Kennedy, they were given the day off by Massey and told to stand in an area Massey "organized as a barricade" between the protestors and the capitol building. 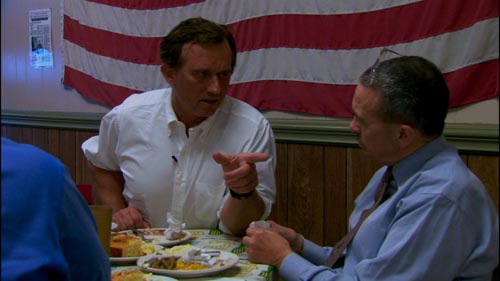 One of the film's best scenes takes place in a local café as Kennedy and Bill Raney, the president of the West Virginia Coal Association, an industry trade group, exchange views over coffee. Kennedy delivers a blistering denunciation of Massey for racking up 60,000 violations, many of which result in polluting waterways with toxins such as mercury. He says it's worse than "robbing a bank because a kid could eat a fish and get sick and get cancer."

Raney falls back on casting him as an outsider, "You guys from up North talk fast."

Raney's only defense is to point to the number of jobs coal brings to the state. To which Kennedy responds, "If this is so good for the economy of West Virginia, why is this one of the poorest states in the nation?"

While Raney and Blankenship rail about the outside agitators coming in to stir things up, they don't mention that the Frasure Creek mine above Gunnoe's house is owned by Essar Energy, a company headquartered in Mumbai, India.

This is beginning to look like a "banana republic," said Kennedy. "This is the model for a colonial economy."

The film doesn't tackle the growing number of foreign companies engaged in mineral extraction setting up shop in the U.S. and the huge coal mining operations across the country that are feeding the growing energy demands of the developing world. But it does provide an in-depth analysis of the impact coal has on climate change, on public health and the true costs of subsidies and tax breaks. It also lays out a prescription for a non-fossil fuel future. The filmmakers present the case that developing wind power alone would provide more good paying jobs than coal does and these jobs won't contribute to the destruction of planet. Instead they'll build a sustainable economy.

"It's not just mountain top removal, we have to get off of all fossil fuels," said the film's producer, Bill Haney. "Our can-do attitude has been eroded by those who try to divide us. Ultimately, we need a president with a plan to rebuild the U.S. economy," he said. We need a "clean energy economy."

"Coal is a transition fuel. We can't sacrifice our air, water and health. We've got to look to the future," said Gunnoe.

The film premiered at this year's Sundance Film Festival and opened theatrically in New York and Washington, DC on June 3.

The Last Mountain opens its Los Angeles engagement on June 15 at Landmark Theatres' The Landmark. The film's release will expand on June 17 to Laemmle's Playhouse 7 in Pasadena, Laemmle's Town Center 5 in Encino and Edwards' University Town Center 6 in Irvine, with a nationwide roll out to follow.