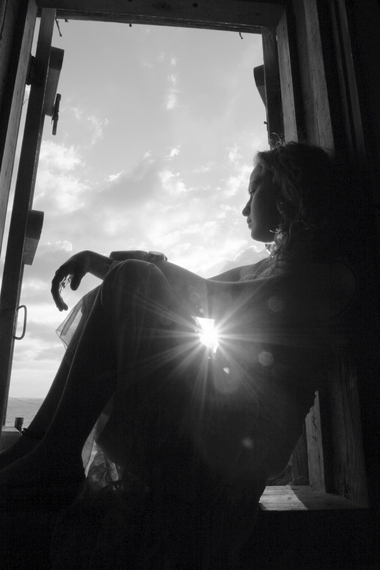 It wasn't the cold, sticky vomit beneath my cheek that woke me up. It was feeling my bladder let go and watching the yellow of my urine slowly spread across the white tiles that got my full attention. I was lying on the floor in the bathroom hallway of my home. It was the summer of 2006 and I was 51 years old. This was the beginning of the end of a self-chosen ride into dying. I was drinking too much, abusing prescription drugs and was a bulimic who did not know my eating disorder was self-hatred in action because it had been going on since I was 12.

Lying there soiled and shivering wet, I remember thinking, "If I can just get some sleep and rest a bit, I can fix this thing." I actually thought that I could get a handle on what was happening to me if I just tried hard enough and used my willpower and my wits. I was not ready to admit to myself that I was totally lost. I refused to see that I had been on a slow slide of self-destruction and soul-killing despair for seven years. I had gone to bed each night hoping things would be different the next day, but I never did anything different -- not deep-down-and-brave different. In looking back, I realize I simply did not yet know how.

My parents pretended nothing was wrong. Their fear that I was falling away from them was palpable as they met my "everything's okay" assurances with bright-false smiles and tightly held eyes. My children were simply trying to survive me. They turned to one another in comfort and a search for normalcy as they watched my slow dissolve into someone else.

My husband was desperate, angry, controlling and confused. He did not want me to be broken and lost. He wanted his marriage and his wife, and he would do anything to keep them both -- whatever the cost to him or me. He fought me and loved me every inch of the way. Not wanting to admit that I was in a trouble that he could not fix, he sought out experts and demanded they bend to his will.

I let my husband think he could "fix" me. It was simply easier because it kept him mollified and quiet. I accepted a manufactured diagnosis of bipolar disorder and took the pills he thrust on me as the "no-changes-needed" answer to what was wrong with me. They weren't. What I was suffering from was self-abuse and coming to a point in life where I could no longer stay busy enough to avoid the full-frontal attack of looking at me -- of coming face to face with my own soul. I was sloppy and spitting mean with self-pity. I was resentful, sniveling and lazy. I blamed everything and everyone for how I felt, except me.

Coming to covered in my own vomit and urine wasn't the "wake up" call you might have thought. I stayed in that house self-dying for another three months, until the day came when I realized that I probably had 30 more years live. The horror of living all those years feeling as I did was a fist slam to my stomach. It was also the soul punch that finally pushed me to action. The first action I took was to leave my husband and move into a place of my own. I chose to no longer bow my head or my spirit to the control and demands of what he thought was best for me. I had been doing this for 29 years because I so needed him to love me. In looking back, I understand now that this need for others to love and approve of me was also a big part of what was killing me.

I then got very busy and mind active. I was telling myself, "You can do this. Get going. You're going to be okay!" I started going to a 12-step program and got a sales job. I had new friends and meetings to attend. I felt empowered and hopeful. But three months later, I was on a couch drunk again. I was also abusing myself with food and overusing my medications. My self-talk and affirmations, my meetings and support had not worked. Why? Because I actually hated who I was and had been at war with myself. I had been fighting a battle I could not win -- a battle with myself.

As I sat there sobering up on that couch contemplating the wall paintings, the TV and the sliding glass doors of my apartment, my vision seemed to change. A powerful thing happened -- I was looking out of my own eyes! I was no longer looking at myself from the outside, criticizing and condemning me or cheering me on and celebrating me. I was feeling and seeing "me" from the inside. The struggle was over. I was no longer two people. I was one -- me. In that profound moment of deep change, I began to get well from the inside; from this newly discovered and self-owning place of "I." There was much work to be done, but it no longer seemed scary or impossible.

Ever since that day almost eight years ago, I have sought to come from this centered "I" -- with honesty, quiet bravery and ever-growing self-love. As I have learned to come from this source of me flowing always towards myself, I no longer judge me, I no longer see myself as "other." I no longer have an "outside me" tearing an "inside me" apart. I simply am. There will always be bumps and bruises in life, but I see these now as growing places instead of upset or self-pity places. I have a loving laughter for my own spirit and a compassionate joy in learning each day who I am, as I go ever further into the profound "I" of me.

Robin Korth enjoys interactions with her readers. Feel free to contact her at info@robininyourface.com or on Facebook.

To learn about her new book, "Soul on the Run," go to: www.SoulOnTheRun.com
You can also download her "Robin In Your Face" free daily motivational app by going to www.robininyourface.com/whats-new/