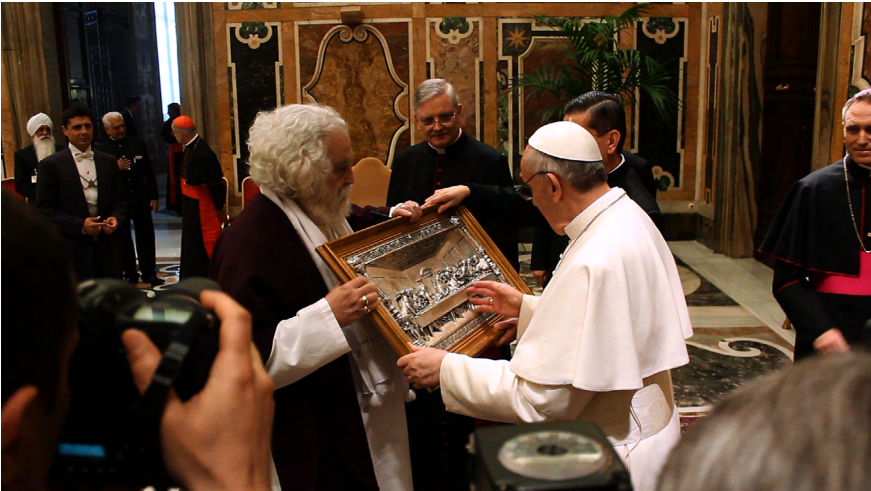 Bible stories are hot and Hollywood studios are rushing to cash in. Leading the pack, Viacom is teaming up with Paramount Pictures for a $125 million epic, Noah, starring Russell Crowe. MGM is planning a remake of the 1959 blockbuster Ben Hur, which will place greater emphasis on Jesus. And Time Warner is developing a a film about Moses, with Steven Spielberg mentioned as the possible director. These are just a few of a "boatload of religious films" expected from major movie studios, according to the Wall Street Journal.

Although these films are capitalizing on public interest in the Bible -- the bestselling book of all time -- and the heroes and villains of religious history, there is one story, says eminent filmmaker Armondo Linus Acosta, that has never been made: The Last Supper. Yes, The Last Supper is celebrated in artworks and religious ceremonies, but no film has ever explored the inner worlds of the Apostles and Jesus in this seminal moment for Christianity and the world. Acosta's passion to tell this story, entitled The Last Supper According to Judas, was evident in my Skype interview with him at the Academy of the Film and the Arts in Belgium, which he founded. Here are portions of our interview:

Starr: Bible films have a long history. What do you think about them? And do you have a favorite?

Acosta: Long before I began working in the film industry, I was a voracious film buff. As my mother and father were in "showbiz" I saw virtually every major film that was released from the late forties till the mid sixties. We have to remember that the blockbuster spectacle films of the day were the Biblical films. In terms of genre films, there is no question that every major studio made their Greatest Story Ever Told -- which I have to say is my favorite Biblical film of the three that I consider to be filmically masterful: The Greatest Story Ever Told, The Bible, and Franco Zeffirelli's most lyrical Jesus of Nazareth. Remember that the directors of The Greatest Story Ever Told, George Stevens, David Lean and Jean Negulesco, are three great storytelling film directors. With The Last Supper, I have no intention whatsoever of making another Biblical film as such. We have come a long way in storytelling on film. I believe all those rich, religious films of the past have invited us now to go deeper into the intimacy of the characters, and deeper into in the minds and feelings behind the words. Now, we can let visual beauty be the storyteller. Man has the tendency to forget what he has heard -- but rarely what he has seen.

Starr: Your distinguished career in filmmaking dates back to the 1960's. You've worked with many of the greats of the film industry, including Francis Ford Coppola, Alfred Hitchcock, Vittorio De Sica, Stanley Kramer, and Orson Welles. The list goes on. Your crowning achievement, the innovative 1990 feature film Romeo and Juliet, was described as "an artful choreography of its feline actors." John Hurt was the sole human actor in the film, with voiceovers by Maggie Smith, Vanessa Redgrave, Robert Powell, Ben Kingsley, Francesca Annis, Victor Spinetti and Quentin Crisp. You also made fifteen short films on the Psalms, in association with the Vatican. So you've done it all and are clearly the right person for The Last Supper According to Judas, which is in development. But why now, at this point in your illustrious career? What is the pull?

Acosta: As a baptized Catholic, it is my devotion, love and respect -- and the omniscience, omnipotence and omnipresence of Jesus the Christ and the Catholic principle. But it is the fact that this assignment, and I do mean assignment, came through as a revelation -- not a worldly idea or desire that told me I am to make The Last Supper; not just as a film, but as a reminder of the true grace of omniscience, and the devotion of the Apostolic principle.

Starr: In the Gospels, Jesus is the center of the Last Supper story, but not in yours. In fact, Jesus will barely make a physical appearance -- and then, only at the end. Why?

Acosta: The success of the Catholic religion is based on a "realized" one: Jesus, who was omniscient when in life. And after the crucifixion, that omniscience, the direct experience of Christ consciousness, continues. I depict this truth by having each Apostle experience his own omniscient dialogue with Jesus. They communicate telepathically, "cerebrally" -- the audience will follow the minds and hearts of the disciples as they hear the voice of Jesus and respond. This creates not just man-to-man conversation, but a deep and profound soul-to-soul contact. Quite frankly, what is most exciting to me as a filmmaker is that the various dialogues will be not only statements of the day, but will be prophetic glimpses of the future of Christianity.

Starr: In the Gospels' account, twelve Apostles and Jesus are present at the Last Supper. But in your film you will focus on Judas plus four others. Why? How will you choose?

Acosta: Other than Judas, I have chosen the Apostles John, Matthew, Thomas, and Peter. Not just because of their familiarity, or even their fame over time -- it is their character, passion and obedience which I think best tells the story of the beginning of Christianity. Judas clearly was the Apostle who was the divine catalyst in the Christian pantheon. Was Judas' act that of betrayal or of devotion? Was it of his own free will, or was it God's will choosing Judas as the ideal one to orchestrate the crucifixion? I contend that the crucifixion is likely the single most heinous and misunderstood act in human history.

Starr: What do you believe will be the main appeal for filmgoers? Will your film be primarily inspirational for faithful Christians, or is there an engaging message and meaning for others as well?

Acosta: When I wake up each morning in my life, there are certain truths "I know" to be true; that I am in human form, a man. My reason for living is God's will, and that I act out God's will as an artist. And that I do my best knowing the undeniable fact that truth, simplicity, and love are God's gift to mankind. Beauty, experiencing it... experiencing beauty can be considered one of man's greatest joys. I am assembling a cast and crew of the most gifted and talented artists and film technicians to create a work of passion and beauty. It is time, excuse the Pontius pun, to re-tell the greatest story ever told, with that passion and beauty.

Starr: We know so little factually about the Apostles -- and virtually nothing about their inner lives. These uneducated tradesmen follow Jesus -- but who are they? Why did they follow? Is there anything special about them? They appear almost like props in Jesus' life. Historians, theologians and other scholars examine minutia that they use to build or spin "facts." But you are an artist. How will you construct the "facts"? What does your artistic perspective bring to an understanding and presentation of Jesus, Judas and the other Apostles at the Last Supper that's different?

Acosta: After years of research I have found that the sketchy truths about the beginnings of Christianity can only be interpreted. I remember years ago when I was working on putting the Psalms on film for then Pope John XXIII -- rather than doubt, I chose to accept the words of King David, that they were the psalms of King David, and not fall into the banal human trap of who, what, when, where, and why. Let's simply dive into the beauty and vision and meaning of the words. As an artist, it was a thrill to have poetic license and not simply have to film bone-dry facts. Leonardo da Vinci has been one of my "omniscient" mentors since I was a very young man. His creation of the Last Supper shall remain my true inspiration for the film. As I did with King David's Psalms, I will simply explore the beauty -- the information that has been passed from generation to generation. Frankly, it gives me the artistic freedom to create my vision of the Last Supper.

Starr: Almost all films have one director. But you intend to use five--one for each of the stories of the five selected Apostles. Why? What will this intriguing strategy add? And how will the segments meld into a unified whole?

Acosta: I have had the good fortune to work with some of the greatest directors in history of film. And now, looking back over fifty years, aside from the obvious talent, they were stylists! Each one had a style, a personality... a way to interpret, to create, to manifest a character -- to simply invite you to believe. I want the last twenty-four hours of each Apostle before the Last Supper to have that unique quality -- and giving each major director his autonomy will guarantee this. Then, to convey the manner in which each Apostle will act out his own ministry, the individual films will be blended using more of a documentary style of editing. And as far as we can glean, each of the chosen Apostles had a rare destiny. It is like a game of poker -- each player comes in to the game, and is dealt his hand of cards. How does he play them? How did each Apostle play out his destiny dealt to him by Jesus? I am not a poker player, but the game can be fascinating to watch.

Starr: In the photograph you sent me you are presenting a gift to Pope Francis. How did that meeting come about? Did the Pope comment on your film project?

Acosta: I was invited to attend the inaugural mass of Pope Francis, which was one of the most powerful moments of my life. We were subsequently invited to have a private audience, wherein each of us would have our individual moment with the Pope. I thought, what better moment could there be to bring him a gift of a bas-relief of Leonardo's Last Supper! I asked and received his grace and blessings for this film project.

Starr: What is the current stage of development of the film?

Acosta: My main concern, as it has always been, is to bring together the most artful and professional cast and crew; a loving and supportive team to create such a work of artistic passion. The script and film score are in preparation, and although I am not at liberty to mention his name, I am about to bring on board one of the great screenwriters of our time. There is an old Hollywood adage in the film industry, "you must know your subject." This most talented and gifted writer knows about greatness.

Bernard Starr is a psychologist, college professor, and journalist. He is author of "Jesus Uncensored: Restoring the Authentic Jew." Website: click here.