One of the main themes of my new book, Right Is Wrong, is the role the media have played in allowing the lunatic fringe now in control of the Republican Party -- the people who believe in torture but don't believe in evolution -- to hijack our democracy. I document how the real problem comes not from Fox News or the likes of Limbaugh and O'Reilly, but from a mainstream media that has so internalized the Right's framing and messages they have now become a part of its DNA.

The first of the latest round of exhibits proving that the Karl Rove playbook has become the MSM's bible was offered into evidence during last week's ABC debate. The uproar that followed made it seem as if this kind of behavior was an aberration but, in fact, this has been going on for years -- only in a less concentrated form.

Next came a double-whammy in Sunday's New York Times. First up was David Barstow's epic revelation of the unseemly complicity between the Pentagon and the mainstream media in delivering the Bush administration's talking points on Iraq via "a kind of Trojan media horse" -- Pentagon-approved, prepped, and financially-enriched "military analysts" dutifully parroting the Bush party line, with nary a raised eyebrow from the TV stations and newspapers offering these highly-decorated sock puppets their prestigious platforms.

It was -- and, indeed, continues to be -- a propagandists' field day. And while the moral bankruptcy of the "military analysts" -- many of whom now admit to promoting "facts" they knew to be untrue -- is astounding, it is more than matched by the bankrupt behavior of the media mavens who enabled the Pentagon disinformation campaign. Barstow paints a picture of TV and newspaper execs turning a blind eye to the conflicts of interest their analysts were drowning in. And now they are going mute: many of the news organizations Barstow contacted for his story -- including CBS, Fox, and NBC -- refused to comment, while others offered up half-hearted mea culpas. "We did not ask ... the follow up questions we should have," said CNN.

As David Bromwich put it in an email to me: "The cavalier attitude of the networks is astonishing. No system but despotism can survive when so many high up do such things without embarrassment."

The second blow delivered to the media in Sunday's Times was the article about how American military commanders in Afghanistan have been urging a widening of the war to include going after terrorists in the tribal regions of Pakistan. But they have been rebuffed by the Bush administration, despite the fact that these terrorists, including members of al Qaeda, present, in the words of CIA director Michael Hayden, "clear and present danger to Afghanistan, to Pakistan and to the West in general, and to the United States in particular." So much for Bush's endless bleating about listening to his commanders in the field. Once again, the White House's obsession with Iraq has caused it to take its eye off the real threats facing America.

But where is the hue and cry from the rest of the media? Just as the media gave Bush a free pass and allowed Afghanistan to fall off the radar screen, it is shockingly silent on this latest outrage. Too busy thinking up the next lapel pin or Weather Underground gotcha? Will we look back on this after the next terrorist attack and hear the inevitable milquetoast admission: "We did not ask the follow up questions we should have."

And while we are on Afghanistan and the lack of follow up questions, it will be interesting to see if the media allow Hillary Clinton to get away with refusing to explain what she meant when she said (on a tape obtained by HuffPost) that she didn't agree with MoveOn.org's positions on foreign policy and national security. Our Sam Stein tried to get her campaign to elaborate on her comments, but they refused. They also refused to comment on why Hillary had repeated the lie -- articulated most notably by Karl Rove -- that MoveOn was against intervention in Afghanistan after 9/11.

So it's not only the media that have internalized the Right's framing and messages -- but also many of the leaders of the Democratic Party. More on that here...

The Toxic Thinking of the Right Infects the Body Politic 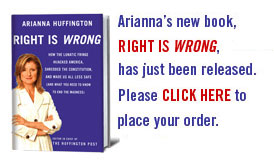