In the 1950s and 60s, security within the U.S. government, including the State Department, was on high alert for internal risks, particularly Communists and what were considered to be sexual deviants -- homosexuals and promiscuous individuals. Investigating homosexuality became a core function of the Department's Office of Security, which ferreted out more people for homosexuality than for being a Communist.

In 1950, a subcommittee chaired by Maryland Senator Millard Tydings convened to investigate Joseph McCarthy's notorious list of "205 known communists." Tydings worked to discredit McCarthy's claim, but, in the process, the subcommittee concluded that the State Department was overrun with "sexual perverts," part of the so-called "Lavender Scare."

During the hearings, Nebraska Senator Kenneth Wherry memorably claimed that as many as 3,000 homosexuals were employed at State. By the end of 1950, 600 people had been dismissed from positions at the State Department on morals charges. In 1973 a federal judge ruled that a person's sexual orientation alone could not be the sole reason for termination from federal employment; two years later, the Civil Service Commission announced that it would consider applications by gays and lesbians on a case-by-case basis.

Read Russell Sveda's account of his decade-long lawsuit against the Department after it withdrew his security clearance for being gay.

"Homosexuality in the Service has always been a problem"
Norman V. Schute, NEA (Near East Asia Bureau) Administrative Officer, 1958-1961 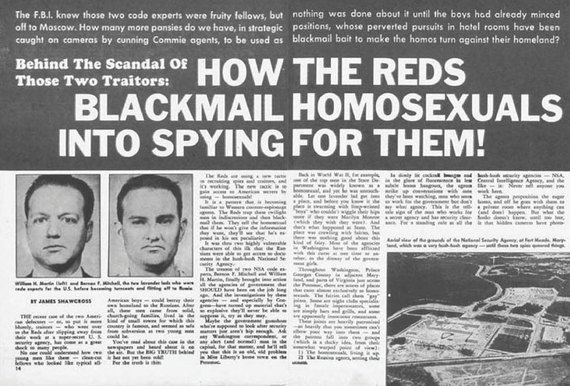 SCHUTE: Homosexuality in the Service has always been a problem. I voice no personal opinion on this. Basically, officially it is believed that homosexuality can lead to the compromise of U.S. Government security.

Both German and Soviet intelligence use homosexuals to establish a close relationship with homosexuals in other countries' services including our own. Those who cohabited on the outside were developed into informants by their lovers.

Others were or were likely to become targets for blackmail and thence informants. "Traitor" is another term used for it. Back in 1946 as I recall, [someone] had to inform Secretary of State Cordell Hull that a very senior officer had been arrested for pederasty [homosexual relationship between an adult male and a minor male] in Lafayette Park [near the White House].

In Rome, two of my colleagues after interviews confessed and were released from the Service. Three members of the original Foreign Service Security group were reported to be deviants and on interview were promptly released.

And in 1947..., Foreign Service Chief Inspector Merle Cochran, later an Ambassador, sent home seven communications personnel, a veritable "daisy and chain" as it is known. And that's the way it is, or at least was, in my day.

"'How many homosexuals has the Department fired this year?'"
Robert J. Ryan, Sr., Assistant Chief for Foreign Service Personnel, 1953-1955

That was a usual question, so it was a matter of public knowledge each year of how many people left the State Department because of allegations of homosexual activities.

The Security Office actually had one guy, John Finletter, who spend his full time following up allegations of homosexuality among the employees of the Department.
Joseph C. Walsh, Director of the Security Office, 1953-1957

WALSH: The standard of measurement, our bible, was Executive Order 10450 issued by President Eisenhower shortly before our Agency was formed in 1953. The essence of this Order related to Federal employees as affecting the country's National Security -- denial of such employment was spelled out to include anyone associated with communism, homosexuals, drunks and other social aberrants who might be considered threats to the security of the USA.

There were, within our Agency, extremely few individuals (employees or applicants) who were denied security clearance due to their association with communism, or its organizations. By far, the major shares of the total number were those admitted homosexuals.

It was a nasty business, seeking out and identifying people suspected of homosexuality. Disquieting features to me -- there were several awfully decent and intelligent people who worked within the Agency whom I got to know well and enjoyed working within the Agency programs who, suddenly and peremptorily, dropped out of the picture -- disappeared! Under investigation, they had admitted their homosexuality and had resigned.

"The whole idea was to develop information so that you could confront the individual. Then he would resign."
Charles Anthony Gillespie Jr., RSO, Manila and Jakarta, 1965-1966

GILLESPIE: I learned when I came into security affairs that there were two sorts of secret or highly sensitive, investigative units - or maybe it was one unit with two parts in the State Department security system. One of these units had to do with real, honest to God, counterintelligence....

Either a separate unit or a part of the same unit dealt with nothing but homosexuality. I remember the first time that when I went into that unit and talked to two or three of the people assigned, I felt almost intimidated myself. They were briefing me on the unit's activities. There were special code words for the special kinds of investigations. These were formal investigations.

We use a code word system today on the distribution of sensitive policy messages. We have "NODIS," which means "no distribution outside the State Department." These security units also used "NODIS CHEROKEE," "NODIS GREEN," and so forth, which meant that the message dealt with a particular subject. It could involve China, and so forth. In any event, in the security investigative area, communications were labeled. I don't remember quite what the label was, but a certain label meant that it concerned a homosexuality case. 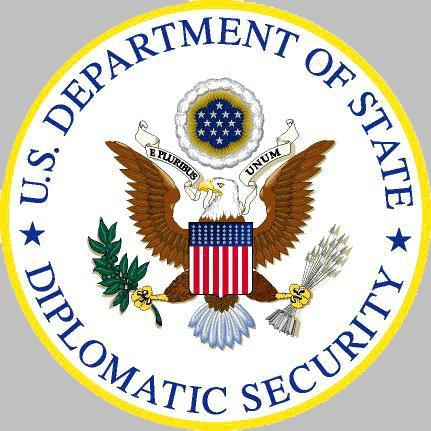 The whole idea was to develop enough information so that you could confront the individual and get him to agree that he was a homosexual, if that was what you believed. Then he would resign from the Foreign Service. If he didn't resign, you would pull his security clearance.

It was a little more precise than [looking for somebody who was unmarried or talked with a lisp], although those factors were never far away, because I think that people believed in those days, as they probably have for some time, that in terms of our ethic in the United States, you could probably identify people like that. They were visible if you just looked hard enough.

What I was told when I was briefed in this unit was that I should try to find out whether there were any homosexual hangouts, e.g., nightclubs at my post.

If I heard of anybody from our mission who hung out at these places, I should immediately take the following steps: find out what they were doing at one of these hangouts. Was the allegation really true? If it was true, they told me, notify us, and we'll open a case on the person concerned. So that was it, and this unit would undertake follow-up action.

When you did a background investigation on someone or you were updating an investigation on a Foreign Service Officer -- let's say, age 43 or 44 -- who had never been married, you were enjoined to make sure that you asked all the right questions which would cover what we today would call sexual orientation. The question might be asked, "Why isn't he married?" "Does he go out with women?" Really subtle, penetrating questions like that -- just as we used to ask questions about drinking.

When I first started in as a Security Officer, questions on drug use were practically never asked. I left the security area in the late 1960s when questions about drugs became very important. Investigations of homosexuality were very important matters. They were big deals.

I don't think that the homosexuality issue would ever have loomed large in most people's minds. However, for many of them it was a distasteful area...

The idea was that if an individual engages in any behavior which is prohibited by his social or cultural group, and does it surreptitiously, knows that it's wrong, by that very fact he or she is now susceptible to pressure. That was the whole theory of it.

Now, I will be very blunt and say that I detected, as a human being talking to other human beings -- and this is an intuitive kind of judgment -- that there were some people who were firmly and solidly convinced that certain kinds of behavior were not only wrong but abominable.

They considered that this kind of behavior should be ferreted out and eradicated. Some of the people holding those views were certainly in the State Department security system at this time. I think that they gravitated to charges of this kind.

The belief at that time was that if your sexual orientation was other than heterosexual, you could be co-opted, recruited, blackmailed. Unfortunately, during the early periods that I was in the Foreign Service, people didn't have that many rights. If the Department chose to turn you down for a position, the ability to get equal treatment under the law was not guaranteed... 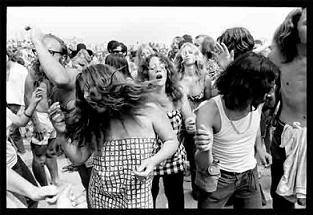 The period of free love, the period of Haight Ashbury and Woodstock and free expression sort of helped us become who we later were. There was a lot of jaundiced eye looks at people even if their academic background was good and they scored well on the Foreign Service exam and did well on the orals and what have you.

When they got to the point of getting the clearance, that became a very unpleasant experience. There were no real guarantees of what could and could not be asked. If you were asked, "How would you describe your sexual orientation," quite often people that were raised in the '50s or '60s would not lie, they would simply tell the truth.

We'd always been told that if you tell the truth, how can you be wrong? Well, in telling the truth, you end up not being hired.

If a person said they were homosexual, that usually meant terminating the interview, documenting what had been said, and that would be reviewed by a higher authority. Usually, a woman that was living with someone was viewed very negatively. A woman who was divorced was almost looked at as a prostitute in some circles within the old SY organization.

It was a very black-and-white environment