A number by itself can't express more than its numeric value, however, when numbers are compared to one another, they can tell a story.

In a post-"Lean In" age, measurement is the empirical tool that guarantees a path toward workplace diversity. Why? An industry can't know where it's going if it doesn't know where it started. Measurement holds companies and leaders accountable, and the data serves to teach us how to reframe problems and solve these complex, cultural issues.

Data demystifies assumptions around what we think we know regarding women technologists and their status in the industry. With data from the 2015 ABI Top Companies Initiative, we can see where the industry is making progress and where the problems continue to persist.

While many industry executives continue to point at the education pipeline and lack of girls and young women studying computer science as the problem, research shows a leak in the pipeline of women already in the field. This insight isn't apparent when only looking at the total percent of women in technical roles, or within the tech companies overall.

The Grace Hopper Celebration, Girls Who Code, and universities like Harvey Mudd are cultivating the next generation of female technologists, and while this helps increase the pipeline down the road, the industry doesn't have to wait to reach that horizon.

We can do something today.

The Top Companies Initiative reveals three data-backed insights that prove promoting from the industry's current talent pool of female technologists can cut down on attrition and encourage a more diverse industry for today and the near future.

There is progress in absolute terms but no change in the industry percentage. In 2015, we examined the performance of companies that included over 439,000 people in the U.S. based technical workforce, with women representing 21 percent. From 2013 to 2014, the absolute number of women in that technical workforce increased by 3500, but the companies represented have hired more people overall, in the end resulting in no change to the male to female ratio.

A significant glass ceiling still persists for women in technical roles due to obstacles that block them from promotion and advancement.

Meritocracy is at the heart of tech's belief system, but the numbers tell a different story. Unconscious bias and working conditions have prevented female technologists from being promoted at the same rate of their male counterparts.

Few women seem to get past mid level technical positions. Once their careers stall, these women get discouraged and leave the field, seeking places where their capability and efforts are rewarded. This robs the industry of the role models and diversity that it needs. From entry level to executive level there's a 50 percent drop in the average representation of women technologists, representing a significant loss of technical talent that the industry can ill afford. Why are women leaving tech in droves? 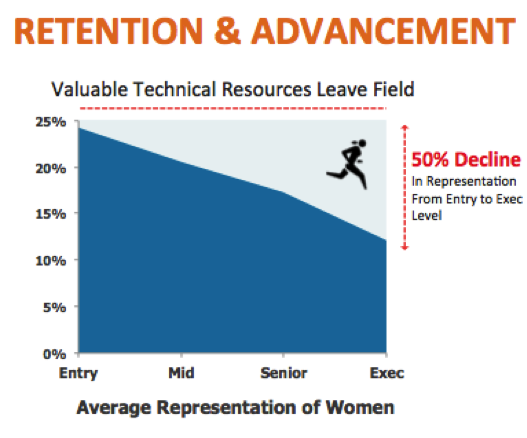 A study that included over 1,000 women who worked in engineering, and then left the field, cited the following top reasons for leaving their jobs:

The reasons are pervasive and hard to pin down. Perhaps this attrition can be attributed to the fact that one out of three women in STEM have experienced sexual harassment at work, or that as research has shown men are promoted on potential while women are promoted on accomplishments. Women in technical roles constantly run into stereotypes that exclude them and face significant isolation in their jobs.

According to a Harvard Business Review study reporting the same attrition rates, the reasons vary from a "hostile" male culture, sense of isolation and lack of clear career path. Overall, women in computing know that the issues holding them back are subtle and difficult to confront. 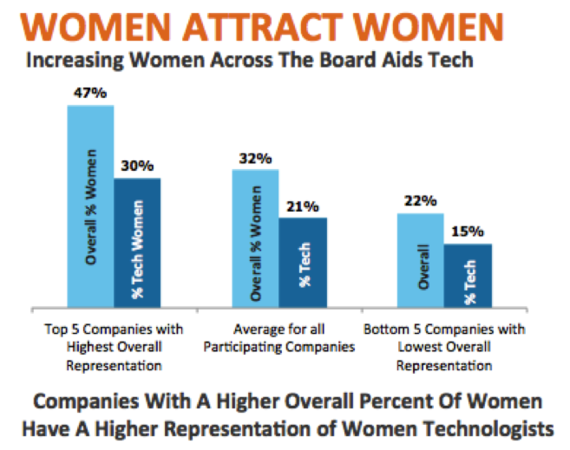 Measurement will continue to be required to improve gender diversity, but this push for industry accountability is really about innovation and business performance. Fostering and advancing the best talent from all types of backgrounds will keep businesses competitive.

As organizations like Anita Borg Institute, Girls Who Code and universities prepare our future technologists, today, companies can more immediately retain the talent in the industry by staying accountable to the data, advancing the female talent they do have and creating hospitable environments for diversity to thrive.