Disney has the most popular amusement parks in the world, and their ticket prices reflect it. A 1-Day adult ticket to Walt Disney World's Magic Kingdom in Florida costs $105, and the same ticket to California's Disneyland is $99. With prices that high, families need to make the most of their money. Here's a secret, for the past three years there's one day at Disney that's cheaper than all others. The Friday of Memorial Day Weekend (May 22, 2015), both Disneyland and the Magic Kingdom are staying open for 24 hours straight - bringing your average ticket cost down to less than $5/hour. That's almost the same as your average movie these days! OK, my tongue is placed somewhat in cheek regarding Disney's least expensive day, but if you can make it, there's no doubt you'll make the most of your money. 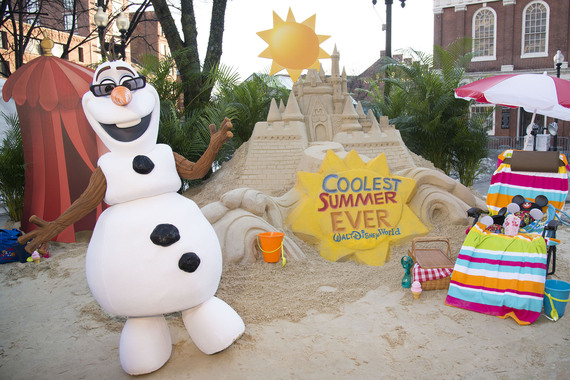 Walt Disney World Resort kicks off the summer season with 24 hours of nonstop fun during a special event May 22-23 at the Magic Kingdom, hosted by Olaf, from Disney's FROZEN. The Magic Kingdom will be open 24 hours to guests from 6 a.m. to 6 a.m., Friday May 22 to Saturday, May 23. On the same day over on the west coast, the 24-hour party will kick off Disneyland's 60th Anniversary Celebration, and visitors can enjoy the premiere of three, new nighttime spectaculars: "Paint the Night" parade, "Disneyland Forever" fireworks, and "World of Color - Celebrate! The Wonderful World of Walt Disney." 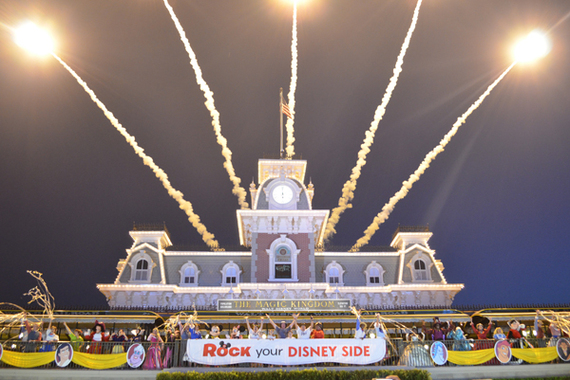 If you've ever wondered what it was like to hide out in the Magic Kingdom late at night, my daughter and I attended last year's 24 Hour "Rock Your Disney Side" Party at Walt Disney World's Magic Kingdom. We arrived at the Magic Kingdom with the bleary-eyed crowd at 5:50 a.m., watched the welcome show, fireworks, and the mad rush through the gates where we were treated to a magnificent sunrise on Main Street U.S.A. 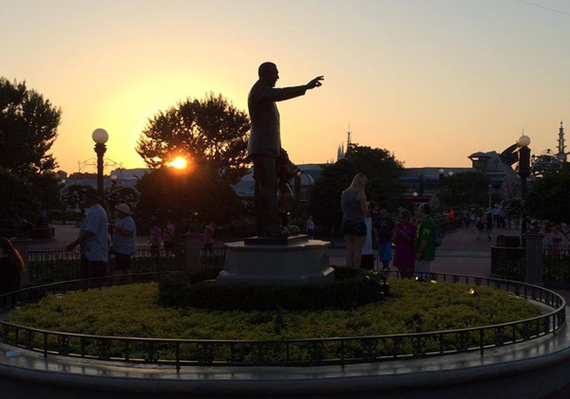 The early morning hours were a fantastic time to get a number of attraction rides under our belt including The Many Adventures of Winnie the Pooh, Mad Tea Party, Buzz Lightyear's Space Ranger Spin (2X), Astro Orbiter, Tomorrowland Transit Authority PeopleMover, Space Mountain (3X), and Dumbo the Flying Elephant. Dad needed a break after getting shaked, rattled, and rolled on so many rides all before 10:00am. We slowed it down, got a snack, and found a spot for the Festival of Fantasy Parade and its Steampunk, fire-breathing, Maleficent dragon. 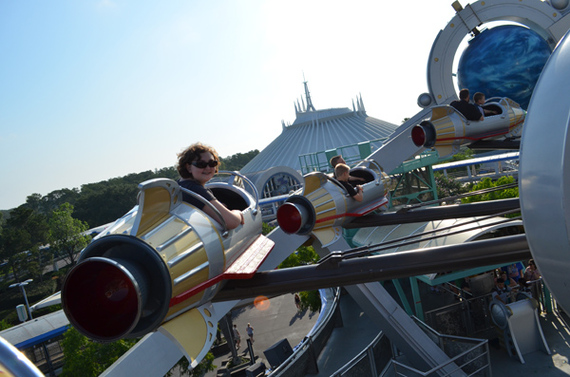 We left the park after the parade, to take a break from the afternoon sun (the temperature topped 100 degrees that day). We went back to our room, took a much needed nap, and cooled off. In the evening we returned refreshed and ready to ride - off to Adventureland for Pirates of the Caribbean, Jungle Cruise, and Magic Carpets of Aladdin. DJs hosted dance parties at Cinderella's Castle and Frontierland, and Disney characters joined the party dancing away in their pajamas. Another advantage of the late night/early morning hour - no line for a Dole Whip Float at 5:00 a.m., so we grabbed two for our breakfast treat (it's fruit and juice, right?). One last ride on Walt Disney's Carousel of Progress (since it now was a Great Big Beautiful Tomorrow) and it was time to head out. Mickey, Minnie, Donald, Chip and Dale gave us a "kiss goodnight" (perhaps good morning was more appropriate) from the Walt Disney World Railroad Main Street station, and the Magic Kingdom's 24 hour party was over. 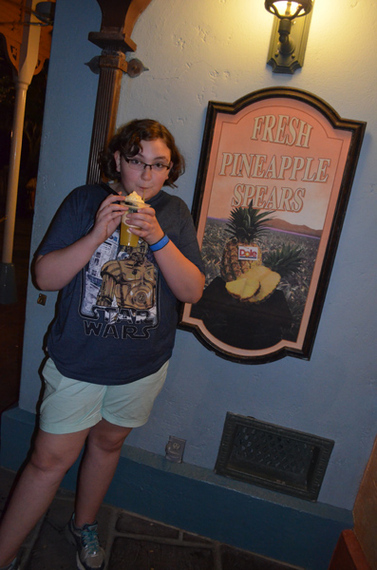 Yes, Disney magic comes with a price, and with tickets to the Disney Parks hovering around $100 their 24 hour parties offer families a chance to maximize their vacation dollar. During our time at the 2014 Magic Kingdom "Rock Your Disney Side" 24 Hour Party we experienced nearly 30 rides and attractions. We may not have spent all 24 hours in the park, but we certainly got maximum value for that 1:1 time together.

If you'd like more details and photos from the 2014 Magic Kingdom 24 Hour Party, check out this post on Adventures by Daddy.