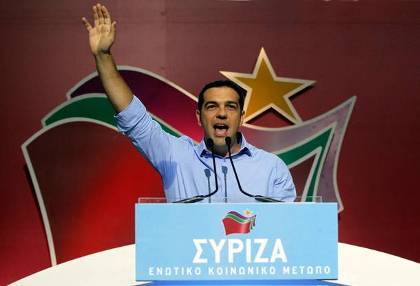 Bold prediction or extreme scenario, the fact is that Coalition of the Radical Left, or Syriza, will win the January 25th elections in Greece. And I will go out on a limb here and say that it will do so with an impressive difference over New Democracy, a party that as an administration political party in Greece for the last three or four years faithfully followed the directives of the European Union, the European Central Bank, the International Monetary Fund, and, for some, those of German Chancellor Angela Merkel herself.

What is Syriza, a party led by a forty-something male that states he is an atheist, whose political rise sends shivers through the markets and the EU leadership and revived the 'Grexit' bogeyman?

Syriza, now an independent political party, was established a decade ago as a coalition of several sociopolitical forces ranging from the radical anti-capitalist far-left to more moderate environmental and feminist groups. During this period, Syriza unofficially assumed the mantle of the hardline anti-bailout mass movement which became the main driver of its surge as the recession and austerity cut deeper into Greek society. Opponents blamed Syriza of fomenting riots, implicit tolerance and even support of terrorist groups, and having a secret agenda for removing Greece from the euro and returning it to the drachma. Many people shrugged off these claims as groundless. What's certain is that they were never proven.

Voices from within Syriza's own ranks had a key part in fostering these claims. But this was only natural given Syriza's roots as a political collective aimed at bringing these divergent views together under the umbrella of the left.

Syriza's leader, Alexis Tsipras, kept an admirable cool throughout this, showing restraint and moderation in the face of these claims. This may have been aided by the fact that any extreme positions were voiced by more junior party members, perhaps as trial balloons of public opinion. Tsipras's own views were mild and reasonable, reiterating that the party position was to remain in the eurozone and seek to renegotiate Greece's debt and borrowing terms.

So what is it that terrifies Europe's political status quo and leaders? Is it the word 'Left' and that its rise could become a Greek example? Is it the palpable disagreement at society's grassroots with social policy and how it's being implemented by the EU mechanisms? Is it the emerging political trend expressed by Syriza and its counterparts in other countries, like Podemos in Spain?

Will Alexis Tsipras and Syriza take Greece out of the euro, touching off a global economic upheaval? Will they dare nationalize the Greek banks and other former public companies privatized in recent years, creating the perception that the economic crisis was the perfect opportunity for speculators?

I recall campaign promises made by Andreas Papandreou and the Panhellenic Socialist Movement (PASOK), which expressed the center and moderate left when it first rose to power in 1981. "EC and Nato are the same syndicate". "American bases out of Greece." Andreas Papandreou helped fan strong anti-American sentiment in Greek public opinion while strengthening Greek bonds with the Arab nations, exemplified in his famed personal friendship and support for Palestinian leader Yasser Arafat. As a result, a country in which religious tolerance was effectively non-existent and the Orthodox Church had decisive political sway, found itself oriented towards peoples of an opposing faith and away from the West, to which it essentially belonged.

But what of all this was implemented in the ensuing decades by a party that dominated Greek politics for decades? Nothing. Greece remained a member of the NATO alliance and the EC, which became the European Union, and eventually a member of its common currency. Bilateral relations with the U.S. are very good and Greece serves Western interests in the regions in various ways.

So what does the EU and the West have to fear from a left party and its leader, especially when he remains moderate and states his desire to retain Greece's European orientation?

There's a Greek proverb that says a dog that barks, doesn't bite. Was perhaps Andreas Papandreou that dog and perhaps Tsipras is the one that is ready to bite?

Ultimately, is it the rising popularity of left parties that European leaders should fear? Or should they be more afraid of their own inability to understand the need for a new social policy in most EU countries? And is it this inability that is driving Europeans' votes?

For the EU chapter titled "Greece", we'll have some answers on January 26th when Syriza wins the elections and is given the mandate to form a government.