Hi. I'm Pillar Man... no wait, first a spoiler alert -- if you haven't watched Season Two of HBO's The Leftovers, you should seriously consider stopping here, taking ten hours to watch the full season, then resume reading with:

Assuming at this point that you've taken my advice and watched at least some of Season Two, you now know Pillar Man as that disheveled, bearded guy who lives on top of a tall pillar in the town square of Jarden, Texas, aka Miracle National Park. In Season One of The Leftovers, which was set three years after 2% of the world's population suddenly vanished, the show explored the loss, despair, crumbled lives, religious cults and general societal crush among those left behind. In Season Two, the main characters have relocated to the little town of Jarden, the only town in the world where no one disappeared.

Like much of the show and the characters in it, the very noticeable but only sometimes important Pillar Man is a mystery. When we first see him, we might assume he's a religious nut, some kind of moral overseer, or perhaps he's a prophet watching for the end of the world. The possibilities are endless. Welcome to The Leftovers. Where the many possibilities are endless. 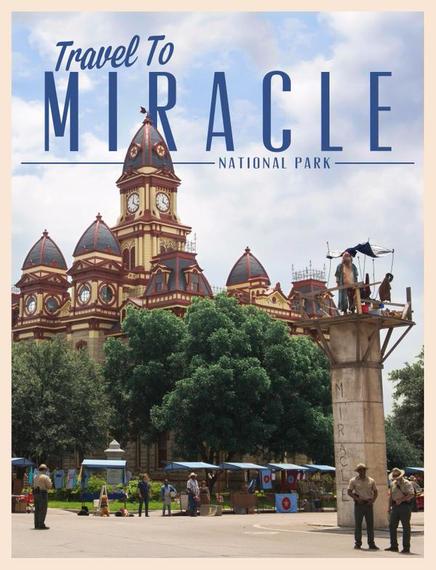 When I first heard that HBO's wild, wonderful and sometimes distressing series was moving to Austin for its second season, I was hopeful I'd get a call to audition for a role. But hoping for a casting call is a far cry from getting cast. As any actor will tell you, a lot of your auditions are for parts you're not really right for. In my case, I'm 6'7" tall, an advantage for a few roles and a big disadvantage for many more. I still remember Louis Malle's lovely apology to me when he was casting his film Alamo Bay.

"I want you in the scene with the Vietnamese fisherman," Louis told me in his beautiful French accent, "but he is small and you are tall, and no matter how I try, the two of you will not fit into the same frame."

So imagine my delight when Austin casting agent Beth Sepko asked me to read for Pillar Man. A character standing atop a tall pillar adorned with the single word "MIRACLE" was a role well suited to my stature.

I also hoped my recurring role in a previous HBO series might help my odds for the part. After all, the character I played in HBO's epic series The Sopranos was both a narcoleptic and born-again. "Have you heard the good news?" my character Aaron Arkaway said during the Sopranos family Thanksgiving dinner. Come to think of it, I am often cast as a religious figure of varying degrees of sincerity -- the leader of The Esoteric Fellowship in last year's indie film, Divine Access; and the year before in the TV movie Deliverance Creek as a Quaker Preacher who is hung for aiding escaped slaves. 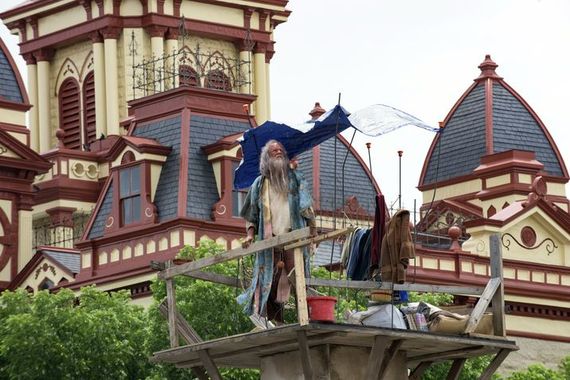 I only had four episodes in the Sopranos, but working with James Gandolfini and team was such a great experience that when I was cast as Pillar Man, it never occurred to me that The Leftovers could top my last outing with HBO. But as we can hardly help notice, television storytelling in the past decade is leaping ahead in amazing ways. Ten-episode seasons combined with the ability to binge-watch the full arc of a show now make it possible to tell stories with amazing nuance, complexity and risk. One of the many beauties of The Leftovers is the extensive trust the creative team puts in the each of those concepts. There is beauty in unexplained mystery, a philosophy that offers different answers to different viewers -- especially when you are dealing with -- as Leftovers author Tom Perrotta puts it "the anxiety of the human condition."

Abandoning the long television tradition of answering all questions can be a beauty of its own. Will we ever really know why two main Leftovers characters -- played by the wonderful actors Carrie Coon and Regina King -- throw rocks through each other's windows? Maybe not.

Will we know why no one seems to mind a crazed farmer slaughtering goats in public places in Jarden? Or why a woman gardens while wearing a white wedding dress? Actually, thanks to an veritable explosion of information from Regina King's character in episode 208, we do learn what that both of those are about.

As the new season unfurled, viewers have wondered if we'd learn what happened to the three girls who seemed to have disappeared into the earth? And we wondered how someone who never speaks can die and be buried in a shallow grave in Season One, then have her come back from the dead as a some kind of ghost who never shuts up?

Those who've been watching the series seem to be watching with passionate interest -- witnessed by the buzz on social media and glowing media reviews. This Sunday is the airdate of the final episode of Season Two. Will all our questions be answered? Since I am shown script pages only for the scenes that Pillar Man appears in, I know little more than any other fan. And though many questions have been answered and more answers will likely be known on Sunday, I suspect that Executive Producer Damon Lindelof and his creative team have no intention of answering all your questions.

One thing I am sure of is that Lindelof wants viewers to know that credit for this much-lauded season does not belong to him alone. There are many talented writers, producers, directors, cast and crew working on this series. So when I say Damon Lindelof in relation to most things about the show, what I mean is "watch the credits." 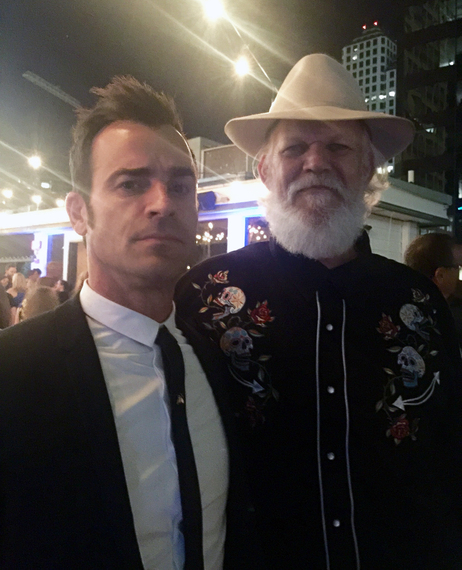 At a season premiere screening and wrap party in Austin, a big crowd of cast and crew were celebrating side by side. The evening was full-on joy, and everyone from execs Lindelof and Tom Perrotta all the way to hair and makeup keys Carla Palmer and Roxie Hodenfeld (keys to Pillar Man's hirsute ways) were raving about the experience of shooting the series. The LA team could not quit talking about the extraordinary Austin crew, and the Austin crew returned the favor regarding the look, feel and power of the scenes we'd created as a team. Creative serendipity had occurred -- many seemed to think this the greatest production experience they'd known. After 30 years as an actor, writer and director, I've never before been blessed by that particular emotion.

While many viewers have been enthusiastic about the show, I've also noticed many different takeaways from this season. Some have their minds blown, some are perplexed; some are challenged, some depressed, but almost all of them are intrigued by the almost endless possibilities of a well-explored underlying premise, "what if?"

I don't know of any other show with a central tenet built around questions of religions, spirituality, skepticism, mysticism, loss, love and family. Each of those concepts present risk. Taken as a whole, Lindelof and team go out of their way to court risk. Perhaps they recognize risk as an essential component of originality.

So what about Ann Dowd's amazing character Patti Levin? And what about those dead people I mentioned? In Season One, Patti was the silent and sometimes violent leader of The Guilty Remnant, and ultimately the tango-to-her-death partner with Justin Theroux's tormented character Kevin Garvey. Fans bemoaned her loss from the show, but from the bottom of her grave, Patti returned in Season Two as Kevin's tormenter and conscience, a demeaning dybbuk seeking acknowledgement from a man who knows she is not real.

As the production came to a critical scene late one night, from the top of my pillar I witnessed the marvel of Justin Theroux, Ann Dowd, director Tom Shankland and cinematographer Todd McMullen as they created the physical version of a demanding scripted scene -- weaving as a group of four through the eerie set which looked in the darkess nothing like our home-base town of Lockhart, Texas and everything like an empty Miracle National Park. Round and round my pillar they wandered, exploring distance and proximity, darkness and darkerness, drawing ever nearer to a fulminating conclusion in Kevin Garvey's mind that either his mind or the world around him was completely insane.

With the blocking done and a few strategic lights hung high in the air, cameras rolled and Pillar Man was drawn into their reality, watching silently from on high till Patti Levin wandered away singing a haunting verse of "Never Gonna Give You Up." Then and only then did Pillar Man come into the scene, called down to a bewildered Kevin who was convinced he'd had a long and self-destructive conversation with no one. "Who's your friend?" asked Pillar Man.

Did I mention that I see dead people?

There is risk in conversations with the dead; risk in drinking unknown poison. Risk in questioning religion; risk in trusting it. Risk in trying to build a family from shattered people. But whether you work on The Leftovers or just watch it, Damon Lindelof's risk is our gain. And when I say Damon Lindelof, I mean, don't forget to watch the credits.

Have you hear the good news? The finale of Season Two of The Leftovers premieres this Sunday evening, December 6.