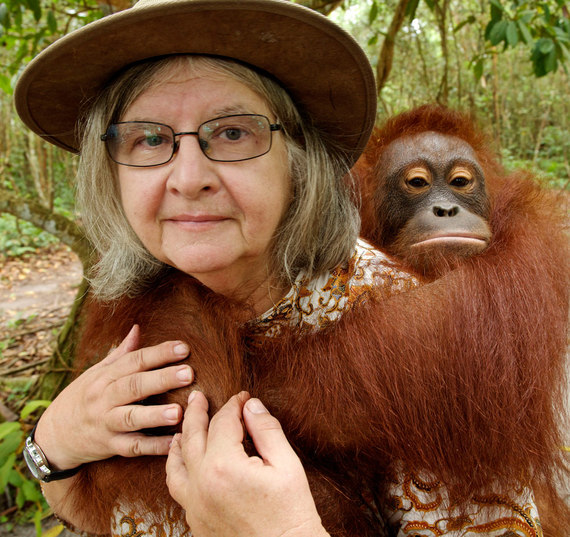 Dr. Biruté Galdikas, the world's foremost researcher and protector of orangutans in the world at her Care Center. These lovely animals really relate to her in a profound way.

I finally have met the third person connected with one of Dr. Lewis Leakey's greatest legacies. He had personally chosen three women to spearhead field research on primates, as he believed they were key to understanding the mysteries of human evolution. He referred to the women as the Trimates. Each one -- Jane Goodall (chimpanzees), Dian Fossey (gorillas) and Biruté Galdikas (orangutans) -- became the super-stars of their field.

I had only met Jane Goodall at a cocktail function, although I did spend time in Gombe Stream National Park where she did her ground-breaking work. I met Dian Fossey in 1976, and spent some time with her, while Kenyan filmmaker Simon Trevor and I worked on a World Wildlife Fund film about forest destruction in East Africa.

I met Dr. Biruté Galdikas on a hot afternoon this past August when our rather ancient Trigana Air 737 landed in Pangklanbun, Borneo. We were 14 friends and family. It had been quite a trek to get here and, by the look of the airport terminal, we were most definitely not in Kansas anymore.

I felt deeply moved at meeting her, that she had made the effort to come to the airport, that she was taking her time to be with us for the next three days. The idea that a person would dedicate their entire life to understand and protect a single species is remarkable, and the people who have chosen to do that have a rare and unique character. One feels a certain sense of awe in their presence. 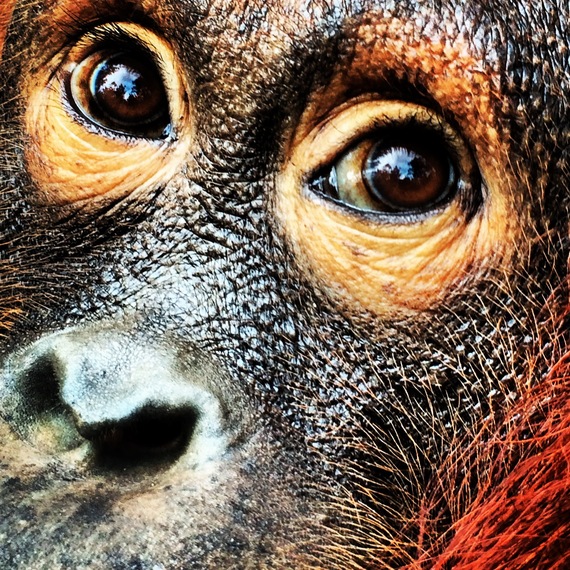 These faces, are irresistible. I've been told that we share 97% of our genetic makeup with orangutans.

In any case, Dr. G. (it was suggested that this was an appropriate reference) laid out the rough plans for the next days and, while waiting for our luggage, talked about the visit the week before of President Clinton who had come with a group of donors to the Clinton Global Initiative to see first-hand the orangutans threatened by forests rapidly disappearing due to logging and palm oil plantations.

Clearly she was very pleased about his visit. Her perceptions of President Clinton were precise, from his grasp of information, to how he engaged, to how he radiated empathy. It was as if Clinton were an orangutan being studied.

We took a short drive down to the Kumao River, boarded two klotoks, (traditional river transport boats), and headed up a tributary to Tanging Haropen, one of several feeding stations. These are places where wild and rehabilitated orangutans can come for a reliable feeding. This is especially important in the dry season when wild fruits are less available.

For the next two hours we observed these magnificent animals. Mothers with babies, juveniles playing, feeding and climbing up and down the surrounding trees. You didn't know where to look at times -- activity was all around you.

Orangutan Care Center in Pangkalan Bun, Borneo. Spent a day and a half amongst juveniles and infants with Dr. Galdikas who has spent the last 43 years studying and developing strategies to save orangutans from going extinct.

After a hotel overnight, we woke early the next day to head several hours upriver to Camp Leakey. The river ride was wonderful: we spotted proboscis monkeys, gibbons, flocks of hornbills, as well as large solitary kingfishers. Dr. G., followed by a couple of orangutans, met us on the trail. Her house at Camp Leakey had lots of activity around it: orangutans sitting on her porch eating fruit and workers inside. "Some rambunctious fellows got inside while I was gone and had a party" she said. "Quite a lot got damaged." Was she annoyed as one might be with a child who had done the same, or amused? 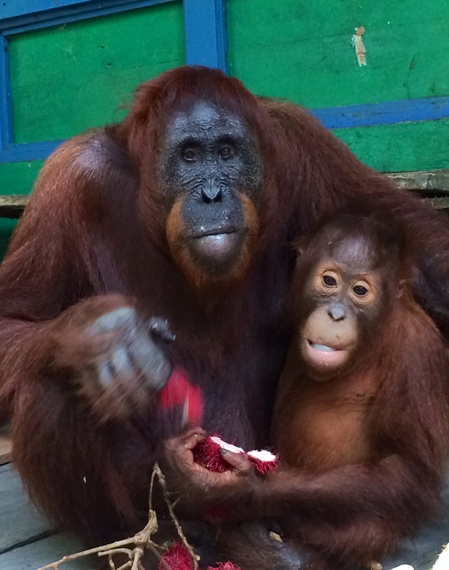 Orangutans feeding on the porch of Dr. Galdikas' house in Camp Leakey. Evidently a bunch had gotten inside while she was gone and ransacked the place. All in good fun as they can be quite rambunctious.

It was quiet when we got to the feeding station. But in fairly short order individuals appeared from the forest to provide another spectacular encounter. Dr. G. sat on a small bench and seemed to delight in watching us as much as the orangutans. I believe our enthusiastic behavior and expressions would be quite amusing if caught on film. Everyone was behaving normally except us.

We headed back down river as the sun was setting. We had witnessed "the old man in the woods," the Malay translation of orangutan. And nothing that remained of the day could hold a candle to the experience we had been so privileged to have.

Follow Sven Lindblad on Instagram, and if you're inspired to visit the orangutan infant care center and the region of Borneo protected by Dr. G and Camp Leakey, join us here aboard National Geographic Orion for Wild Encounters from Borneo to Bali.