They look invincible-with their built-in body armor and their enormous bulk. But giant tortoises, the very symbol of the Galápagos, are among the most devastated creatures on the islands. 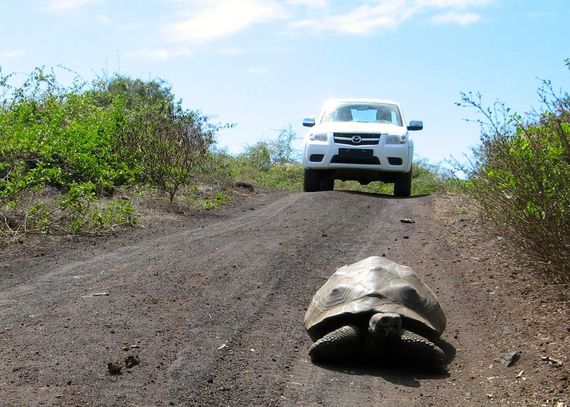 The principal icon is Lonesome George, the last of the now-extinct Pinta Island tortoises. His preserved body will go on public exhibit Friday at the American Museum of Natural History in New York and remain there until January when he is slated to be returned to Ecuador. 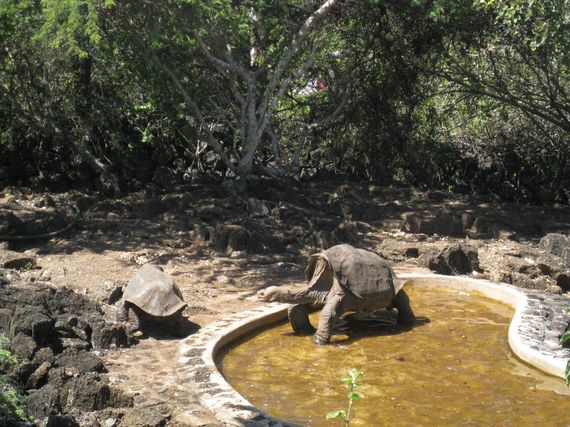 Lonesome George in his pond in 2010
Cecilia Alvear/Galápagos Digital

George had not yet been discovered on Pinta when the Galapagos National Park Service and the Charles Darwin Foundation first reviewed the tortoise populations on the archipelago in 1959. They found that only 11 of the 14 original populations remained and the remaining ones were endangered or hovering on the brink of extinction. George's discovery as the sole surviving tortoise on Pinta came as a big shock 13 years later. For the next 40 years Lonesome George lived in Santa Cruz island where he became a tourist magnet. Unfortunately numerous attempts to help him procreate failed and he died two years ago without any descendants.

Man is the main culprit here. For centuries, pirates, whalers, fishermen and sundry other sailors nabbed the tortoises for food without regard to the impact and no limits on how many could be collected. People also introduced animals such as rats, pigs, dogs and ants that prey on the tortoises' eggs and their young. The final blow was the introduction of goats and donkeys that consumed much of the tortoise habitat.

Now, conservationists, scientists and Galápagos National Park personnel are working to bring back some of those tortoise populations that can still be saved. 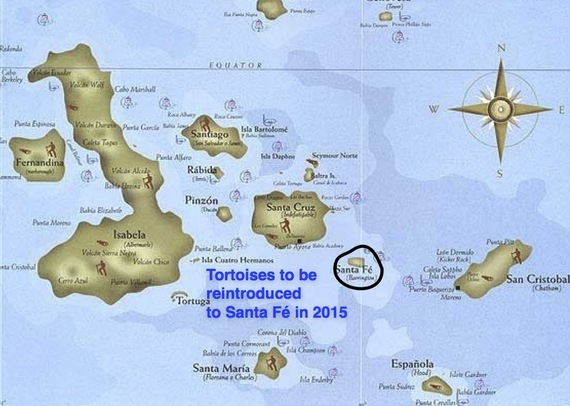 In the spring of 2015, if things go according to plan, tortoises will return to Santa Fé Island for the first time in 150 years. 200 young Española tortoises, genetically similar to the Santa Fé type, will be released on Santa Fé under a program called the Giant Tortoise Restoration Initiative, a joint effort by the Galápagos National Park Service, the Charles Darwin Fondation and international scientists.

"The release will take place once the rains return and the island greens up again, which will help to ensure their initial survival," Wacho Tapia, director of the initiative, wrote on the Galapagos Conservancy's website.

The fact that there are any tortoises at all to repopulate the island is remarkable, considering that only 14 of them remained on Española when the rescue efforts first began. Those efforts included shipping the tortoises to Santa Cruz Island to be bred in captivity.

The San Diego Zoo helped out by donating a male Española tortoise from its collection. As it turned out, and unlike George, that guy proved to be quite the stud, fathering hundreds of offspring and earning the monicker, "Super Diego." 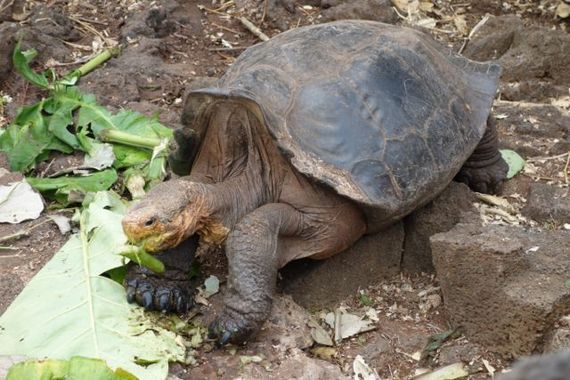 Successful breeding programs have resulted in the rebuilding of near-extinct populations and the repatriation of 1,700 tortoises to Española and 550 to Pinzón Island. In addition, 39 sterilized tortoises have been transplanted to Pinta Island to act as caretakers for the vegetation there while the park works on breeding a new population to replace the extinct Pinta tortoise.

This all came about after park officials made sure that the goats, rats and other introduced predators had been eradicated on those islands.

The International Union for the Conservation of Nature now lists the Galápagos tortoise as "vulnerable," a slight improvement from the "endangered" status it had in the 1980′s.

The work of Tapia and the others takes on new significance as crowds in New York will now be able to see George at the Museum of Natural History and learn about his legacy.

"George was the symbol of conservation efforts, not only in Galápagos but also worldwide," Galápagos National Park Director Dr. Arturo Izurieta said in an email to Galapagos Digital. And on Twitter, Izurieta posted: "His memory inspires our spirit to protect all species on the planet."