May 27 is Rachel Carson's birthday. Her legacy is very much alive here on Hog Island, Maine, where I spend my summers working to restore seabird populations that were once decimated.

As I write, a female osprey incubates three eggs in a nest that she and her mate have returned to every summer for the past five years. Since their return in April, hundreds of thousands of people around the world have tuned into a live cam to watch as the parents take turns on the nest, and gently rotate the eggs with their powerful talons. That these eggs are strong enough to protect developing chicks is a sign of the ongoing rebound for osprey. Like bald eagles, falcons, and other raptors, weak egg shells were symptomatic of DDT use cited by Rachel Carson in Silent Spring. Fittingly, the female osprey on this nest is named "Rachel" after Carson, born May 27, 1907. 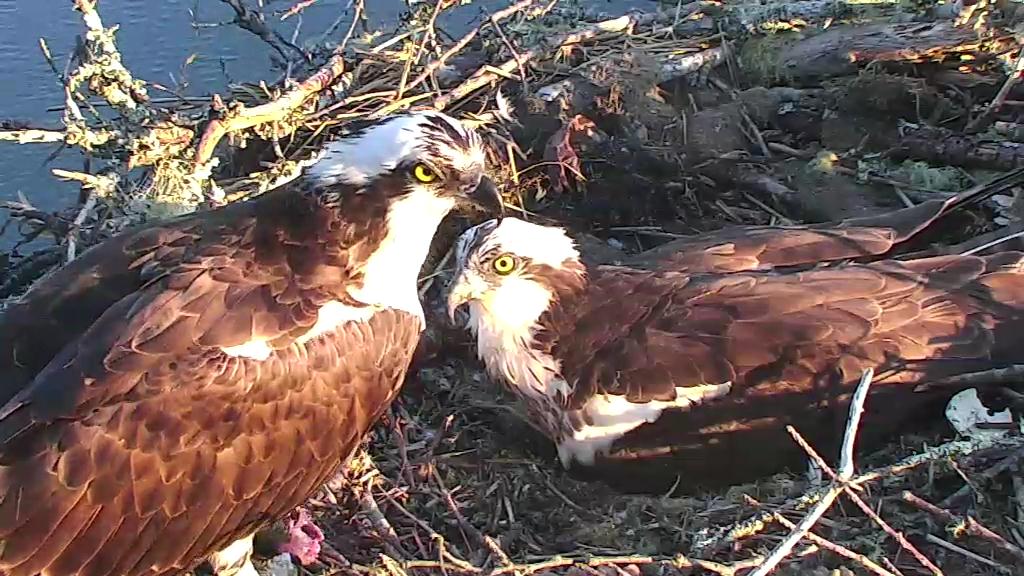 Carson's words are needed today as we confront the effects of climate change on our oceans. For starters, osprey love seafood just as much as we do in Maine. They are the only North American raptor that need a fish diet and have the ability to dive into water to catch its next meal. Ospreys are great anglers, hovering 30 to 100 feet above the water, before plunging vertically to snag live fish with their talons. Their toes are adapted for catching this slippery prey; twisting forward and backward to provide a sure grip. This flexibility is useful as they lift out of the water and begin to flap their wings, these talons turn the prey dead ahead to reduce drag.

In the 1950s, during rampant use of DDT, toxins collected in the fatty tissues of fish (and other animals.) Because raptors are at the top of the food chain, toxins affected their eggs, which broke during incubation. Now all seabirds confront another threat.

Ocean temperatures along the Gulf of Maine are on the rise. Yet we hear the same kind of skeptical voices that confronted Carson, despite record temperatures, the rise in carbon emissions, and extreme weather across the country. We should take courage from all that she confronted, and find like champions who defended her work.

Fifty-one years ago, Audubon magazine was threatened by a pesticide company, whose lawyers said that printing "a muckraking article" by Rachel Carson might "jeopardize" the "financial security" of magazine employees.

This threat did not faze Audubon President Carl W. Bucheister, who wrote:

"I recommend that all members of the National Audubon Society read Rachel Carson's new book, Silent Spring. ... We predict this book will cause a furor and if it does, it will serve an important purpose. In a free society, public controversy and discussion are essential forerunners of action, and action is urgently needed to regulate the unrestricted promotion and distribution of powerful chemical pesticides that are polluting our soils and water, destroying wildlife, and probably creating serious, long range hazards to man himself."

His words ran along an excerpt of Silent Spring the magazine published in 1962.

Fifty years later, Audubon ran another book excerpt by historian Doug Brinkley, whose Silent Spring Revolution revealed another champion. That ally was John F. Kennedy. I was fascinated to learn that President Kennedy read earlier books by Carson, The Sea Around Us and The Edge of the Sea. As a member of the Massachusetts Audubon Society, he wanted to make sure the shoreline remain unsullied, and the waters he sailed with his brothers were protected. On April 3, 1963, he was among 10 million viewers watching CBS Reports with Eric Severaid. The segment was "The Silent Spring of Rachel Carson."

She had a grasp on the meaning of ecology as tight as an osprey's grip:

"The balance of nature is built on a series of relationships between living things, and between living things and their environments. You can't just step in with some brute force and change one thing without changing many others. This doesn't mean we must never interfere, never tilt the balance of nature in our favor. But when we make the attempt we must know what we're doing. We must know the consequences."

My hope is that people watching the osprey cam on Hog Island will become more aware that we share the oceans as a resource, that by observing these birds, seeing their devotion as parents, you will become stewards for their continuing health.

The first break on the eggs should be from inside, and is known as a pip. So for all you pip watchers: Incubation for osprey eggs is 35 to 42 days; Rachel's first egg was laid April 26. Hatching could begin in the first week of June.