Some things should be left in the past and forgotten. Case in point: Tarzan. This modern version, The Legend of Tarzan, adds some politically correct touches to an old-fashioned (dated) story. But even with new gloss and a fresh scent, the central problem still remains: a near super human white man lording over apes, animals and Africans. It's an image that is dubious at best, and repulsive at its worst, even if well intentioned. 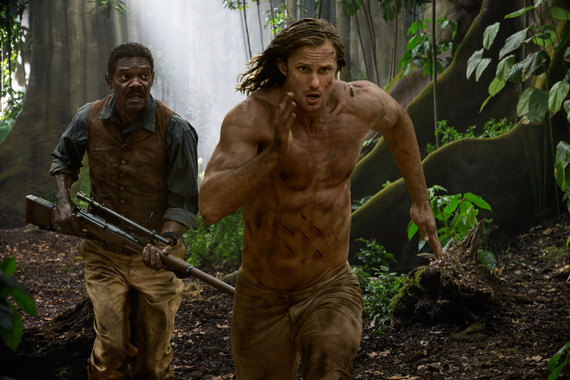 (Photo courtesy of Warner Bros. Pictures)
Samuel Jackson and Alexander Skarsgard in The Legend of Tarzan.

The script by Adam Cozad and Craig Brewer, based on the Tarzan stories created by Edgar Rice Burroughs, is set in the late 1800s after the man of the loincloth has relocated to England.

John Clayton III, the fifth Earl of Greystoke (Alexander Skarsgård, HBO's True Blood) is a member of the House of Lords. He's living comfortably in London with his wife Jane (Margot Robbie, Whiskey Tango Foxtrot). Everyone knows that even though he has a genteel demeanor, he was raised in the jungles of the Congo by apes.

Parliament has asked him to go to the Congo as a trade emissary. That's due to an invitation from Belgium's King Leopold who wants the world to know all the great things his country is doing for the region. Initially, Clayton is disinterested. He is convinced to go by George Washington Williams (Samuel L. Jackson), an American soldier-turned-humanitarian who believes the Belgians are secretly enslaving the Congolese. This argument convinces Clayton to return to his old surroundings, and his wife insists on accompanying him and Williams.

Little do they know that Clayton is being lured to his homeland by the king's duplicitous envoy, Capt. Leon Rom (Christoph Waltz, Inglourious Basterds). Rom intends to trade Tarzan's carcass for diamonds that are being held by the ape-man's old nemesis, Chief Mbonga (Djimon Hounsou, Gladiator), who wants him dead.

And so, director David Yates (Harry Potter and the Deathly Hallows: Part 2) takes the characters and the audience off into the deep dark jungles and sun-burned plains of Africa where painfully obvious CGI animals roam (The Jungle Book did this so much better), everyone is dressed meticulously (Ruth Myers, L.A. Confidential), huts and homes are color-coordinated (set decoration Anna Pinnock, Skyfall), jungles are pristine (production design Stuart Craig, Harry Potter and the Sorcerer's Stone) and everything looks rosy (cinematography Henry Braham, The Golden Compass). The spit and polish on this overly gleaming production doesn't bring a dose of reality and grit to what used to be a very earthy story.

As Clayton, Williams and Jane walk into a trap, and as Rom plots their demise, their backstories are told in annoying flashbacks that rob the film of momentum: Orphaned baby, raised by apes. Young ape-man meets daughter of a missionary. Ape-man kills man who killed his ape mom. A smarter script would have laid out the plot in chronological order to avoid so many distractions.

The anti-slavery and blood diamond themes add modern touches and concerns to an old vehicle. In addition, Samuel L. Jackson's character and Waltz's Rom are actually based on real people. But those are just footnotes in a complicated script that still can't lift the film's heavy baggage: A white savior rescuing black people and CGI apes. And in this poorly conceived rendition, Tarzan even has super human strength that allows him to annihilate busloads of rivals.

In the words of Shakespeare, "Something is rotten in the state of Denmark." Or to be more blunt, "This stinks." By the time Tarzan calls in all the animals of the jungle to help him in the grand finale, the film goes from tentatively intriguing, to slightly repulsive, to absurd and finally laughable.

Watching Skarsgård do action scenes is about as compelling as watching an Abercrombie & Fitch model do runway on an obstacle course. Granted, he has six-pack abs that will make female viewers swoon, but he lacks grit. (Johnny Weissmuller, one of the original Tarzan actors, must be turning over in his grave). Robbie's Jane has a token bit of bravery intertwined with a damsel in distress drawback, which means her character is brazen but falls when she's being chased by adversaries.

Waltz is suitably evil, a cliché emotion that is all too familiar with the characters he plays. Djimon Hounsou's rage as Chief Mbonga feels authentic, even if he's forced to wear a costume more fit for a Grace Jones video. Samuel Jackson's shtick, as the comical second banana in so many dubious movies, is growing tired. He deserves better material and so do his fans.

At one point Rom says, "A tribe of savages may try to eat him (Tarzan)." That was always the dismay with the old Tarzan movies: the way Africans were portrayed. And sure, in this film the biggest devil/savage is Rom, but still his utterances are revolting and will remind many why Tarzan movies were one part noble, and the other part degrading.

A new coat of paint can't hide the very dated premise of this misguided film. This is a revisionist tale that wasn't revised enough, or should have been left on a shelf.