I am staying at the beautiful Briars Inn located in the tiny town of Jackson's Point, home of my most cherished childhood memories.I am staying here with my ex- partner and now roommate Lorraine. Our cottage décor is shabby chic, complete with two bedrooms, two bathrooms and the piece de resistance, a working fireplace.

This afternoon, as Lorraine and I were going to the dining room for lunch, I decided to leave our glass door open, closing only the screen door so that my puppy Lucille would be able to feel the breeze from the beach.

When we returned from lunch I saw that the screen door was opened. My heart stopped, my stomach dropped... Lucille was gone. I ran to the beach calling her name "LUCILLE!! LUCILLE!!" but no answer.

Now completely in panic mode, I ran all the way back to the main hotel building, hoping by some miracle that someone had located Lucille and incredibly, someone had rescued my puppy. A woman named Ivy who was vacationing in one of the adjacent cottages had found Lucille!

Breathing a somewhat sigh of relief, I phoned the number of the woman who found Lucille. "Ivy is not home" her husband said "She's driving around looking for the dog's owner." Lucille was not wearing any collar as I had removed it after we went swimming in the lake this morning.

I wasn't certain how efficacious driving around town with a 5 lbs dog was, but I decided it was wise not to say anything and just wait until I heard from Ivy. One long hour later I got a distraught phone call from Ivy, saying that she had to leave the dog with the animal shelter, even though she had a bad feeling about it. Unfortunately Ivy had left her phone at home which was why her husband hadn't been able to reach her.

Ivy told me that as she was walking into the animal services building she had a bad feeling, so she told the woman at the front desk that she had changed her mind, and would be bringing the dog home with her. "That would not be allowed" said the woman "If you take this dog out of the building, we will charge you with the felony of dognapping!"

So my reluctant heroine left my puppy at the Georgina Animal Services. Now I just had to drive my geographically challenged self there and Lucille will be in my arms again. After some directional drama I arrived at Animal Services ready to pick up my pup, only to be told I needed ID. Shit. I ran out of the cottage so quickly that I had forgotten my wallet. I did not have ID on me but I did have a photo of Lucille on my phone. Nope. No go.

Ran back to my car, drove the 30 minutes to the cottage, grabbed my wallet and drove relatively quickly ( my version of quick is 60 mph) to the clinic where I procured my license. "Now may I please get my dog?" "No you may not, you must first a pay 25$ fee."

"Really? She was here for maybe 45 minutes tops!" "Well" she said "We had a vet check her out to make sure she did not get hit by a car." "You are fucking kidding me!!" I had reached my calm limit. "I think it would be very very clear what my 5 lbs dog would look like had she been hit by a car!" But then what could I do? They had me by the doggie cojones.

I paid the fee. "May I please get Lucille now? I asked in a docile voice. Nope, not yet. What in the name of Jesus is the issue now? I needed a leash, no dog was allowed out of the premises without one. I had not brought a leash with me, since I wasn't planning to take her for a walk. Luckily for a small fee (of course!) they would give me a leash. Fine! Anything! Finally one of the workers brought out a stunned looking Lucille. I grabbed Dougini and smooched her all over her tiny body and gave thanks to the doggie angels that had kept her safe. 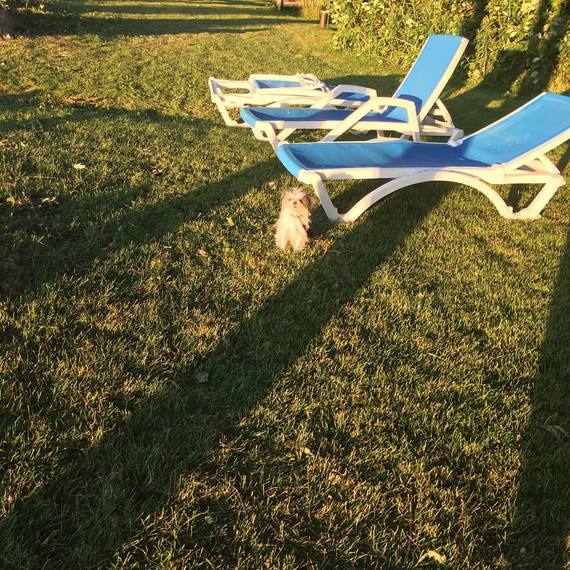